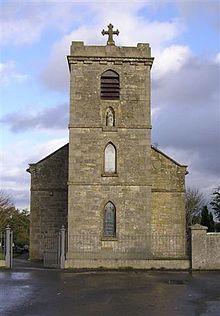 The old Catholic church in Maghery

Maghery (from Irish: an Machaire, meaning "the plain")[1] is a small village and townland in County Armagh, Northern Ireland. It lies on the southwest shore of Lough Neagh, near Derrywarragh Island, in the northwest corner of the county. As it sits between the estuaries of the rivers Blackwater and Bann (which are only two miles apart), Maghery was of strategic significance in the past.

In the 2001 Census Maghery had a population of 201 people. It lies within the Craigavon Borough Council area.

Maghery is a shortening of the older name Magherygreenan, which is anglicized from Irish: Machaire Grianáin.[1]

In the Maghery area there is a tradition of an ancient road between Armagh and Coney Island known as St Patrick's Trail, which in the past facilitated travel through Armagh to the north and the south of the county via causeways. Various stretches of this trail have also been identified in the neighbouring townland of Derrylileagh as well as a number of others in the locality.

EXTRACT from Belfast Newsletter 14th May 1894. 'NATIONALIST RIOTING NEAR PORTADOWN' ATTACK ON A FUNERAL PROCESSION. SEVERAL PERSONS SHOT. PORTADOWN, MONDAY. Yesterday, a serious party row took place at Maghery, a village situated on the shores of Lough Neagh, and distant about six miles (10 km) from Portadown. A man named Thomas Irwin died a couple of days previously at his residence in the townland of Cranfield, and his remains were yesterday removed for interment in Milltown graveyard. Irwin was an old and respected member of the Orange Institution, and his brethren of the Loughgall district turned out in considerable numbers to pay him their last tribute of respect. When passing through Maghery a most dastardly and cowardly attack was made on the procession. A Nationalist mob assailed the Orangemen, and endeavoured to beat them back with sticks and other weapons. Stones were showered into the procession, and the hearse was repeatedly struck with the missiles. A regular riot ensued, and in the fight which followed it is alleged that some of the Orange Party who were attacked in this disgraceful manner described fired revolver shots at their assailants. Two members of the Nationalist mob were shot though the wounds inflicted are said not to be of a dangerous character. A number of persons on both sides received wounds of a more or less serious nature inflicted with stones and other weapons used during the progress of the affray. Information was subsequently conveyed to Portadown, and District Inspector Bigley, Head Constable Donnelly, Sergeants Belford and McQueen, and all the available constables in both barracks drove out to the scene of the disturbances. Acting on information received some time after their arrival in Maghery, the police arrested two prominent members of the Orange party, and when conveying them to the Birches police barrack they were fired at by a crowd of Nationalists. Some of the police dismounted and pursued the crowd to the shores of the lough, where they arrested twelve members of the party. The peace officers subsequently found a loaded gun and powder cask convenient to the place where the shots were fired. Eye-witnesses of the occurrence state that the attack on the funeral procession was thoroughly organised, and that the Nationalist mob fought fiercely and with determination. The affair has naturally aroused considerable indignation and party feeling in the district surrounding Maghery, and the occurrence formed the sole subject of conversation in the neighbourhood yesterday and today. Captain Slacke, Divisional Commissioner, and Mr. Warburton, county inspector, visited the scene of the occurrence today and made inquiries respecting the affray. In the afternoon the prisoners were brought before Mr. N. L. Townsend, R.M. Armagh, in the Clonmacate Courthouse, Wm. John Vemer and David Fox, member of the Orange party, were charged with firing at and wounding Patrick Tennyson; and the following members of the Nationalist party were charged with unlawful assembly and firing shots: David Skelton, John McNally, James McHelly, Edward Robinson, William Donnolly, Daniel Gallagher, Henry Quinn, John McGrath, James McNally, Daniel Hagan, Joseph Hogan, and Francis Campbell. District Inspector Bigley, of Portadown, conducted the prosecution on behalf of the Crown: Mr. W. H. Wright, solicitor, Portadown, defended Verner and Fox, and the Nationalist prisoners were not professionally represented. After a number of depositions had been taken Mr. Townsend remanded the prisoners for eight days, accepting bail for the appearance of the Nationalist defendants themselves in $20 each, and two sureties of $10. His Worship refused to accept bail for the Protestant prisoners, Verner and Fox, who were charged with firing at and wounding, and they we accordingly conveyed to Armagh Jail this evening. During the affray two members in the Protestant party were wounded with revolver bullets. Their names are Eliza Wilson and Robert McMinn. It is said that the Nationalist defendants who fired at the police when they had Verner and Fox in custody will be charged with riot at a portion of the day prior to the time they were arrested. 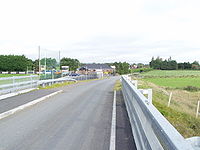 Gaelic games are the main sports played in the Maghery area; Maghery Sean MacDermott's GAC is the local GAA club.

Fishing is popular in Maghery. The River Blackwater is famed throughout Ireland for its big catches; boasting salmon, brown trout, pike, perch, roach, breem and eels.