Daniel Carlsson Solander or Daniel Charles Solander (19 February 1733 – 13 May 1782) was a Swedish naturalist and an apostle of Carl Linnaeus.[1] Solander was the first university educated scientist to set foot on Australian soil.

Solander was born in Piteå, Norrland, Sweden, to Rev. Carl Solander[1] a Lutheran principal, and Magdalena née Bostadia.[1] Solander enrolled at Uppsala University in July 1750 and studied languages and the humanities. The professor of botany was the celebrated Carolus Linnaeus who was soon impressed by young Solander's ability and accordingly persuaded his father to let him study natural history. Solander traveled to England in June 1760 to promote the new Linnean system of classification. He was an assistant librarian at the British Museum from 1763 onwards, and elected as Fellow of the Royal Society in the following year. Afterwards he held the position of Keeper of Printed Books at the British Museum. 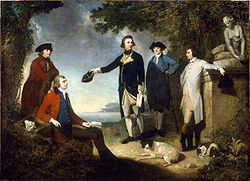 In 1768 Solander and his assistant Herman Spöring were employed by Joseph Banks, to join him on James Cook's first voyage to the Pacific Ocean on board the Endeavour. They were the botanists who inspired the name Botanist Bay (which later became Botany Bay) for the first landing place of Cook's expedition in Australia. Solander helped make and describe an important collection of Australian plants while the Endeavour was beached at the site of present-day Cooktown for nearly 7 weeks, after being damaged on the Great Barrier Reef. These collections later formed the basis of Banks' Florilegium.

On their return in 1771 Solander became Banks's secretary and librarian and lived in his house at Soho Square. In 1772 he accompanied Banks on his voyage to Iceland, the Faroes and the Orkney Islands. Between 1773 and 1782 he was Keeper of the Natural History Department of the British Museum. In 1773 he was elected a foreign member of the Royal Swedish Academy of Sciences.

Solander invented the book-form box known as the Solander box which is still used in libraries and archives as the most suitable way of storing prints, drawings, herbarium materials and some manuscripts.

It has been claimed that Solander deserves a great deal more recognition than he has received, and that he was denied his legacy by the high standing of Banks, who treated Solander, and Jonas Dryander before him, as his servants rather than as botanists of equal standing to others in the botanical establishment. The treatment and recognition of these two stands in contrast to that of Robert Brown, the third in the succession of Banks' botanists, who was feted as the pre-eminent botanist of his day. This contrast could be due to the fact that Brown was British, whereas the others were foreigners; or because Banks was already in decline by the time he employed Brown.[5]

Solander Gardens in the east end of London is named after him, as are the Solander Islands off New Zealand's South Island. One of the many plants named in his honour is Nothofagus solandri. Solander was associated with Banks in Illustrations of the Botany of Captain Cook's Voyage Round the World, and his The Natural History of Many Curious and Uncommon Zoophytes, Collected by the late John Ellis, (1786) was published posthumously.

The standard author abbreviation Sol. is used to indicate this individual as the author when citing a botanical name.[7]