Dapoli is a small town in the Ratnagiri district of Maharashtra in India.

Dapoli is 215 KM away from Mumbai.It is also called the "Mini Mahabaleshwar" (Mahabaleshwar is a hill station in Maharashtra) because of its cool climate throughout the year.dapoli is also the city which gave birth to many historic idols like Lokmanya Tilak, Sane Guruji, Maharshi Dhondo Keshav Karve, Rangler Paranjape,etc. It is close to the Arabian Sea (approx 8 km) and acts as the main town (Taluka Headquarters) for several other small surrounding villages such as Anjarle, Sarang, Bhopan, Harnai, Dabhol, Unhavare, Jaalgaon, Gimhavane, Asud, Vanand, Kherdi, Karde, Murud and Umberghar. Jaalgaon, a village in Dapoli, was awarded the 'sant gadgebaba gram swachatta' award for cleanest village by the Maharashtra government. Dapoli is a place where Dr, B.S. Konkan krishi Vidyapeeth is situated. This is one of the finest Agricultural University in India. Dapoli is nowadays developing as a tourist destination due its climate, tourist places, sea-beaches, coconut plants, mangoes,etc. Dapoli is separated from the Sayhadri range by the Khed taluka. Dapoli has a seaboard of 50 km which stretches from Burondi, Kelshi to Dabhol. The coastline differs little in its general characteristics from that of other parts of Kokan. It is densely covered by coconut farms. The principal rivers are Bharja in the north and Vashishthi in the south. There is also a small river called Jog which flows through Sarang, Tadil and into the Arabian sea.

Despite being about 7 km away from the coast of Arabian sea, the town is located at an altitude of around 800 feet. 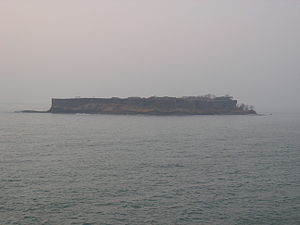 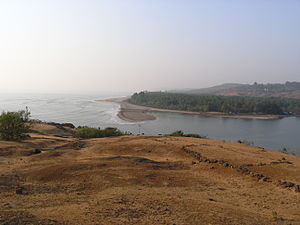 It has a very old school named after British citizen Alfred Gadney. During the time of the English empire, Dapoli was a military camp for the British soldiers. Dapoli is also famous for being the home of one of the four Agricultural Universities in Maharashtra. It is named for Dr. Balasaheb Sawant Kokan Krishi Vidyapeeth.

Located 17 km from Dapoli at Harnai, the Suvarnadurg fort consists of two forts. Kanakdurga is the land fort and Suvarnadurga is the sea fort. The forts were originally built by the Adil Shahi dynasty and later captured and fortified by Chatrapati Shivaji Maharaj in 1660. Once there was a tunnel connecting both the forts but now the only way to get to Suvarnadurga is by boat. However, currently there is no regular boat service to the fort and one has to arrange for a ferry from the local fishermen. There is a lighthouse inside the Kanakdurga fort.

Located on the Dapoli-Dabhil Pangari road is a place called Panhalekaji and can also be accessed from Khed via Vakavali & Tetavali. The “Leni” or caves at Panhalekaji are a must-see. You can drive up to the caves. The place is situated deep in the valley near the confluence of the ‘Kotjai’ and ‘Dhakti’ rivers. You can watch many birds and reptiles in the surrounding jungle and river. There are 29 caves and many sculptures around the area. The whole area is very beautiful. The carvings in these caves are from many periods from the 3rd century to the 14th century. [1]

There are natural hot water springs at Unhavare Village, which is 35 km from Dapoli (Near Panhalekaji caves). Unhavare, 21 km from Vakavali & 17 km from Tetavali's is Dr. Deodhar farms (called keshav Baug) Dr Deodhar is a Expert In Algae from Bombay University, Has a guest house for tourists. The Hot springs are its only attraction. Lots of people from surrounding areas come here regularly to bath in the Hot Sulphur water springs. Separate shelters are made for men and women to take a dip in the rejuvenating hot water. The water is said to cure skin ailments. There are no charges for taking a bath here. There is a small masjid as well as school opposite to hot water. There is also "Mahamai Gram Devata Mandir" as well as "Vidya Mandir High School,starwin cricket ground &Beautiful granad mosque farare"

This Ganesh temple is at Anjarle village which comes under Dapoli taluka. Anjarle is famous for the "Kadyawarcha Ganpati" (Ganesh temple situated on a cliff). This ancient and magnificent Ganesh temple was originally constructed using wooden pillars in around 1150AD. It was renovated during the period between 1768 and 1780. At one time, people used to cross Anjarle creek (Jog River) in a boat and then climb the hill using steps that go through the Anjarle village. Recently a bridge has been constructed and you can take your car right up to the entrance of the temple.

The Ganesh idol is right-sided. This means that its trunk curves towards the right, ("Ujwya Sondecha Ganpati") which is very rare. Kadyawarcha Ganpati is the live deity (a jagrut daiwat) who responds to distress calls of common people (nawsala pavnara Ganpati). The temple has a stone staircase on the right hand side to reach to the top of the temple (Kalas). You can get a magnificent view of the thick plantation of coconut trees, betel nut trees, Suvarnadurg Fort, blue sea and surrounding hills from the top. There is a pond in front of the temple where you can feed big fish and turtles. Beside the Ganesh temple there is a small but beautiful temple of Lord Shiva.

This location is between Dapoli and Asud Pul. It is said that this temple is "pandavkaleen" meaning that it has its origin more than 1000 years ago. The access is via Dabkewadi and after crossing the small river, the steep climb is refreshing. At this elevation, the fresh water is a marvel and is said to be originating from a tree trunk. this fresh water flows for 24/7 and throughout the year. The SHREE KESHAVRAJ "murti" is worth the darshan.

Murud is a small town on the sea coast, about 12 kilometers from Dapoli. It boasts of one of the most beautiful and longest beach in Konkan region.

At the centre of the town is the Durga Devi Temple. This temple was built in the 18th century and has 28 exquisitely carved wooden pillars supporting the main porch. On the left of the entrance is a huge bell. This is supposed to have been captured by Chimji appa Peshwa from the Portugese in Vasai.

Dhondo Keshav Karve was born in Murud. The town's main square has a bust of this great personality.

Dabhol is a port which is 28 km away from Dapoli. The famous Dabhol Power Station is erected near Dabhol by Enron, Which is now known as Ratnagiri Gas and Power private limited. Ratnagiri Gas and Power Private limited (RGPPL) was incorporated under the Companies Act, 1956 on 8 July 2005 and is promoted by NTPC Limited and GAIL (India) Limited. The company was set up to take over and revive the assets of Dabhol Power Company Project. RGPPL owns an Integrated Power generation and Re-gasified LNG facility. The power station is India's largest operating gas based combined cycle power station.

An ancient temple Chandika Devi temple is there in Dabhol. From past few years a ship manufacturing company has been established in dabhol. Bharati Shipyard Ltd is the foremost privately operated shipyard in terms of building facilities in India. BSL has earned its reputation by constructing a large array of specialized sophisticated vessels for diverse offshore, coastal and the marine market sectors. BSL product range includes highly maneuverable and power packed offshore vessels including AHTS, PSV’s and MSV’s of varying bollard pulls, Tractor and ASD tugs, state of the art dredgers, deep sea fishing vessels, cargo and container ships, tankers and Ro- Ro Vessels.

The synergy of operating from six locations enables BSL to have a tremendous amount of flexibility and construct a large number of vessels in a limited time period. Shipyards are well equipped with requisite facilities such as slipways, large fabrication shop, outfit berths & basins, granty cranes and mobile cranes etc. BSL is currently expanding and modernizing its production facilities with plans to expand nationally, in order to build larger vessels over 200 meters in length and oil exploration rigs, the first of which is already being constructed now at our shipyard in Dabhol.

Accredited with ISO 9001 – 2000 BVQI France VSL holds its head level with International builders. BSL also has earned International Code for the security of ships and of Port facilities (ISPS Code) issued by the Directorate General of Shipping. Ministry of Shipping has also recently been obtained process is in for certification under ISO 14001 and OHSAS.