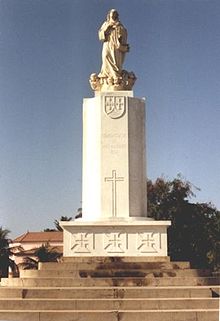 The country was divided into two dioceses; Dili and Baucau. A third diocese was created in 2010, the Diocese of Maliana. These dioceses are immediately subject to the Holy See.

The Apostolic Nuncio to East Timor is concurrently the nuncio to Indonesia.[2] The current nuncio is Italian archbishop Leopoldo Girelli, and the nunciature is located in Jakarta.[3]

In the early 16th century, Portuguese and Dutch traders made contact with East Timor. Missionaries maintained a sporadic contact until 1642 when Portugal took over and maintained control until 1974, with a brief occupation by Japan during World War II.[4]

Indonesia invaded East Timor in 1975 and annexed the former Portuguese colony. The Church played an important role in society during the Indonesian occupation of East Timor. While just 20% of East Timorese called themselves Catholics at the time of the 1975 invasion, the figure surged to reach 95% by the end of the first decade after the invasion. During the occupation, Bishop Carlos Ximenes Belo became one of the most prominent advocates for human rights in East Timor and many priests and nuns risked their lives in defending citizens from military abuses. Pope John Paul II's 1989 visit to East Timor exposed the occupied territory's situation to world media and provided a catalyst for independence activists to seek global support. Officially neutral, the Vatican wished to retain good relations with the Indonesia, the world's largest Muslim nation. Upon his arrival in East Timor, the Pope symbolically kissed a cross then pressed it to the ground, alluding to his usual practice of kissing the ground on arrival in a nation, and yet avoiding overtly suggesting East Timor was a sovereign country. He spoke fervently against abuses in his sermon, whilst avoiding naming the Indonesian authorities as responsible.[5] The Pope spoke out against violence in East Timor, and called for both sides to show restraint, imploring the East Timorese to "love and pray for their enemies." [6]

In 1996, Bishop Carlos Filipe Ximenes Belo and José Ramos-Horta, two leading East Timorese activists for peace and independence, received the Nobel Peace Prize for ""their work towards a just and peaceful solution to the conflict in East Timor".[7][8]

A number of priest and nuns were murdered in the violence in East Timor that followed the 1999 Independence referendum. The newly independent nation declared three days of national mourning upon the death of Pope John Paul II in 2005.[9]

The Roman Catholic Church remains very involved in politics, with its 2005 confrontations with the government over religious education in school and the forgoing of war crimes trials for atrocities against East Timorese by Indonesia.[10] They have also endorsed the new Prime Minister in his efforts to promote national reconciliation.[11] In June 2006 Catholic Relief Services received aid from the United States to help victims of months of unrest in the country.[12] The number of churches has grown from 100 in 1974 to over 800 in 1994.[13]