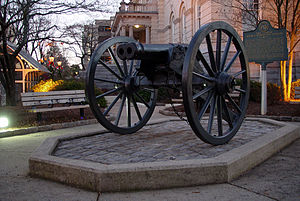 A frontal view of the double-barreled cannon.

The double-barreled cannon is an American Civil War-era experimental weapon and is now a modern landmark located in Athens, Georgia. While originally built for warfare, the cannon never saw battle. 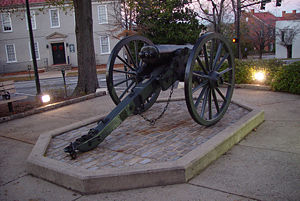 A view from behind of the double-barreled cannon.

In 1862 John Gilleland, dentist, builder and mechanic, designed the double-barreled cannon. It was cast in Athens, Georgia, for a cost of $350. The two barrels have a divergence of 3 degrees, and the cannon was designed to shoot simultaneously two cannon balls connected with a chain to "mow down the enemy somewhat as a scythe cuts wheat".

Gilleland's invention was a failure. First tested on 22 April 1862, and aimed at a target of two upright poles, uneven combustion of the powder and casting imperfections in the barrels gave the connected balls a spinning movement in an off-center direction, with witnesses reporting that on its first firing it "plowed up about an acre of ground, tore up a cornfield, mowed down saplings, and then the chain broke, the two balls going in different directions."[1]

On its second firing the chain shot across the horizon and into a thicket of pine. "[The] thicket of young pines at which it was aimed looked as if a narrow cyclone or a giant mowing machine had passed through", reported another witness.[1]

On its third firing the chain snapped immediately and one ball tore into a nearby cabin, knocking down its chimney, the other spun off erratically and struck a nearby cow, killing it instantly. Gilleland considered the test-firings a success.[1] 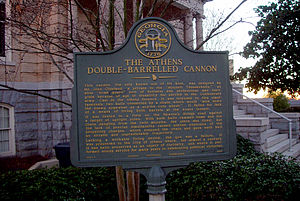 The commemorative plaque at the site of the cannon.

On 27 July 1864, the cannon was fired after a report was heard of several thousand Union soldiers approaching Monroe, Georgia. However, this report turned out to be false. The cannon disappeared in 1891 and was found again ten years later under a rock pile by a boy looking for lizards. The cannon was most likely intentionally buried, although this cannot be substantiated, it is certain that a natural earth formation did not aid in its concealment.

Currently, the cannon is on display on the front lawn of the City Hall of Athens, Georgia. A local landmark and public curiosity, the cannon is one of the most popular and well-known attractions in the city. It is still pointing northward in a symbolic gesture of defiance against the North it was built to fight. 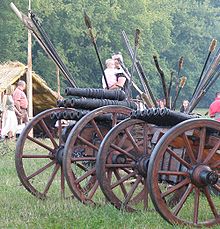 While the cannon preserved at Athens is the most famous double-barreled cannon, it is not the only one. Another notable example was called Elizabeth-Henry, named after Charles I's youngest children.[2] It was used by the Cavaliers during the English Civil War, and fired 2oz charges. It could also fire grapeshot. The barrels were wrapped in leather to prevent rusting.

Multi-barreled cannons have also been built in India, and an example with 6 barrels, similar to the ribauldequins of the Middle Ages, has been preserved in the Nehru Scientific Center.[3]

In Poland, cannons with as many as seven barrels were in use in the 16th century. These were similar to the volley guns and organ battery of the 19th century, but in a larger caliber.