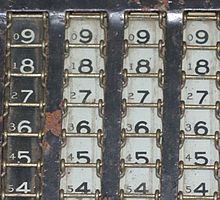 In mathematics and computing, the method of complements is a technique used to subtract one number from another using only addition of positive numbers. This method was commonly used in mechanical calculators and is still used in modern computers. To subtract a number y (the subtrahend) from another number x (the minuend), the radix complement of y is added to x and the initial '1' of the result is discarded. Discarding the initial '1' is especially convenient on calculators or computers that use a fixed number of digits: there is nowhere for it to go so it is simply lost during the calculation.

The radix complement of an n digit number y in radix b is, by definition, bn − y. Adding this to x results in the value x + bn − y or x − y + bn. Assuming y ≤ x, the result will always be greater or equal to bn and dropping the initial '1' is the same as subtracting bn, making the result x − y + bn − bn or just x − y, the desired result.

The first "1" digit is then dropped, in an effort to keep the same digits as the original, giving 654. This is not yet correct. We have essentially added 999 to the equation in the first step. Then we remove 1000 when we drop the first 1 in the answer (above) this will make the answer we get one less than the correct answer. To fix this, we must add 1 to the answer.

If the subtrahend has fewer digits than the minuend, leading zeros must be added which will become leading nines when the complement is taken. For example:

The method of complements is especially useful in binary (radix 2) since the ones' complement is very easily obtained by inverting each bit (changing '0' to '1' and vice versa). And adding 1 to get the two's complement can be done by simulating a carry into the least significant bit. For example:

The method of complements normally assumes that the operands are positive and that y ≤ x, logical constraints given that adding and subtracting arbitrary integers is normally done by comparing signs, adding the two or subtracting the smaller from the larger, and giving the result the correct sign.

Let's see what happens if x < y. In that case, there will not be a "1" digit to cross out after the addition since x − y + bn will be less than bn. For example (in decimal):

This is obviously the wrong answer; the expected answer is -144. But it isn't as far off as it seems; 856 happens to be the ten's complement of 144. This issue can be addressed in three ways:

The method of complements was used in many mechanical calculators as an alternative to running the gears backwards. For example:

The method of complements was used to correct errors when accounting books were written by hand. To remove an entry from a column of numbers, the accountant could add a new entry with the ten's complement of the number to subtract. A bar was added over the digits of this entry to denote its special status. It was then possible to add the whole column of figures.

Complementing the sum is handy for cashiers making change for a purchase from currency in a single denomination of 1 raised to an integer power of the currency's base. For decimal currencies that would be 10, 100, 1,000, etc., e.g. a $10.00 bill.

In grade schools, students are sometimes taught the method of complements as a shortcut useful in mental arithmetic.[1] Subtraction is done by adding the ten's complement of the subtrahend, which is the nines' complement plus 1. The method is generally only applied when it is clear that the difference will be positive. The same technique works for subtracting on an adding machine.