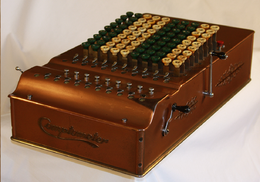 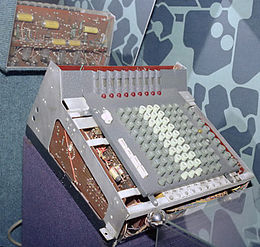 The comptometer was the first commercially successful key-driven mechanical calculator, patented in the USA by Dorr E. Felt in 1887.

A key-driven calculator is extremely fast because each key adds or subtracts its value to the accumulator as soon as it is pressed and a skilled operator can enter all of the digits of a number simultaneously, using as many fingers as required, making them sometimes faster to use than electronic calculators. Consequently, in specialized applications, comptometers remained in use in limited numbers into the early 1990s, but with the exception of museum pieces, they have all now been superseded by electronic calculators and computers.

Manufactured without interruption from 1887 to the mid 1970s it was constantly improved; first it was made faster and more reliable, then a line of electro-mechanical models was added in the 1930s, but especially it was the first mechanical calculator to receive an all-electronic calculator engine in 1961, with the ANITA Mark VII model released by Sumlock Comptometer, therefore creating the link in between the mechanical and the electronic calculator industries.

Although the comptometer was primarily an adding machine, it could also do subtractions, multiplication and division. Its keyboard consisted of eight or more columns of nine keys each. Special comptometers with varying key arrays were produced for a variety of special purposes, including calculating currency exchanges, times and Imperial weights. The name comptometer was formerly in wide use as a generic name for this class of calculating machine. 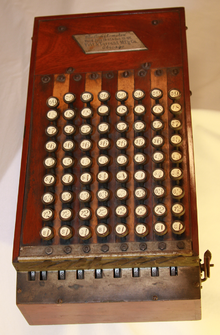 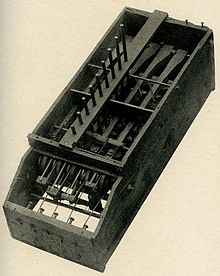 The comptometer is the direct descendant of the key-driven machine of Thomas Hill [1] patented in the USA in 1857 and of the Pascaline invented by Blaise Pascal in France in 1642. By just replacing the input wheels of the Pascaline by the columns of keys of Hill's machine, the comptometer was invented. Addition is performed exactly the same way, and both the Pascaline and the Comptometer make use of the 9's complement method for subtraction, but in the case of the comptometer it is the operator who must choose the right keys for the subtrahend (each key has its 9's complement written in miniature letter next to it).

Dorr Felt started his first prototype during the US Thanksgiving holidays of 1884. Because of his limited amount of money, he used a macaroni box for the outside box, and skewers, staples and rubber bands for the mechanism inside. It was finished soon after New Year's Day, 1885. This prototype, called the macaroni box,[2] is in the Smithsonian Institution in Washington, D.C., USA.

Shortly after, Robert Tarrant, the owner of a Chicago workshop, gave Mr. Felt a salary of $6 a week, a bench to work on and what would add up to $5,000 to build his first practical machine which he finished in the autumn of 1886.

By September 1887, eight production machines had been built. 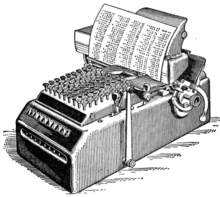 Two years later, on June 11, 1889, he was granted a patent for the Comptograph.[5] A Comptograph is a comptometer with a printing mechanism making it more like a key-set calculating machine (even though the keys are registered as they are typed and not when a handle is pulled) therefore slower and more complicated to operate. It was the first printing-adding machine design to use individualized type impression which made its printed output very legible.

The first comptograph was sold to the Merchants & Manufacturers National Bank of Pittsburgh, PA. in December 1889. It was the first sale of a recording-adding machine ever. This machine is now on display at the Smithsonian Institution in Washington, D.C..

The Felt & Tarrant Manufacturing Company built both comptometers and comptographs throughout the 1890s. In 1902, the Comptograph Company was setup to manufacture comptographs exclusively, unfortunately it was shut down at the beginning of World War I.

Forty years later, in the mid 1950s, the Comptometer Corporation reused the name Comptograph for a line of 10 key printing machines.

The comptometer was the first machine in production to challenge the supremacy of the arithmometer and its clones; but not immediately, it took almost three years to sell the first hundred machines.[6] 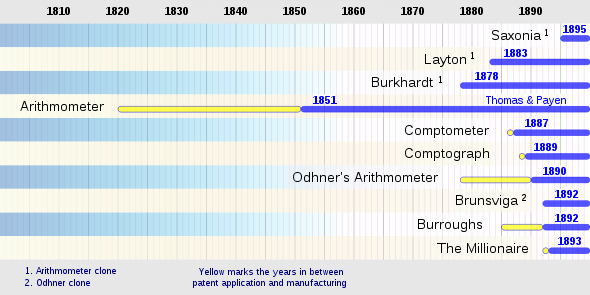 Desktop Mechanical Calculators in production during the 19th century

Felt and Tarrant signed a partnership contract on November 28, 1887. The partnership was incorporated as Felt & Tarrant Manufacturing Company on January 25, 1889.[7]

In 1902, Felt and Tarrant parted ways in creating a second company and decided to split the shares of both companies so that one would own the controlling interest of a company with 51% of the shares and the other would still share the profits with the remaining 49% of the shares. Mr. Felt became the majority owner of the Felt & Tarrant Manufacturing Company and Mr. Tarrant became the majority owner of the Comptograph Company.[8] The Felt & Tarrant Manufacturing Company reabsorbed the Comptograph company at the beginning of World War I

The Felt & Tarrant Mfg Co became public in 1947 and changed its name to the Comptometer Corporation in 1957.[9] 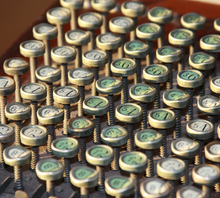 Two major improvements happened during the first years of production: the first was the insertion of carry inhibit push buttons for quicker operations of subtraction and the second was the color grouping of the columns of keys (three by three except for the first two columns that represent hundredths). Mr. Felt continually improved his machine with seven patents filed during the first ten years. These included the patents that he took for the Comptograph.

Each row of keys is differentiated from the one above and the one below by a different tactile feel: the even rows have round and raised keys and the odd rows have flat and oblong keys. The keys of the first machines, with their metal rims, are similar to the typewriters keys of the same period. Plastic keys were also introduced very early on but their rows do not have that tactile difference.

All the models, from this one on, have a metal casing, but the model A has a polished glass panel for the output display in the front. This model is produced from 1904 to 1906.

Described in patents 762,520 and 762,521, it introduces a new carry mechanism that reduces the power needed to operate the keys to one fourth of its predecessor's. It also introduces the duplex feature that allows for keys to be pressed simultaneously.[11] And finally it introduces a simplified clearing mechanism that only requires one lever, and one back and forth motion of it, to reset the machine. "The machine gun of the office" as it was called in some WWI advertisements,[12] was starting to develop the form and mechanism that it would keep for the next forty years.

These models are built from 1907 to 1915. They all have the shoebox metal casing that will be used until the end of World War II. 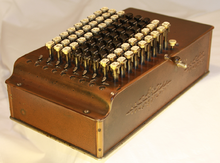 Very few machines of this type were built, but all were made between 1913 and 1915. This was a transition machine that introduced the Controlled-Key which was part of an error detection mechanism that blocked most of the keyboard if a key was not pressed enough to add its total to the result. When this mechanism was activated, all the columns of keys were blocked except for the one where the error occurred. Therefore the operator could find the column in question, reenter the number and unlock the keyboard by pressing the Controlled-Key in order to resume the operations.

Each key was supported by a metal plate that wrapped around it on three sides. This created a support that was used to block the key when the error detection mechanism was activated. The blocking mechanism was moved inside the box in the following models.

The production of this model started in 1915 and lasted five years. The error detection mechanism is moved inside the box and the Controlled-Key is red. This machine is the last machine without the Comptometer logo inscribed on its front and back panels.

Manufactured from 1920 until the beginning of World War II, these models incorporate all of the improvements of the previous machines. The Comptometer logo is inscribed on their front and back panels and they have the red Controlled-Key that was introduced with the previous two models.

These three models are the last of the shoebox design that was introduced in 1907 with the B model.

This electric model was introduced in the middle of the 1930s and had a very moderate success since the mechanical models were very easy to operate and less expensive to maintain. 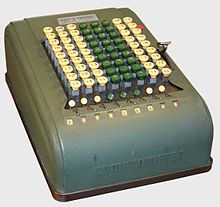 Introduced just before World War II, it had a new box design which was more symmetrical and rounder in shape. The WM was manufactured during World War II with a less wasteful use of material for the mechanism.

The WM had many aluminum parts which were more prone to failure so the use of steel was resumed as soon as steel again became available. While the machine was lighter, is was also weaker. 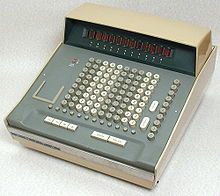 The ANITA mark VIII sold from 1962 in Britain

The models become lighter with the use of aluminum and more refined inner mechanical designs. Both mechanical and electric models are offered. Their outside is similar to the model M machines. The model 3D11 succeeds to the model M and the electric model 992 succeeds to the model K. The major external appearance change of the 3D11 & 992 , the keys were two tones of green with a fuller depth almost twice the old original style. making identification very easy. Also the lock release key (red) was moved from the upper right corner of the keyboard to the center and just below the 'one' keys so it could be thumb operated. On model K electrics the motor was turned on with a switch and ran continuously during use. The 992 had a micro switch which started the motor at the start of any key depression and shut off after key action competed. This reduced the motor wear to almost nil.

The most important new designs of this period came from the Sumlock comptometer Ltd company that introduced the first all-electronic desktop calculators almost two years before the competition. They were the ANITA Mark VII, first introduced in 1961 and marketed in Continental Europe and the ANITA Mark VIII, a slightly improved design, introduced at the same time, marketed in Britain and the rest of the world. They both started shipping in 1962.

The last ANITA machine with a Comptometer keyboard was the ANITA mk 10 introduced in 1965, still using cold-cathode switching tubes and that will be replaced in 1968 by the ANITA mk 11, a 10 key machine.

Incidentally, Sharp's first all transistor desktop calculator, the CS-10A COMPET, introduced in the summer of 1964, also had a Comptometer type keyboard.