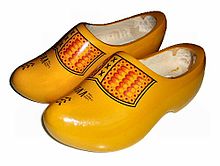 Dutch (poplar) clogs, for every day use. The red painting on top makes the clogs look like leather shoes. It is a traditional motif on Dutch clogs. Painted and unpainted clogs are sold and worn throughout the Netherlands.

A clog is a type of footwear made in part or completely from wood.

The Oxford English Dictionary[1] defines a clog as a "thick piece of wood", and later as a "wooden soled overshoe" and a "shoe with a thick wooden sole". Clogs are found in three main varieties: whole foot, wooden soled and overshoes. Whole foot clogs make the complete shoe out of wood, such as the familiar Dutch pattern clogs. Wooden soled clogs use wood for the sole only, the uppers are made from leather or similar material (for instance Swedish and English clogs). Overshoes are wooden soles with straps designed to be worn over other footwear for protection.

Whole foot clogs need to be close fitting and can be secured by curling the toes. Wooden soled clogs are fastened by laces or buckles on the welt and therefore the toes are relaxed as in shoes. Most clogs have a rounded sole, the toe rising upwards. This enables the wearer to roll the foot when walking or running, rather than flexing it as with shoes. Some overshoes do not have this feature, relying instead on raised "feet" on the sole about which the foot can pivot.

Clogs are traditionally worn by workers as protective clothing in some factories, mines and farms. They may have steel toecaps and/or steel reinforcing inserts in the undersides of the soles.

Several different styles of dance use clogs. When worn for dancing an important feature is the sound of the clog against the floor. This is one of the fundamental roots of tap, but with the tap shoes the taps are free to click against each other and produce different sound to clogs.

Traditional clogs are made out of many different species of wood (willow, poplar, birch, beech, alder wood). Logs were cut into suitable lengths and each piece split in half lengthways to make a pair of soles. These were shaped with a roughing-out iron then left to dry for six to eight months. The seasoned soles were then shaped with a hollower and a channel cut with a gripper for the welt.[2]:101

They are associated with the Netherlands, Belgium, England, Denmark, Lithuania and Sweden (though Swedish clogs do not resemble Dutch clogs) as part of the touristic "Holland"/Sweden image, where they are seen as a form of national dress.

A French clog from Brittany

The French wooden shoe or clog (sabot) was, in the 18th and 19th century, associated with the lower classes. During this period, the years of the Industrial Revolution, the word sabotage gained currency. Allegedly derived from sabot, sabotage described the actions of disgruntled workers who willfully damaged workplace machinery by throwing their sabots into the works. However, according to some accounts, sabot-clad workers were simply considered less productive than others who had switched to leather shoes, roughly equating the term "sabotage" with "inefficiency".[3]

German clogs are like Dutch and French clogs in that they cover the top of the foot. Compare them to Swedish or British clogs which have wooden soles and leather uppers. 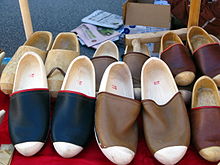 Clogs are traditional also in northern Italy and southern Switzerland, where they are part of the traditional local costumes. In Friuli, clogs are called, palotis, galosis or dalminis. They are traditionally made with an upward-pointing wooden sole and a leather hood.

Because of the long association of Dutch people and clogs, Dutch people are sometimes nicknamed clog-wearers or cloggies (although in England this term can refer to Lancashire, see below).[4] The long association of the Dutch with wooden clogs can be traced to the traditional creation myths of ancient Germanic tribes who originally occupied the Netherlands. Today, Dutch clogs are primarily a beloved tourist souvenir.[5]

Despite the fact that most Dutch no longer wear klompen (clogs) for everyday use, clogs remain popular among farmers, market gardeners and gardeners. The traditional all-wooden Dutch clogs have been officially accredited as safety shoes with the CE mark and can withstand almost any penetration including sharp objects and/or concentrated acids.[6] Some of the Dutch also consider wearing clogs as being healthy for the wearers' feet. 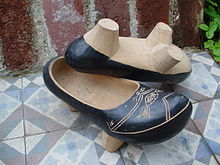 In Asturias, Cantabria and Galicia, the self-governing territories in northwestern Spain, there is a long tradition of making and wearing clogs. These Asturian and Cantabrian clogs are unusual in that they have two 'feet' on the ball of the foot (see picture of the Cantabrian clog, below); so that with the heel, the whole clog is elevated from the ground as a short elevated tripod. This is said to be useful when working outside or in the barn.[citation needed] These clogs are still worn in many rural northern Spanish villages today. Traditionally, this form of clog is worn as a patten-type overshoe: the dirty clog being kicked off at the door before entering the house (a slipper is worn inside the clog).

Traditional Gibson style English clogs made in Lancashire. Similar style clogs are made throughout the Kingdom. Note the plastic soling to protect the wood from wear.

In England, slats of wood held in place by thonging or similar strapping were known as "Pattens" and they were usually worn over leather or fabric shoes to raise the wearer's foot above the mud of the unmade road, not to mention commonly dumped human effluent and animal dung. Those too poor to afford shoes wore wood directly against the skin, and thus the clog was developed, made of part leather and part wood. The English tended to employ Welsh and West Country alder, Scottish birch and Lincolnshire willow for the soles. The Welsh favoured alder, birch & sycamore.[7] for their clog soles.

The wearing of clogs in Britain really took off with the Industrial Revolution, when workers in the mills, mines, iron, steel, and chemical works, workshops and factories needed strong, cheap footwear. Men and women wore laced and clasped clogs respectively, the fastening clasps being of engraved brass. Nailed under the sole at toe and heel were clog irons, called calkers[2] or cokers, 3/8" wide x 1/4" thick with a groove down the middle to protected the nail heads from wear. The heyday of the clog in Britain was between the 1840s and 1920s and, although traditionally associated with Lancashire, they were worn all over the country, not just in the industrial North of England.[8][9]

The Cloggies was a long running cartoon strip satirising Northerners. The cartoon popularised the existing use of cloggie to refer to people from the Northern industrial areas, particularly Lancashire.

Although associated in the popular mind with dancing, clogs are still used in industry and are available tested to EN345.[10] Such clogs are particularly advantageous in metal working industries where hot swarf or spashes of molten metal may be found on the floor.

Clog dancing should not be confused with Morris dancing which may be performed in clogs.

There is a theory that clogging or clog dancing arose in these industrial textiles mills as a result of the mill workers entertaining themselves by syncopating foot taps with the rhythmic sounds made by the loom shuttles. Clog dancing became a widespread pastime during this period in England. During the nineteenth century, competitions were held and professional clog dancers performed in the music halls.

Clog dancing is a continuing tradition in Wales. The difference between Welsh clogging and other step dance traditions is that the performance will not only include complicated stepping, but also 'tricks'. For example, snuffing out a lit candle with the dancer's feet, toby stepping - similar to Cossack dancing— and high leaps into the air.

Clog fighting, known in Lancashire as 'purring', was a combative means of settling disputes. Clog fighting and its associated betting by spectators was illegal.

It is all up and down fighting here. They fought quite naked, excepting their clogs. When one has the other down on the ground he first endeavors to choke him by squeezing his throat, then he kicks him on the head with his clogs. Sometimes they are very severely injured.
—Chris Brady[11]

Pattens are an overshoe variant of sandals or clogs meant to protect other footwear by either covering or elevating it above the street. Geta are Japanese elevated-sole wooden-shoes worn outside the house, and are also worn in Korea and elsewhere.

In the 1970s and 1980s, Swedish clogs became popular fashion accessories for both sexes. They were usually worn without socks and were considered suitable attire for the avant-garde man.

In the 1980s and 1990s clogs based on Swedish clogs returned in fashion for women. Platform clogs or sandals, often raised as high as 6 or even 8 inches right through between sole and insole, were worn in many western countries. The large mid layer was often made of solid cork, although some were merely of plastic with a cork covering. The sole, more often than not, was made of a light sandy-colored rubber. Some of the platforms of these clogs were encompassed about with a string-laced effect.

In 2007 Dutch designers Viktor & Rolf introduced high heeld Dutch clogs on the catwalk, with their winter collection of 2007/08.[12] In 2010, Swedish clogs for women returned again in Chanel's and Louis Vuitton's Spring / Summer 2010 collection.[13] 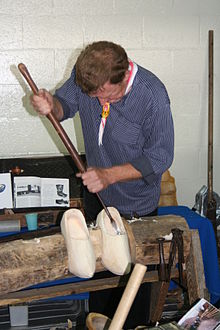