Equality of outcome, equality of condition, or equality of results is a controversial[1] political concept. Although it is not always clearly defined, it is usually taken to describe a state in which people have approximately the same material wealth or, more generally, in which the general conditions of their lives are similar. Achieving this requires reducing or eliminating material inequalities between individuals or households in a society. This could involve a transfer of income and/or wealth from wealthier to poorer individuals, or adopting other institutions designed to promote equality of condition from the start. The concept is central to some political ideologies and is used regularly in political discourse, often in contrast to the term equality of opportunity. A related way of defining equality of outcome is to think of it as "equality in the central and valuable things in life."[2] 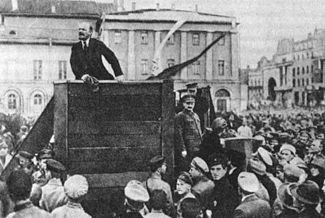 After the Russian Revolution of 1917, the political structure of the Soviet Union (1917–1989) tried to emphasize equality of outcome as a primary goal. Photo: Lenin addresses a crowd in Moscow in 1920.

In political philosophy, there are differing views whether equal outcomes are beneficial or not. One view is that there is a moral basis for equality of outcome, but that means to achieve such an outcome can be malevolent. Equality of outcome can be a good thing after it has been achieved since it reflects the natural "interdependence of citizens in a highly organized economy" and provides a "basis for social policies" which foster harmony and good will, including social cohesion and reduced jealousy. One writer suggested greater socioeconomic equality was "indispensable if we want to realise our shared commonsense values of societal fairness."[17] Analyst Kenneth Cauthen in his 1987 book The Passion for Equality suggested that there were moral underpinnings for having equal outcomes because there is a common good––which people both contribute to and receive benefits from––and therefore should be enjoyed in common; Cauthen argued that this was a fundamental basis for both equality of opportunity as well as equality of outcome.[18] Analyst George Packer, writing in the journal Foreign Affairs, argued that "inequality undermines democracy" in the United States partially because it "hardens society into a class system, imprisoning people in the circumstances of their birth."[19] Packer elaborated that inequality "corrodes trust among fellow citizens" and compared it to an "odorless gas which pervades every corner" of the nation.[19]

An opposing view is that equality of outcomes is not beneficial overall for society since it dampens motivation necessary for humans to achieve great things, such as new inventions, intellectual discoveries, and artistic breakthroughs. According to this view, wealth and income is a reward needed to spur such activity, and with this reward removed, then achievements which would benefit everybody may not happen.

If equality of outcomes is seen as beneficial for society, and if people have differing levels of material wealth in the present, then methods to transform a society towards one with greater equality of outcomes is problematic. A mainstream view is that mechanisms to achieve equal outcomes––to take a society and with unequal wealth and force it to equal outcomes––are fraught with moral as well as practical problems since they often involve force to compel the transfer.[18] 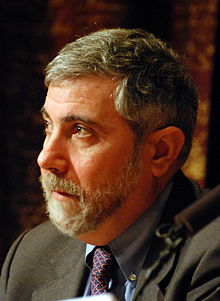 And there is general agreement that outcomes matter. In one report in Britain, unequal outcomes in terms of personal wealth had a strong impact on average life expectancy, such that wealthier people tended to live seven years longer than poorer folk, and that egalitarian nations tended to have fewer problems with societal issues such as mental illness, violence, teenage pregnancy, and other social problems.[20] Authors of the book The Spirit Level contended that "more equal societies almost always do better" on other measures, and as a result, striving for equal outcomes can have overall beneficial effects for everybody.[20]

Philosopher John Rawls, in his A Theory of Justice (1971), developed a "second principle of justice" that economic and social inequalities can only be justified if they benefit the most disadvantaged members of society. Further, Rawls claims that all economically and socially privileged positions must be open to all people equally. Rawls argues that the inequality between a doctor's salary and a grocery clerk's is only acceptable if this is the only way to encourage the training of sufficient numbers of doctors, preventing an unacceptable decline in the availability of medical care (which would therefore disadvantage everyone). Analyst Paul Krugman writing in The New York Times agreed with Rawls' position in which both equality of opportunity and equality of outcome were linked, and suggested that "we should try to create the society each of us would want if we didn’t know in advance who we’d be."[21] Krugman favored a society in which hard-working and talented people can get rewarded for their efforts but in which there was a "social safety net" created by taxes to help the less fortunate.[21] 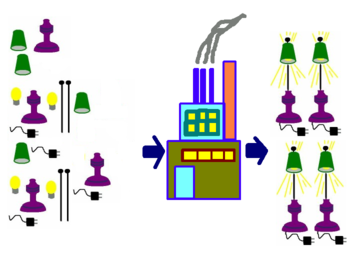 Both equality of outcome and equality of opportunity have been contrasted to a great extent. When evaluated in a simple context, the more preferred term in contemporary political discourse is equality of opportunity which the public, as well as individual commentators, see as the nicer or more "well-mannered"[14] of the two terms.[22] And the term equality of outcome is seen as more controversial which connotes socialism or possibly communism and is viewed skeptically. A mainstream political view is that the comparison of the two terms is valid, but that they are somewhat mutually exclusive in the sense that striving for either type of equality would require sacrificing the other to an extent, and that achieving equality of opportunity necessarily brings about "certain inequalities of outcome."[8][23] For example, striving for equal outcomes might require discriminating between groups to achieve these outcomes; or striving for equal opportunities in some types of treatment might lead to unequal results.[23] Policies that seek an equality of outcome often require a deviation from the strict application of concepts such as meritocracy, and legal notions of equality before the law for all citizens. 'Equality seeking' policies may also have a redistributive focus.

The two concepts, however, are not always cleanly contrasted, since the notion of equality is complex. Some analysts see the two concepts not as polar opposites but as highly related such that they can not be understood without considering the other term. One writer suggested it was unrealistic to think about equality of opportunity in isolation, without considering inequalities of income and wealth.[17] Another agreed that it is impossible to understand equality without some assessment of outcomes.[14] A third writer suggested that trying to pretend that the two concepts were "fundamentally different" was an error along the lines of a conceit.[20] 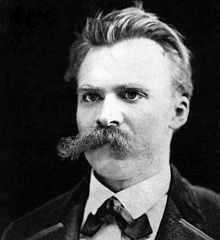 In contemporary political discourse, of the two concepts, equality of outcome has sometimes been criticized as the "politics of envy" and is often seen as more "controversial" than equality of opportunity.[14] One wrote that "equality of opportunity is then set up as the mild-mannered alternative to the craziness of outcome equality."[14] One theorist suggested that an over-emphasis on either type of equality can "come into conflict with individual freedom and merit."[18] The philosopher Friedrich Nietzsche did not like either type of equality and was opposed in principle to democracy, and he associated equality with what he termed "slave morality."[18]

Critics of equality of opportunity note that while it is relatively easier to deal with unfairness for people with different races or genders, it is much harder to deal with social class since "one can never entirely extract people from their ancestry and upbringing."[24] As a result, critics contend that efforts to bring fairness by equal opportunity are stymied by the difficulty of people having differing starting points at the beginning of the socio-economic competition. A person born into an upper-middle class family will have greater advantages by the mere fact of birth than a person born into poverty.[24]

While outcomes can usually be measured with a great degree of precision, it is much more difficult to measure the intangible nature of opportunities. That is one reason why many proponents of equal opportunity use measures of equality of outcome to judge success. Analyst Anne Phillips argued that the proper way to assess the effectiveness of the hard-to-measure concept of equality of opportunity is by the extent of the actual and easier-to-measure equality of outcome.[14] Nevertheless, she described single criteria to measure equality of outcome as problematic: the metric of "preference satisfaction" was "ideologically loaded" while other measures such as income or wealth were insufficient, according to her view, and she advocated an approach which combined data about resources, occupations, and roles.[14]

To the extent that incidental inequalities can be passed from one generation to another through substantial gifts and wealth inheritance, some claim that equality of opportunity for children cannot be achieved without greater equality of outcome for parents. Moreover, access and opportunity to various social institutions is partially dependent on equality of outcome. Proponents argue that rigging equality of outcome can be a force preventing co-optation of non-economic institutions important to social control and policy formation, such as the legal system, media or the electoral process, by individuals and coalitions of wealthy people.

A related argument is often encountered in education and more specifically in the debates on the grammar school in the United Kingdom and in the debates on gifted education in various countries. According to that argument, people by nature have differing levels of ability and initiative which lead some to achieve better outcomes than others. Therefore, it is considered impossible to ensure equality of outcome without imposing inequality of opportunity.

The concept in political argument 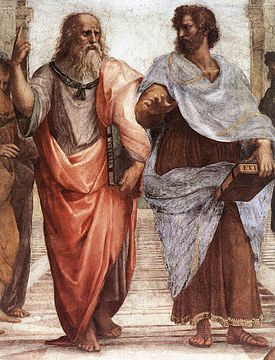 The concept of equality of outcome is an important one in battling between differing political positions, since the concept of equality, overall, was seen as positive and an important foundation which is "deeply embedded in the fabric of modern politics."[8] There is much political jousting over what, exactly, equality means.[8] It is not a new phenomenon; battling between so-called haves and have-nots has happened throughout human civilization, and was a focus of philosophers such as Aristotle in his treatise Politics. Analyst Julian Glover in The Guardian wrote that equality challenged both left-leaning and right-leaning positions, and suggested that the task of left-leaning advocates is to "understand the impossibility and undesirability of equality" while the task for right-leaning advocates was to "realise that a divided and hierarchical society cannot – in the best sense of that word – be fair."[26]