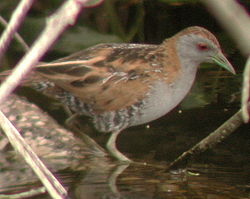 The Baillon's Crake (Porzana pusilla) is a very small waterbird of the family Rallidae.

Their breeding habitat is sedge beds in Europe, mainly in the east, and across Asia. They used to breed in Great Britain up to the mid-19th century, but the western European population declined through drainage. They nest in a dry location in wet sedge bogs, laying 4-8 eggs. This species is migratory, wintering in east Africa and south Asia.

It is also a resident breeder in Africa and Australasia. There is a single North American record of this species on Attu Island in September 2000.

They are 16–18 cm in length, and are similar to the only slightly larger Little Crake. Baillon's Crake has a short straight bill, yellow or green without a red base. Adults have mainly brown upperparts with some white markings, and a blue-grey face and underparts. The rear flanks are barred black and white. They have green legs with long toes, and a short tail which is barred underneath.

Immature Baillon's Crakes are similar to the adults, but have extensively barred underparts. The downy chicks are black, as with all rails. 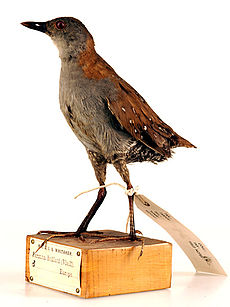 These birds probe with their bill in mud or shallow water, also picking up food by sight. They mainly eat insects and aquatic animals.

Baillon's Crakes are very secretive in the breeding season, and are then mostly heard rather than seen. They are then noisy birds, with a rattling call like that of the Edible Frog, or perhaps Garganey. They can be easier to see on migration or when wintering.

This bird is named after French naturalist Louis Antoine Francois Baillon. The names Marsh Crake and Tiny Crake have previously been used to refer to this species.

The Baillon's Crake is one of the species to which the Agreement on the Conservation of African-Eurasian Migratory Waterbirds (AEWA) applies.

Baillon's Crakes are not listed as threatened on the Australian Environment Protection and Biodiversity Conservation Act 1999. However, their conservation status varies from state to state within Australia. For example: