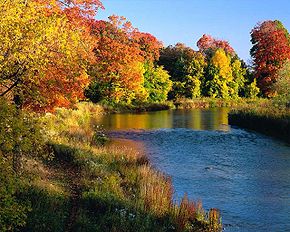 A typical day within a period of "Indian Summer"

An Indian summer is a meteorological phenomenon that occurs in the autumn. It refers to a period of considerably above normal temperatures, accompanied by dry and hazy conditions, usually after there has been a killing frost. Depending on latitude and elevation, the phenomenon can occur in the Northern Hemisphere between late September and mid November.

The modern use of the term is when the weather is sunny and clear, and above 21 °C (70 °F), after there has been a sharp frost; a period normally associated with late-October to mid-November.[1]

In some regions of the southwestern United States, 'Indian summer' is colloquially used to describe the hottest times of the year, typically in late July or August. But in the South, as elsewhere in the US, this period is more commonly known as the dog days, in reference to the position of Sirius, the 'Dog Star' and brightest star in the sky other than the sun. In the desert southwestern United States, where frost is rare, the term is sometimes used to refer to a brief period of hot dry weather which occurs after the hottest months and before the onset of winter rains, typically in October or November. It may also be used to refer to any unseasonably warm weather during the first few weeks of the rainy season, before the approach of spring.

The term 'Indian summer' is also used metaphorically to refer to a late blooming of something, often unexpectedly, or after it has lost relevance. This is comparable to the use of the term renaissance in the sense of 'revival', but it carries the added connotation that the revival is temporary. A famous use of the phrase in American literature is Van Wyck Brooks' New England: Indian Summer, a sequel to his Pulitzer Prize-winning The Flowering of New England.

The etymology of 'Indian summer' 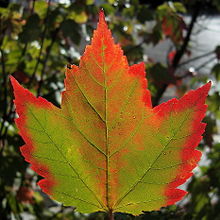 The expression 'Indian summer' has been used for more than two centuries. The earliest known use was by French-American writer John Hector St. John de Crevecoeur in rural New York in 1778: "Then a severe frost succeeds which prepares it to receive the voluminous coat of snow which is soon to follow; though it is often preceded by a short interval of smoke and mildness, called the Indian Summer." There are several theories as to its etymology: 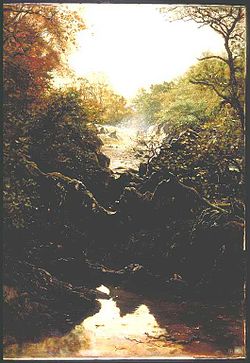 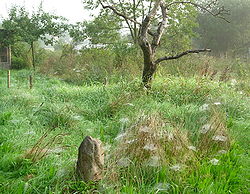 In former times in Europe, 'Indian summer' was called 'Saint Martin's Summer', referring to St. Martin's day, November 11, when it was supposed to end.

The phrase 'Saint Martin's Summer' is still widely used in France, where Saint Martin of Tours died in Candes sur Loire, now Candes-Saint-Martin, on November 8, 397 AD. His corpse was claimed by people of both Poitou and Touraine provinces. The latter pilfered him and brought him on a boat by the river Loire to Tours where he was and still is buried. Legend has it that the river banks flowered as his corpse went by from Candes to Tours.

In Italy, St Martin's summer (Estate di San Martino) was expected and celebrated as a rural tradition with ancient origins, and is marked by a festival throughout the peninsula on November 11. By the ancient agriculture systems of rural tenancy and sharecropping the yearly rental of the lands traditionally ended just on November 11, right at the end of the harvesting season, but still before winter. So November 11 is still considered a "moving day" because on that day farmers used to move from land to land. In Spain, an Indian summer is called Veranillo de San Miguel or Veranillo de San Martín, depending when it occurs, St Michael's day (September 29) or St Martin's (November 11). It can also be called Veranillo del Membrillo (little summer of the quince). In Galicia (northern Spain), it is called Veraninho de San Martinho, and in Portugal "Verão de São Martinho," both of which mean St. Martin's summer. In both, it is celebrated in rural areas with Magostos (Magusto in Portuguese, from Magnus Ustus, Big Fire), a celebration in which bonfires, roasted chestnuts and wine have an important role. Also in the eastern part of Spain, the Catalans have their 'Estiuet de Sant Martí', a celebration of Celtic origins. In British English "St. Martin's Summer" was the most widely used term until the American phrase became better known in the 20th century. In the United Kingdom, the term 'Indian summer' is used loosely for a period of unseasonable warmth and sunshine in late September, October or November. Indian summers in Britain occurred in 1985 and 2011.

In Bulgaria, the phenomenon is sometimes called "Gypsy Summer" (Bulgarian: циганско лято, tsigansko lyato) and in some places "Gypsy Christmas" and refers to unseasonably warm weather in late fall, or a warm spell in between cold periods.

In Serbia it is called Miholjsko leto (Serbian: Михољско лето) by the name of the orthodox saint from the 6th century Kiriak Otshelnik (Serbian: Свети Киријак Отшелник) known as well as Saint Miholj who is celebrated each year on the same day named by him as Miholjdan – the 12th October. The warm period usually surrounds this date.

In Sweden it is called "brittsommar", which is derived from Birgitta and Britta, who have their name day in the Swedish calendar on October 7, when Britt Mass, an official fall open-air market, was held.

In Germany and Austria, it is called "Altweibersommer", or if referring to mild sunny weather during October in particular, simply "Goldener Oktober" ("Golden October").

In Hungary, it's "vénasszonyok nyara" (Old Ladies' Summer or Crone's Summer) because the many white spiders seen at this time of the year have been associated with the norns of Norse folklore or medieval witches.

In Flanders (Belgium) it is also called "Oudewijvenzomer" (Old Ladies' Summer) or "Trezekeszomer" ("St-Theresa's Summer – St-Theresa's Day being on 15 October).

In the Netherlands it is sometimes called "oudewijvenzomer" or "sint-michielszomer" ("St. Michael's Summer"), although the term "nazomer" ("late summer") is used more.

In Welsh, it is known as "Haf Bach Mihangel" or (St.) Michael's Little Summer – St. Michael's Day being on 29 September.

An alternative to St Martin's summer was "Saint Luke's summer", as the saint's feast day is October 18. Another alternative was "All-hallown summer", as All Hallows' (= All Saints') Day is November 1, hence Halloween is October 31; the expression is used in Shakespeare's King Henry IV, Part 1, Act 1 Scene 2.

In Lithuania this time is called "Bobų vasara", which translates to "summer of old ladies".

In Latvia this period is called "Atvasara", which translates to "re-summer" or "return/repeat/flashback of summer".

Similar usages in other countries

In China, this period is called "qiū lǎohǔ" (秋老虎), which literally means 'a tiger in autumn'. In Chinese, it signifies the revival of often fierce, summer-like heat that persists well past the Beginning of Autumn (the 13th seasonal division point according to the Chinese calendar, usually falling on the 7th or the 8th of August). This hot weather may persist until well into October or November in the southern regions.

In the south of Brazil, a similar phenomenon is called "veranico de maio", a regional term roughly meaning "little summer of May", representing a short span of hot weather that occurs mid-autumn.

Indian Summer can occur in Australia during the months of April and May, where in Sydney weeklong stretches of above average, warm temperatures can occur.