Chongzuo is located in southwestern Guangxi province. It borders Nanning in the east, Baise in the north, Fangchenggang in the south and Lạng Sơn, Vietnam in the west. The Zuo or Left River and the You or Right River have their confluence in Chongzuo after which the river becomes the Yong River. Chongzuo is mountainous and hilly with numerous karst formations similar to Guilin and northern Vietnam’s Ha Long Bay. Its area is 17,345 km², 7,190 km² of which is forested. 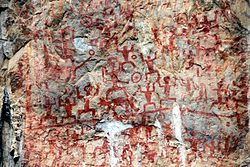 Chongzuo is one of the earliest centers of Zhuang culture. Important sites dating back to the stone age have been found here. The Rock Paintings of Hua Mountain along the Ming River at Huashan date back 1800 to 2500 year and are one of the largest groups of pictographs in China and in the world. On several cliff faces are hundreds of large red pictographs depicting a large battle. The red pigment is still bright and vivid and individual figures, weapons, and animals are easy to distinguish. The cliffs, part of the sacred Frog Mountain, were important site to the early Zhuang.

In 214 BC, during the Qin dynasty, Chongzuo was part of the Xiang (象郡) commandry. Chinese general Feng Zicai (馮子才) beat back a French attack here at the Battle of Bang Bo in 1885. Sun Yat-sen (孫中山) fired the first cannon shot of the anti-Qing revolution in Chongzuo in 1907. In the 1930s, after fomenting rebellion in other parts of Guangxi, Deng Xiaoping (鄧小平) helped organize the peasants and workers here during the Longzhou rebellion and eventually formed the Red Army's 8th Army. Later, in 1979, the Chinese army invaded Vietnam from here.

Chongzuo's population is 2,260,000. 88% of the people belong to the Zhuang ethnic group. The rest include Han, Yao, and other ethnic groups.

Chongzuo has amazing biodiversity with more than 4000 species of plants and more than 450 kinds of animals. There are more than 30 rare and protected animals including white headed and Indo-Chinese black langurs, crested striped hornbills, pangolins, and clouded leopards. 1/4 of China’s wild animal species can be found in Chongzuo.

View from China in dry season. Banyue fall is on the left. Detian is on the right

Chongzuo is famous for its beautiful natural scenery. The most famous attraction is Detian Waterfall in Daxing County along the border with Vietnam. It is the second largest waterfall along a national border after Niagara Falls and was one of the crossing points for China’s army during the brief Sino-Vietnamese War. Nearby there is the Tongling Gorge accessible only through a cavern from an adjoining gorge. Rediscovered only recently, it has many species of endemic plants, found only in the gorge, and used to be used as a hideout by local bandits whose treasure is occasionally still found in the cliff-side caves. West of Chongzuo city, there are several forest and animal preserves, some with minor tourist facilities.