Academic fencing (German akademisches Fechten) or Mensur is the traditional kind of fencing practiced by some student corporations (Studentenverbindungen) in Germany, Austria, Switzerland, and to a minor extent in Kosovo, Estonia, Latvia, Poland and Flanders. 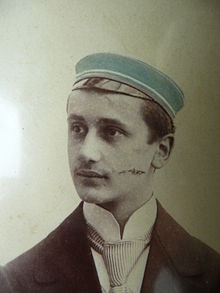 An 1896 picture of de:Adolf Hoffmann-Heyden(German), a German Corpsstudent, showing an extensive fresh fencing scar and some minor old ones.

Mensur fencing with Korbschläger in Tübingen in 1831

Modern academic fencing, the "mensur," is neither a duel nor a sport. It is a traditional way of training and educating character and personality; thus, in a mensur bout, there is neither winner nor loser. In comparison to sport fencing, the participants stand their ground at a fixed distance. At the beginning of the tradition, duelers wore only their normal clothing (as duels sometimes would arise spontaneously) or light-cloth armor on arm, torso, and throat. In recent years, fencers are protected by chain mail or padding for body, fencing arm, fencing hand (gauntlet) and the throat, completed by steel goggles with a nose guard. They fence at arm's length and stand more or less in one place, while attempting to hit the unprotected areas of their opponent's face and head. Flinching or dodging is not allowed, the goal being less to avoid injury than to endure it stoically. Two physicians are present (one for each opponent) to attend to injuries and stop the fight if necessary.

The participants, or Paukanten, use specially-developed swords. The so-called Mensurschläger (or simply Schläger), exist in two versions. The most common weapon is the "Korbschläger" with a basket-type guard. In some universities in the eastern part of Germany, the so-called "Glockenschläger" is in use which is equipped with a bell-shaped guard. These universities are Leipzig, Berlin, Greifswald, Dresden, Tharandt (in the Forestry College which is now part of Technische Universität Dresden), Halle on the Saale, Frankfurt-an-der-Oder, and Freiberg. In Jena both "Korbschläger" and "Glockenschläger" are used. Studentenverbindungen from some western cities use "Glockenschläger" because their tradition had its origin in one of the eastern universities but moved to Western Germany after World War II.

The scar resulting from a hit is called a "smite" (German Schmiss), and was seen as a badge of honour, especially in the second half of the 19th century and the first half of the 20th. Today it is not easy for an outsider to identify Mensur scars due to better medical treatment. Also the number of mandatory Mensuren were reduced in the second half of the 20th century. Most Mensur scars are located on the left temple of the forehead. Scars on the cheek and chin are rather uncommon today and sometimes due to accidents. 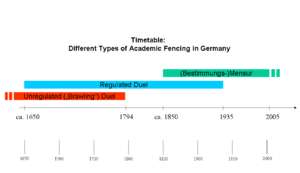 Timetable of academic fencing in Germany 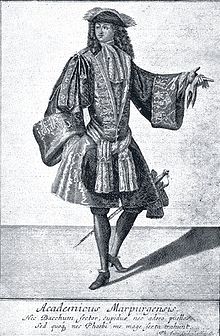 Marburg student of about 1700 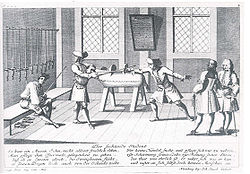 Fencing lesson at the university fencing school in Altdorf, 1725 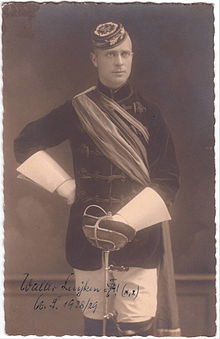 Typical smallsword of the 1740s.

Starting in Spain at the end of the 15th century, the dueling sword (rapier) became a regular part of the attire of noblemen throughout Europe. In the Holy Roman Empire this became usual among students as well. Brawling and fighting was a regular occupation of students in the German speaking areas during the early modern period. In line with developments in the aristocracy and the military, regulated duels were introduced to the academic environment as well. The basis of this was the conviction that being a student meant being something different from the rest of the population. Students wore special clothes, developed special kinds of festivities, sang student songs, and fought duels, sometimes spontaneously (so called rencontre, French "meeting" or "combat"), sometimes according to strict regulations called comment (French "how"). The weapons used were the same as those employed in civilian dueling, being at first the rapier and later the smallsword (court sword, dress sword, French L'épée de cour, German Kostümdegen, Galanteriedegen) which was seen as part of the dress and always at hand as a side arm.

Student life was quite unsafe in these years, especially in the 16th and 17th century during the Reformation wars and the Thirty Year War (1618–1648) when a major part of the German population was killed. Public life was brutal and students killing each other in the street was not uncommon.

A major step towards civilization was the introduction of the "regulated" duel of which the first recordings exist from the 17th century. The fight was not decided on the spot but the time and location were appointed and negotiations were done by officials. A so-called Kartellträger did the arrangements and a second represented the interests of the fighter during the duel and could even give physical protection from illegal actions. A kind of referee was present to make decisions and eventually the practice of having an attending doctor became normal so as to give medical help in case of an injury.

At the end of the 18th century (after the French Revolution), wearing of weapons in everyday life fell out of fashion and was more and more forbidden, even for students. This certainly reduced the number of spontaneous duels dramatically. The regulated duel remained in use although it continued to be forbidden.

The foil was invented in France as a training weapon in the middle of the 18th century in order to practice fast and elegant thrust fencing. Fencers blunted the point by wrapping a foil around the blade or fastening a knob on the point ("blossom", French fleuret). In addition to practising, some fencers took away the protection and used the sharp foil for duels. German students took up that practice and developed the Pariser ("Parisian") thrusting small sword for the Stoßmensur ("thrusting mensur"). After the dress sword was abolished, the Pariser became the only weapon for academic thrust fencing in Germany.

Since fencing on thrust with a sharp point is quite dangerous, many students died from their lungs being pierced (Lungenfuchser) which made breathing difficult or impossible. However, the counter movement had already started in Göttingen in the 1760s. Here the Göttinger Hieber was invented, the predecessor of the modern Korbschläger, a new weapon for cut fencing. In the following years, the Glockenschläger was invented in east German universities for cut fencing as well.

Thrust fencing (using Pariser) and cut fencing using Korbschläger or Glockenschläger) existed in parallel in Germany during the first decades of the 19th century - with local preferences. So thrust fencing was especially popular in Jena, Erlangen, Würzburg and Ingolstadt/Landshut, two towns where the predecessors of Munich university were located. The last thrust Mensur is recorded to have taken place in Würzburg in 1860.

Until the first half of the 19th century all types of academic fencing can be seen as duels, since all fencing with sharp weapons was about honour. No combat with sharp blades took place without a formal insult. Compared to pistol duels, these events were quite harmless. The fight was regularly ended when an injury occurred which caused a wound with a length of at least one inch and with at least one drop of blood coming out from it. It was not uncommon that students fought approximately 10 to 30 duels of that kind during their university years. The German student Fritz Bacmeister is regarded to be the record holder of the 19th century due to his estimated 100 mensur bouts fought in Göttingen, Jena and Würzburg between 1860 and 1866.[1] In the 20th and 21st century it's Alexander Kliesch (Landsmannschaft Brandenburg Berlin) with more than 60.

For duels with non-students, e.g. military officers, the academic sabre became usual, apparently derived from the military sabre. It was a heavy weapon with a curved blade and a hilt similar to the Korbschläger.

During the first half of the 19th century and some of the 18th century, students believed that the character of a person could easily be judged by watching him fight with sharp blades under strict regulations. Academic fencing was more and more seen as a kind of personality training by showing countenance and fairness even in dangerous situations. Student corporations demanded that their members fight at least one duel with sharp blades during their university time. The problem was that some peaceful students had nobody to offend them. The solution was a kind of formal insult which did not actually infringe honour but was just seen as a challenge for fencing. The standard wording was dummer Junge (German for "silly boy").

In the long term, this solution was unsatisfying. It was around 1850 that the Bestimmungsmensur (German bestimmen means "ascertain", "define" or "determine") was developed and introduced throughout Germany. This meant that the opponents of a Mensur were determined by the fencing official of their corporations. These officials were regularly vice-chairmen (Consenior) and responsible for arranging Mensur bouts in cooperation with their colleagues from other corporations. Their objective was to find opponents of equal physical and fencing capabilities in order to make the event challenging for both participants. That is the way it is still done today. That is the concept of the Mensur in the modern sense of the word.

Before the Communist revolution in Russia and before World War II, academic fencing was known in most countries of Eastern Europe as well. 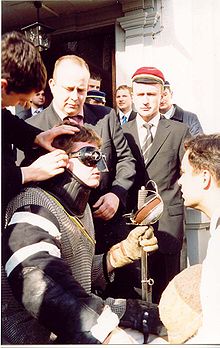 Preparations for a mensur (Warsaw in Poland, 2004) - K! Sarmatia, www.sarmatia.pl

In Three Men on the Bummel (1900), Jerome K. Jerome devoted a chapter to German student life, and describes the "The German Mensur" in detail. While much of the book has a tone of admiration for the German people, he expressed extreme disapproval for this tradition.

George MacDonald Fraser's Royal Flash (1970), the protagonist Flashman is scarred with a schläger as part of his disguise as a Danish prince.

Mensur scars are repeatedly noted and described as a sign of beauty and manliness by German characters in Katherine Anne Porter's novel Ship of Fools.

Mensur scars are mentioned in passing in Robert Heinlein's Starship Troopers when two German recruits are asked at the beginning of boot camp where they got their scars from. The drill sergeant even uses the term "Korpsbruder" (as spelled in modern German). E. C. Gordon, the hero of Heinlein's Glory Road, mentions his desire for a degree from Heidelberg and the dueling scars to go with it.