A matryoshka doll is a Russian nesting doll (Russian: Матрёшка) which is a set of wooden dolls of decreasing size placed one inside the other. The first Russian nested doll set was carved in 1890 by Vasily Zvyozdochkin from a design by Sergey Malyutin, who was a folk crafts painter at Abramtsevo. Traditionally the outer layer is a woman, dressed in a sarafan, a long and shapeless traditional Russian peasant jumper dress. The figures inside may be of either gender; the smallest, innermost doll is typically a baby lathed from a single piece of wood. Much of the artistry is in the painting of each doll, which can be very elaborate. The dolls often follow a theme, aside from the typical traditional peasant girls, the themes vary, from fairy tale characters to Soviet leaders. 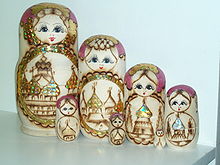 A set of matryoshkas consists of a wooden figure which separates, top from bottom, to reveal a smaller figure of the same sort inside, which has, in turn, another figure inside of it, and so on. The number of nested figures is traditionally at least five, but can be much more, up to several dozen with sufficiently fine craftsmanship. Modern dolls often yield an odd number of figures but this is not an absolute rule; the original Zvyozdochkin set, for instance, had an even number. The form is approximately cylindrical, with a rounded top for the head, tapering toward the bottom, with little or no protruding features; the dolls have no hands (except those that are painted). Traditionally the outer layer is a woman, dressed in a sarafan. The figures inside may be of either gender; the smallest, innermost doll is typically a baby lathed from a single small piece of wood (and hence non-opening). The artistry is in the painting of each doll, which can be extremely elaborate. 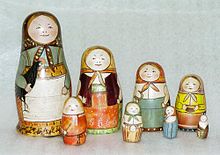 The original matryoshka by Zvyozdochkin and Malyutin, 1890

The first Russian nested doll set was carved in 1890 by Vasily Zvyozdochkin from a design by Sergey Malyutin, who was a folk crafts painter in the Abramtsevo estate of the Russian industrialist and patron of arts Savva Mamontov.[2][3] The doll set was painted by Malyutin. Malyutin's doll set consisted of eight dolls—the outermost was a girl holding a rooster wearing a traditional dress. The inner dolls were girls and a boy, and the innermost a baby.[2]

Zvyozdochkin and Malyutin were inspired by a doll from Honshu, the main island of Japan. Sources differ in descriptions of the doll, describing it as either a round, hollow daruma doll or a fukuruma nesting doll portraying portly bald old Buddhist monk.[2][3][4]

In 1900, Savva Mamontov's wife presented the dolls at the World Exhibition in Paris, and the toy earned a bronze medal. Soon after, matryoshka dolls were being made in several places in Russia.

Matryoshka dolls are often designed to follow a particular theme, for instance peasant girls in traditional dress, but the theme can be anything, from fairy tale characters to Soviet leaders.

During Perestroika, the leaders of the Soviet Union became a common theme depicted on matryoshkas. Starting with the largest, Mikhail Gorbachev, then Leonid Brezhnev (Yuri Andropov and Konstantin Chernenko almost never appear due to the short length of their respective terms), then Nikita Khrushchev, Josef Stalin and finally the smallest, Vladimir Lenin. Newer versions start with Dmitry Medvedev and then follow with Vladimir Putin, Boris Yeltsin, Mikhail Gorbachev, Joseph Stalin and then Vladimir Lenin.

Set of dolls in order of size

Matryoshkas are also used metaphorically, as a design paradigm, known as the "matryoshka principle" or "nested doll principle". It denotes a recognizable relationship of "object-within-similar-object" that appears in the design of many other natural and man-made objects. Examples include the Matrioshka brain and the Matroska media-container format. The "matryoshka principle" is also an example of Mise-en-abyme. Compare Fractal.

The onion metaphor is of similar character. If the outer layer is peeled off an onion, a similar onion exists within. This structure is employed by designers in applications such as the layering of clothes or the design of tables, where a smaller table sits within a larger table and a yet smaller one within that.

The dolls are constructed from one block of wood, which is essential to their manufacture.[6]

A block of wood is cut in half. Then, a piece of wood is taken out of the top and bottom pieces. This continues until there is very little wood left. The wood is carved into an oval shape. The matching pieces are put together. The pieces are painted and nested inside one another.