Main article: Postage stamps and postal history of the People's Republic of China

The current postal service in the PRC was established in 1949. It replaced the Chunghwa Post in the Universal Postal Union in 1972. The postal service in China can be dated back to the Shang Dynasty. It was formerly administered by the Ministry of Posts and Telecommunications.

China Post is organized along the following organizational structure.[3] 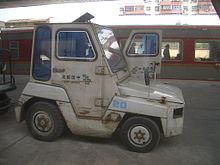 A postal car towing trailers with mail, at a train station