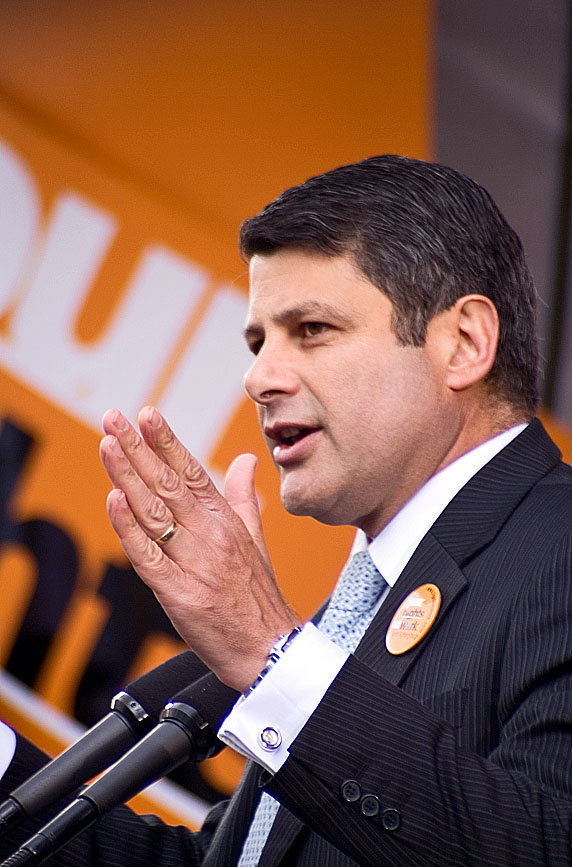 Stephen Philip Bracks (better known as Steve Bracks) (born , ) is a former n politician, and the 44th , holding the position for eight years, from 1999 to 2007. He was born in Ballarat, where his family owns a fashion business. He was educated at St Patrick's College and (now the ), where he graduated in business studies and education. Bracks is a keen follower of , supporting the . His wife, Terry, is the number one female ticket holder for the .

Bracks announced his resignation as Premier on , , and formally resigned from the position on . [ [http://www.worldnewsaustralia.com.au/region.php?id=138726&region=7 Bracks resigns as premier] , "World News Australia" (SBS), . ]

From 1976 to 1981 Bracks was a school commerce teacher. During the 1980s he worked in local government in Ballarat and then as Executive Director of the Ballarat Education Centre. While in these positions he twice (1985 and 1988) contested the seat of Ballarat North in the for the .

In 1989 Bracks was appointed statewide manager of Victorian state government employment programs, under the Labor government of John Cain. He then became an advisor to Cain, and to Cain's successor as Premier, . Here he was able to witness from the inside the collapse of the Labor government following the economic and budgetary crisis which began in 1988. This experience gave Bracks a very conservative and cautious view of economic management in government. [ [http://www.smh.com.au/news/national/jeff-and-teds-misadventure/2006/11/17/1163266787639.html?page=fullpage#contentSwap1 Jeff and Ted's misadventure] , "", .]

Following the defeat of the Kirner government by the Liberal leader in late 1992, Bracks became Executive Director of the Victorian Printing Industry Training Board. He quit this post in 1994 when Kirner resigned from Parliament and Bracks was elected for Kirner's seat of Williamstown in the western suburbs of Melbourne, where he now lives with his wife Terry and their three children.

Bracks was immediately elected to Labor's front bench, as Shadow Minister for Employment, Industrial Relations and Tourism. In 1996, after Labor under was again defeated, he became Shadow Treasurer. In March 1999, when it became apparent that Labor was headed for another defeat under Brumby's leadership, Brumby resigned and Bracks was elected Opposition Leader.

Political observers were almost unanimous that Bracks had no chance of defeating Liberal premier at the November 1999 election: polls gave Kennett a 60% popularity rating. Bracks and his senior colleagues (particularly Brumby, who comes from Bendigo) campaigned heavily in regional areas, accusing Kennett of ignoring regional communities. In response, voters in regional areas deserted the Kennett government and Labor increased their seats from 29 to 42, with the Liberals and their National Party allies retaining 43, and three falling to rural independents. With no party having a clear majority, the independents agreed to support a minority Labor government.

Former leader Brumby, appointed Treasurer, was regarded as a major part of the government's success. He and the Deputy Premier, , and the Attorney-General, , were regarded as the key ministers in the Bracks government.

Following a pre-1999 election commitment to consider the feasibility of introducing fast rail services to regional centres, in 2000 the government approved funding to upgrade rail lines to provide fast rail passenger services between Melbourne and Ballarat, Bendigo, Geelong and Traralgon. However, the Victorian auditor general noted that in spite of $750 million spent, "We found that the delivery of more frequent fast rail services in the Geelong, Ballarat, and Bendigo corridors by the agreed dates was not achieved. In total, the journey time outcomes will be more modest than we would have expected with only a minority of travellers likely to benefit from significant journey time improvements. These outcomes occur because giving some passengers full express services means bypassing often large numbers of passengers at intermediate stations along the corridors." [ [http://www.audit.vic.gov.au/reports_mp_psa/psa1601.html Results of special audits and other investigations] , Victorian Auditor-General's Office, August 2006.]

On , Steve Bracks released a document outlining his government's intent to introduce the . "

The major criticism of Bracks's first government was that their insistence on consultation stood in the way of effective, proactive government. Bracks, according to critics, achieved little, and lost the excitement of constant change that was characteristic of the Kennett years. The talents of some of the more junior ministers in the government were also questioned. Nevertheless Bracks got through his first term without major mishaps, and his popularity undiminished.

Labor won the 2002 election in a landslide, taking 62 seats out of 88 in the Legislative Assembly, and for the first time in Victorian history, a slim but clear majority in the Legislative Council as well. While this was the greatest victory Labor had ever had in a Victorian state election, it brought with it considerable risks. With majorities in both houses Bracks could no longer cite his weak parliamentary position as an excuse for inaction. The trade unions, who traditionally feel a strong sense of ownership of Labor state governments, began to be more assertive and inflexible during 2003 and 2004.Fact|date=March 2008

On , Bracks in conjunction with then counterpart , [http://www.dpc.vic.gov.au/domino/Web_Notes/MediaRelArc02.nsf/0/e851e24b91a0fb52ca256c23007e352d!OpenDocument&Click= opened] the Mowamba between and , to divert 38 gigalitres of water a year from to the Snowy and Murray rivers. The ten year plan cost $300millionAUD with Victoria and NSW splitting the costs. has stated that within 50 years there will be 20 percent less water going into Victorian reservoirs. [http://www.theage.com.au/news/editorial/were-still-a-nation-of-wallies-with-water/2006/08/04/1154198330444.html?page=2]

In May 2003 Bracks broke an election promise and announced that the proposed Scoresby Freeway in Melbourne's eastern suburbs would be a tollway rather than a freeway, as promised at the 2002 elections. As well as risking a loss of support in marginal seats in eastern Melbourne, this decision brought about a strong response from the Howard Federal government, which cut off federal funding for the project on the grounds that the Bracks government had reneged on the terms of the federal-state funding agreement. The decision seems to have been on the recommendation of Brumby, who was concerned with the state's budgetary position. Also opposing the decision was the Federal Labor Opposition, which feared anti-Labor reaction at the 2004 Federal election. The then Opposition Leader described a meeting with Bracks and Federal shadow ministers, writing:

This backflip, whilst seen by many as an opportunity for the Liberals to make ground, saw the then leader of the Liberals, , adopt a much-criticised policy of half tolls, which was later overturned by his successor, .

In 2005, Bracks announced that Victorian cattlemen would be banned from using Victoria's "High Plains" to graze cattle, ending a 170 year tradition. Stockmen had been fearing this decision since 1984, when a Labor government excised land to create the . 300 cattlemen rode horses down Bourke street in protest. Victorian National Party leader was quoted as saying that Bracks had [http://www.tomburlinson.homestead.com/savesnowycattle.html "killed the man from Snowy River"] , a reference to the poem "The Man from Snowy River."

Bracks's second government achieved one of Victorian Labor's longest-held goals with a complete reform of the state's system for electing its upper house. It saw the introduction of , with eight five-member regions replacing the current single-member constituencies. This system increases the opportunity for minor parties such as the Greens and DLP to win seats in the Legislative Council, giving them a greater chance of holding the balance of power. Illustrating the historic importance Labor assigns to the changes, in a speech to a conference celebrating the 150th anniversary of the , Bracks said it was "another victory for the aspirations of Eureka", [ [http://www.premier.vic.gov.au/newsroom/Speech_item_archive.asp?id=80 Eureka 150 Democracy Conference] - Full speech by Steve Bracks, November 26, 2004] and has described the changes as "his proudest achievement". [ [http://www.theage.com.au/news/opinion/will-bracks-live-to-regret-this-reform/2005/07/14/1120934356963.html Will Bracks live to regret this reform?] - "The Age", July 15, 2005]

The staging of the , generally viewed as a success (albeit an expensive one) was viewed as a plus for Bracks and the government. With times reasonably good, a perception arguably reinforced by an extensive government advertising campaign selling the virtues of Victoria to Victorians, [ [http://www.theage.com.au/news/national/state-ads-come-with-healthy-1m-price-tag/2006/04/22/1145344320287.html State ads come with healthy price tag] - "The Age", April 23 2006] polls indicated little interest in change, although towards the end of the election campaign polling indicated that the Liberals under Baillieu were closing the gap.

The election campaign was a relatively low-key affair, with the Government and Bracks largely running on their record, as well as their plans to tackle infrastructure issues in their third term. Bracks' image loomed large in Labor's election advertising. Liberal attacks concentrated on the slow process of infrastructure development under Bracks (notably on water supply issues relating to the severe drought affecting Victoria in the election leadup), and new Liberal leader promised to start construction on a range of new infrastructure initiatives, including a new dam on the and a desalination plant. Labor's broken election promise on Eastlink was also expected to be a factor in some seats in the eastern suburbs of Melbourne.

On , Steve Bracks won his third election, comfortably defeating Baillieu to secure a third term, with a slightly reduced majority in the Lower House. This marked only the second time that the Victorian Labor Party had won a third term in office. His third term Cabinet was sworn in on with Bracks also holding the portfolio of Veterans' Affairs and Multicultural Affairs.

Bracks announced his resignation as Premier on , saying this was in order to spend more time with his family. [cite news|url=http://www.theage.com.au/news/national/bracks-resigns-as-premier/2007/07/27/1185339209648.html|title=Steve Bracks resigns as Premier|date=2007-07-27|accessdate=2007-07-27|publisher=The Age] He stepped down on . According to the ABC Bracks had been under political and personal pressure in the weeks before his resignation. Alone among State Premiers he had refused to agree to the Federal Government's $10 billion water conservation plan, [cite news|url=http://www.theage.com.au/news/national/dead-in-the-water/2007/05/23/1179601445732.html|title=Bracks pulls plug on Murray-Darling plan|date=2007-05-23|accessdate=2007-07-27|publisher=The Age] and his son had been involved in an accident involving a charge of drunk driving. [cite news|url=http://www.theage.com.au/news/national/premiers-son-on-crash-charges/2007/07/13/1183833733525.html|title=Son behaved 'like an idiot'|date=2007-07-13|accessdate=2007-07-27|publisher=The Age] Bracks told a media conference he could no longer give a 100 per cent commitment to politics:

Bracks' deputy John Thwaites announced his resignation on the same day. News of the resignations caused surprise to the general community as well as to politicians. It was revealed that then Federal Labor Leader , was informed only minutes before the announcement, and tried to talk Bracks out of his decision. Bracks' Treasurer was elected unopposed by the Victorian Labor as Bracks' successor, while Attorney-General was elected Deputy Premier.

In August 2007, following his resignation as Premier, Bracks announced he would provide a short-term advising role in working alongside the newly elected Prime Minister .

In addition to his role advising Gusmao, Bracks also joined several company advisory boards: , insurance firm , the AIMS Financial Group and the NAB. The KPMG appointment was controversial, as the Victorian government had awarded the firm over 100 contracts during Bracks' time as Premier. [ [http://www.theage.com.au/news/national/brumby-backs-bracks-job/2007/10/04/1191091235655.html Brumby stands by Bracks' new job] , "", .] On 14 February 2008, the Federal Labor Government appointed Bracks to head an inquiry into the ongoing viability of the Australian car industry. [ [http://www.abc.net.au/news/stories/2008/02/14/2162385.htm Bracks 'not qualified' to lead car industry review] , "", .]