Marriage in England and Wales

Marriage in England and Wales 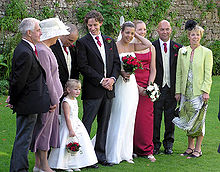 Lining up for a traditional wedding photograph

Marriage in England and Wales is between a man and a woman. Civil partnerships became available to same-sex couples in December 2005 and grant rights and responsibilities identical to civil marriage. Subject to a Consultation process, Same-Sex Civil Marriage will become legal in time for the 2015 general election.[1]

There are residency conditions that have to be met before people can be married. If one of the people wanting to marry is subject to immigration control, notice of marriage can only be done at a designated register office, which both parties must attend together. The marriageable age is 16 with the consent of parents but 18 otherwise. Marriage must be between two people of opposite-sex neither of whom are in a Civil Partnership or separate marriage (foreign divorces are generally recognised, but existing foreign polygamous marriages prevent a marriage in the UK as this would be treated as bigamy). 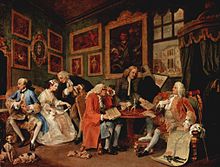 Marriages can either be conducted by "authorised celebrants" (usually, but not always, a minister of religion) or by an "authorised Registrar". Civil marriages may not take place in religious venues, but since the Marriage Act 1994 may take place in other licensed venues. The marriage register is signed by the couple, the celebrant and two witnesses.

Priests of the Church of England and the Church in Wales are legally required to marry people, providing one of them is from the local parish, regardless of whether the couple are practising. Special permission may be granted for out-of-parish weddings.

The Marriage Duty Acts of 1694 and 1695 required that banns or marriage licences must be obtained. The 1753 Act also laid down rules for where marriages were allowed to take place, whom you were and were not allowed to marry, required at least two witnesses to be present at the marriage ceremony and set a minimum marriageable age. This led to the practice of couples who could not meet the conditions in England and Wales eloping to Scotland.

Parental permission is required for either party to a marriage who is less than 18 years old, but as long as they are at least 16 years old a lack of it does not necessarily invalidate the marriage.

Legal common-law marriage was for practical purposes abolished under the Marriage Act, 1753. The term "common law marriage" is frequently used to describe mere cohabitation but such a "marriage" is extremely rarely recognised in law; cohabitation does not generally confer any of the rights or obligations associated with marriage on the parties. It survives only in a few highly exceptional circumstances, where people who want to marry are unable to do so any other way and can simply declare that they are taking each other as husband and wife in front of witnesses. British civilians interned by the Japanese during World War II who did so were held to be legally married.

Main article: Legal consequences of marriage in the United Kingdom

Upon death of one's spouse, bequests to the other spouse do not incur inheritance tax. Intestate property by default will go to the spouse. Also, there is partial inheritance of pensions.

In courts, one spouse may not be compelled to testify against the other. Non-British spouses of British citizens may obtain residence permits.

Spouses are considered to have a duty of care towards each other, and certain social security benefits are calculated differently from those for single people.

Foreign citizens wishing to marry in the UK

From 1 February 2005, visitors who wish to be married in the UK that are a citizen of a country that is not a member of the European Economic Area (EEA), must apply for a visa before they travel. Without the visa the registrar will not be able to accept the notice of marriage and will not be able to perform the marriage ceremony.

Until May 2011, persons already in the UK and a citizen of a country that was not a member of the EEA, needed the approval of the Home Secretary to be married. This was provided in the form of a certificate of approval. That programme was discontinued on 9 May 2011.

Marriages of members of the royal family are regulated by the Royal Marriages Act of 1772, which made it illegal for any member of the British royal family (defined as all descendants of King George II, excluding descendants of princesses who marry into "foreign families") under the age of 25 to marry without the consent of the ruling monarch. Any member of the Royal Family over the age of 25 who has been refused the sovereign's consent may marry one year after giving notice to the Privy Council of their intention to so marry, unless Parliament passes an act against the marriage in the interim. In 2005, the Queen consented formally to the wedding of Charles, Prince of Wales and Camilla Parker Bowles.

The royal family was specifically excluded from the Marriage Act 1836 which instituted civil marriages in England. However, Prince Charles's civil marriage raised questions. Lord Falconer of Thoroton told the House of Lords that the 1836 Act had been repealed by the Marriage Act 1949 which had different wording, and that the British Government were satisfied that it was lawful for the couple to marry by a civil ceremony in accordance with Part III of the 1949 Act, and the Registrar General Len Cook determined that a civil marriage would in fact be valid. Any doubt as to the interpretation of the Marriage Act 1949 was put to rest by the Human Rights Act 1998, which requires that legislation is interpreted in conformity with convention rights wherever possible (including the right to marry, without discrimination).

Divorce is allowed on various grounds. The Matrimonial Causes Act 1973 gives the following grounds for divorce:

Civil re-marriage is allowed. Religions and denominations differ on whether they permit religious re-marriage.