The rolling stock of the Washington Metro system consists of 1126[1] 75-foot (23 m) cars, delivered in six shipments. All rail cars in the Metrorail system operate in married pairs (consecutively numbered even-odd), with systems shared across the pair. The system rail gauge is a modified standard gauge 4 feet 8¼ inches (1429 mm), ¼ (6 mm) inch closer than standard gauge. The platform height is said to be 38½ inches (978 mm) above top of rail (ATR) and rolling stock floor height is also 38½″ ± ¾″ ATR for level entry. Washington’s Metrorail floors and platforms are lower than most East Coast mass transit systems, such as New York, Boston, and Philadelphia.

Metro currently operates 850 cars during rush hours. 814 cars are in active service while the remaining 36 cars compose gap trains to serve as backup should one of the mainline trains experience problems.[2] 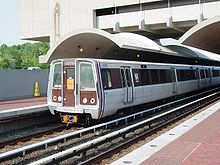 A train of Rohr cars arrives at Cheverly station. 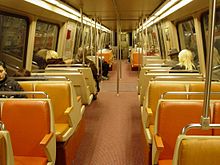 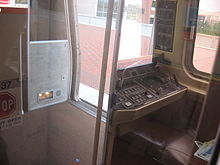 The original order of 300 Metro cars was manufactured by Rohr Industries, with delivery in 1976. These cars are numbered 1000-1299, and were rehabilitated in the mid-1990s by Breda Costruzioni Ferroviarie and WMATA at their Brentwood Shop in northeast Washington, D.C.

The first rehabilitation added exterior loudspeakers in place of one rollsign on each side and also marked the first set of cars to have AC propulsion. The bulkhead on the ends of the cars are also distinguished by windows with aluminum frames that extend the full height of the train, unlike other car classes.

The original interiors have a white grained appearance with 82 orange and brown seats. Future orders would have seating reduced down to 64 or 68, as seats next to the doors would be removed for additional standing areas.

Of these original 300 cars, 290 remain in active revenue service. Car 1028, separated from its mate after it was destroyed during the Federal Triangle derailment in 1982, has become the feeler car that checks system clearances. Four cars, now numbered 8000-8003, serve as the money train to collect the revenue from station fare card machines. 1076 is also permanently out of service after its mate was destroyed in the 2004 accident at Woodley Park station.[3] 1079[1] was the lead car on the second train involved in the June 22, 2009 Washington Metro train collision.[4]

Following the June 22, 2009 collision, Metro implemented a policy of no longer placing 1000-Series rail car pairs at the ends of train consists in order to prevent telescoping in a collision. The new policy places 1000-Series cars in the center of six and eight-car consists, with rail cars of other series in the end positions.[6] 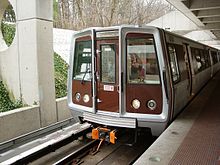 A train of 2000-Series Breda cars at Huntington following rehabilitation. 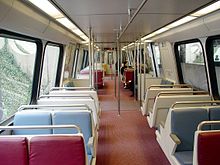 The second order, of 76 cars, was through Breda Costruzioni Ferroviarie (Breda), with delivery in 1982. 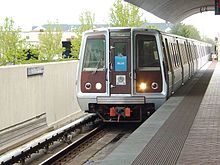 A train of Breda 3000-Series cars prior to rehabilitation arrives at Van Dorn Street station. 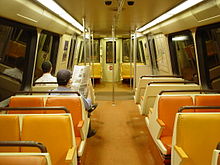 Interior of Breda 3267 prior to rehabilitation. 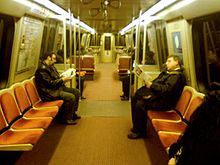 Breda 3283 with modified floor plan. Note the side-facing bench seats in the center, the strap handles along the ceiling, and the lean rests near the end of the car.

The third order consisted of 290 cars, also from Breda, with delivery in 1987.

These cars are numbered 3000-3289 as originally delivered, and were rehabilitated by Alstom in Hornell, New York. As part of this rehabilitation project, they received AC propulsion systems with IGBT technology, replacing the chopper-controlled DC propulsion system. Also included in the rehabilitation is the addition of railcar monitoring systems, advanced ATC/ATS control systems, exterior LED destination signs, interior LED next stop signs, and improved emergency exit signage. The refurbished 3000-series cars also received the red, white, and blue interior found on the 5000-series cars.

On January 6, 1996, a revenue train collided with an out-of-service train, both consisting entirely of Breda 3000-series cars, at the Shady Grove station, fatally injuring the operator of the revenue train. 3252, the lead car of the revenue train, collided with 3191, the car at the inbound end of the out-of-service train.[8] The mates of these two cars, 3253 and 3190 respectively, were later mated together. 3190 reentered revenue service as 3290, and 3253 reentered service as 3291.

Beginning in 2005, a number of 3000-series cars that had not yet undergone rehabilitation were modified as part of a pilot program to study passenger movements to improve the seating arrangement for future rail cars. Sixteen cars received a new seating arrangement that included modified handholds and seat positions, including some longitudinal seating. These cars, as well as other cars being used as control cars in the experiment, received on-board cameras in order for planners to observe passenger movements.[9][10][11][12] 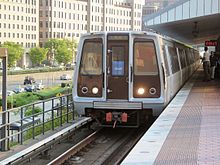 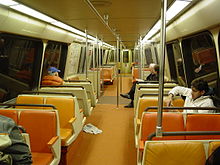 There are some minor differences between these and earlier Breda cars prior to the earlier cars' rehabilitation. First, the bulkhead windows are rounded as compared to squared. The 4000 series cars are also the only cars in the Washington Metro system not to have been originally built with or retrofitted with exterior speakers.

However, they still have the original flip-dot exterior destination signs, chopper-controlled DC propulsion systems, and the original cream, orange, and yellow interiors.

On July 4, 2010, Metro took all 100 4000-series cars out of service to repair the door motors to prevent them from unintentionally opening while the train is in motion, a situation that metro engineers were able to duplicate in a rail yard.[13] On July 20, the cars were returned to service after the repair was completed.[14]

These cars are to be rehabilitated from 2014 based on design specifications to be drafted in 2010. One of the requirements is to make them compatible with the new 7000-series cars.[15] [16] 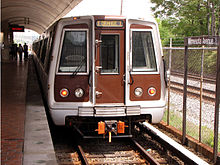 A train of CAF cars at Minnesota Avenue station. 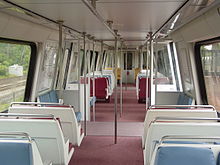 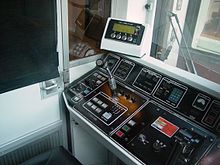 The fifth order consisted of 192 rail cars from a joint venture of Construcciones y Auxiliar de Ferrocarriles (CAF) of Spain and AAI Corporation of Hunt Valley, Maryland. These cars are numbered 5000-5191, with delivery in 2001.

Service introduction of these cars was heavily delayed due to software “glitches” which plagued delivery. At one point, WMATA looked to impose penalties against CAF for the service entry delays.

The contract consisted of CAF engineering and designing the cars and managing the project, while AAI performed assembly. These cars were the first Metrorail cars to originally feature alternating current traction inverters and motors.[citation needed] They were also the first to have LED destination signs on the exterior and LED “next stop” indication signs on the interiors.[citation needed] Along with these improvements, they were also the first to have intercar safety barriers (which have since been added to all other rolling stock) and railcar monitoring systems.[citation needed] The 5000-series cars premiered the red, white, and blue interior. This interior color scheme has since been used on the 2000/3000-series rehabilitation project and the 6000-series cars from Alstom.

Another feature is the return of cast steel trucks, which were previously only used on the Rohr cars.[18] This was done as a cost-saving measure, since fabricated trucks take additional time to manufacture due to the machining required.

The National Transportation Safety Board has begun an investigation about service life of these cars[citation needed] due to recent non-revenue service derailments in Metrorail yards, and the January 7, 2007 derailment of a revenue train on the Green Line at the Mt Vernon Square station.

The planned midlife rehabilitation of the 5000-series cars is to take place in the late 2010s through the early 2020s. Design specifications are to be drafted in 2017, with the first cars rehabbed in 2022. This series of cars will be the third series of cars to have automated station announcements and the stainless steel paint scheme once they have been rehabilitated. The cars will be compatible with the 7000-series once the rehabilitation process is completed.[19] 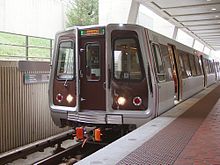 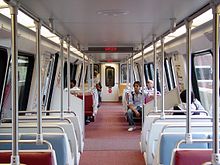 Subsequently, Metro ordered 184 rail cars from Alstom, the same company that rehabilitated the Breda cars. Delivery began in late 2005. These cars are currently being used on Metro trains; the first ones were deployed onto the Green Line. They look similar to the 5000-series cars built by CAF, but feature revised styling.

This is evident with bulkhead doors that have rounded windows compared to squared, and a revised operator window design which eliminates the top horizontal bar. These stylistic features are similar to what is found on the Rohr 1000-series cars. A major change that occurred for the first time since the Breda 2000-series cars is the reduction of seating. The 6000 series cars seats 64 instead of 68.

The interior has been completely redesigned to allow for additional standing room (mostly around the center doors) and easier access to all portions of the car. New to the 6000-series cars is the addition of two interior LED next stop indicators located at the center of the car, which brings the total to four interior displays per car (two facing each direction). Also new is an intercom located next to the center doors; previous railcars only have them at the front and back of each car.

Another new feature is that they are the first series of cars that will be originally manufactured with the flashing brake indicators on the far ends of each car. These are similar to what is used on the Rohr cars and the rehabilitated Bredas, and indicate when the train is in the final stages of stopping. Mechanically, the 6000 series cars features the same cast trucks as the CAF cars, and use the same propulsion systems and advanced cab signaling systems found in the Breda 2000/3000-series rehabilitation from Alstom.

The body shells of the 6000-series were built in Barcelona, Spain, with assembly completed in Hornell, New York.[21][unreliable source?] 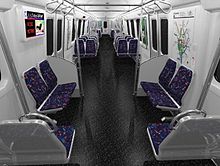 Metro has begun plans to order 428 railcars from Kawasaki called the 7000-series to replace older 1000-series cars and to provide service for the Dulles Corridor Metrorail extension, otherwise known as the Silver Line. In a February 8, 2007 press release, Metro announced that the cars would have a similar appearance to the 6000-Series cars manufactured by Alstom.[27]

However, in a January 2008 press release, Metro indicated that the design for the 7000-Series cars would have a completely different appearance compared to older cars. The exterior would feature a stainless steel body rather than the aluminum of earlier designs,[28] and a new "America's Metro" logo.[29] Inside, seats would be taller and more ergonomically designed, carpeting would be replaced with a hardier floor covering,[28] the grab bars along the ceiling would contain spring-loaded handles,[29] and the cars would contain security cameras, as well as LCD displays to provide train information.[28]

There is also an option to install longitudinal seating instead of the traditional transverse seating found in all previous stock. Such an option would decrease seating capacity, but increase overall car capacity.

The crosses between cars represent couplers, while the dashes represent link bars.[30]

The cars would be so technologically advanced as to render them incompatible with the existing fleet. While board members recognize the seriousness of the decision, Metro general manager John B. Catoe indicated that the board needed to decide "in months" on whether to go ahead with the rail car order, regardless of whether or not the Dulles extension is approved.[31] However, current plans call for the rehabilitated 4000-series cars to be compatible with the 7000-series cars.[citation needed] The new cars will be equipped with on-board diagnostics to help make repairs quickly.[32]

WMATA issued a notice to proceed to Kawasaki on July 27, 2010 after receiving funding from the Federal Transit Administration.[33]

The bidding process began in December 2008. The total contract is to be 648 7000-Series railcars and the rehabilitation of the 100 4000-Series cars. The cars will be equipped with prerecorded station announcements.[34]