The Metro Transit Police Department (MTPD) is the police agency serving the Washington Metropolitan Area Transit Authority. It was created by the WMATA Compact on June 4, 1976.

The Metro Transit Police Department is unique in American law enforcement. It is the only police agency that has local police authority in three different jurisdictions (Maryland, Virginia and the District of Columbia). The department has an authorized strength of 420 sworn officers, 106 security special police, and 24 civilian personnel. New officers complete twenty-three weeks of initial training at the Northern Virginia Criminal Justice Training Academy and then complete fifteen additional weeks of training at the Metro Transit Police Academy.

The Metro Transit Police is accredited by the Commission on Accreditation for Law Enforcement Agencies.

Uniformed and plainclothes Transit Police officers patrol the Metrorail system and Metrobuses on foot and on bicycles, and using motorcycles and marked and unmarked police cars. Transit Police Detectives provide investigative support. Transit Police officers have jurisdiction and arrest powers throughout the 1,500-square-mile (3,900 km2) Metro service area for crimes that occur on Transit Authority facilities,[1] or within 150 feet (46 m) of a Metrobus stop.[2]

Transit Police are actively involved in protecting Metro passengers and infrastructure from terrorist threats. After the September 11, 2001 attacks and the London subway bombings, and periodically since, members of the Metro Transit Police Special Response Team conduct security sweeps of the rail system while armed with special weapons systems, H&K MP5 submachine guns and supported by explosive ordinance detection K-9 teams. Additionally, the department has a dedicated explosive disposal team.

Impact of policing in a transit environment 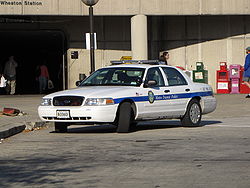 Local ordinances strictly forbid riders from eating or drinking while on a Metrorail train or in a station.[3][4][5][6][7] Officers are required to take police action when they observe any criminal activity, but arrests for these minor violations are rare. One exception was on October 23, 2000, when a 12-year old girl was arrested, searched, and handcuffed for refusing to stop eating french fries while in the Tenleytown-AU Metro station. She was taken to a police juvenile processing area where she was booked, fingerprinted, and detained until her mother arrived to pick her up.[8] At the time of the incident, the Officer had no legal authority to take any formal action against a juvenile other than make an arrest. This policy has since been changed and Transit Police Officers may now issue written warnings to juvenile offenders. Another widely noted case occurred on July 16, 2004, when an EPA employee was entering the Metro Center station. Before passing through the faregates she was told to finish eating before entering the paid area of the station by a Police Officer. Instead, she popped the last bite of a PayDay candy bar into her mouth, continuing to chew the candy bar while in the station. She was subsequently arrested by the Metro Transit Police Officer after refusing to cooperate with the issuance of a citation for the offense.[9]

While sometimes seen as excessive, Metro's zero-tolerance policy when it comes to crime, including eating, drinking, littering, and other forms of disorder, embodies the broken windows philosophy of crime reduction. According to criminal justice author Nancy G. La Vigne, Metro's attempts to reduce crime, combined with how the station environments were designed with crime prevention in mind,[10] has contributed to the fact that Washington Metro is regarded to be among the safest and cleanest subway systems in the United States.[11]

This philosophy also extends to use of station restroom facilities. Metro's long-standing policy restricts use of restrooms to only employees in order to prevent undesirable activity such as graffiti,[11] though station managers could make exceptions at their discretion, such as for customers with small children, the elderly or disabled, etc.[12] In 2003, Metro added a self-cleaning portable restroom for public use at the Huntington station.[12]

In 2003, a publicly posted policy change at each station indicated that, except at the three stations which do not have accessible restrooms (which will only be for use of Transit Authority personnel), passengers who request use of the restrooms will be permitted to do so, subject to the station manager being able to escort them to the restroom. The station manager does not have to wait for them to finish using the restroom, but is permitted to allow them to find their way out of the area where the restroom is located.

Since the establishment of the Metro Transit Police Department, two officers have been killed in the line of duty.[15] Officer Harry Davis, Jr. was shot and killed in Landover, Maryland, while investigating a stolen vehicle parked at a Metro facility near the Landover station on December 20, 1993.[16] Officer Marlon Morales was shot in the District of Columbia by a fare evasion suspect at the U Street Metro station on June 10, 2001. Morales succumbed to his wounds and died on June 13, 2001.[17] The suspects in both murders were identified, captured, tried, convicted.[17] Morales' killer was sentenced to life in prison without the possibility of parole.[16][17]