South African Reconnaissance Car, better known under as Marmon-Herrington Armoured Car, was a series of armoured vehicles produced in South Africa and adopted by the British Army during the World War II.

In 1938 the South African government initiated development of an armoured car. The outbreak of the war led to a vehicle based on a Ford 3-ton truck chassis.[1] As the country did not have an automotive industry to speak of, many components of the vehicle had to be imported. Chassis components were bought from Ford Canada and fitted with a four-wheel drive train produced by the American company Marmon-Herrington[2] (hence the designation), UK-made armament (with the exception of the U.S.-made Browning machine gun) and armour plates produced by the South African Iron & Steel Industrial Corporation, ISCOR. Final assembly was done by the local branch of the Dorman Long company among others

The first version, the "South African Reconnaissance Vehicle" Mk I, entered service in 1940. It was a long wheelbase four wheeled chassis with drive to only one axle. It was armed with two Vickers machine guns: one in a cylindrical turret and the other in the left hand side of the hull[2]. There were two large access doors in the rear. It saw a brief action against the Italian forces in the Western Desert and thereafter relegated to training use. Some were given to Greece and fought during the German invasion of Greece, but proved inadequate against the Germans.

The Mk II had a shorter wheelbase than the Mark I and four wheel drive by using a kit from Marmon-Herrington that gave a driven front axle. It was known in British service as Armoured Car, Marmon-Herrington Mk II. The Mark I continued in production (until the end of 1940) while supply of the units from the US was resolved.[1] For British service in the desert (known as the Middle East model) the Mark II was fitted with Bren light machine gun and Boys anti-tank rifle ; for the Union Defence Force use in South Africa (Mobile Field Force model) Vickers machine guns.

It and the Mk III were extensively used during the North African Campaign, mostly for reconnaissance being the only armoured car available in sufficient numbers, and had a reputation as a reliable, but underarmoured vehicle. Their normal armament, consisting of a 0.55 inch Boys anti-tank rifle in a turret, a coaxial Bren machine gun and one or two additional machine guns for anti-aircraft defence, was also considered insufficient.

As a large amount of weaponry was captured during the Desert campaign, units were able to modify their vehicles to reuse these.[3] Weapons fitted included the Italian 20 mm Breda and 47 mm Breda, the German 3.7 cm Pak 36 and the 2.8 cm sPzB 41 taper bore gun, the French 25 mm gun, the 20 mm Oerlikon cannon and the British QF 2 pounder anti-tank gun. As there was no place for a gun in the small turret, the latter had to be removed and the crew had to rely on the gun shield for protection. Some other vehicles were adapted to serve as artillery observation post vehicles, ambulances, command cars, recovery vehicles, and Royal Air Force liaison cars.

The Mark III was a response to a need for better armouring. To achieve this on the same chassis the body was made more compact, which also led to a shorter wheelbase. Whether produced as ME or MFF models the armament was entirely in the turret. More than two thousand Mark III were built before production stopped in mid-1942.[4]

In March 1943 a completely redesigned Mk IV/Mk IVF entered production. It was a monocoque with rear mounted engine and a turret-mounted 2 pounder with a coaxial 0.3 in Browning machine gun as the standard armament. Due to the inability of Marmon-Herrington to supply sufficient drivetrains, the F used a Canadian Ford drive train. Further versions were designed but never got beyond the prototype stage. By that time, the North African Campaign had ended and the mountainous geography of the Italian campaign did not suit armoured cars and in late 1943 the British and Commonwealth armies were receiving enough armoured cars from other sources.

In total, 5,746 Marmon-Herrington Armoured Cars were built. About 4,500 were used by South African units, while others were employed by British, Indian, New Zealand, Greek, Free French, Polish and Belgian forces. After World War II, a few were given to the Transjordan and saw combat with the Arab Legion in the 1948 Arab-Israeli War. The Mk IVF saw combat as late as July–August 1974, during the Turkish invasion of Cyprus, when it was used by the Cypriot National Guard. The Greek army used Marmon-Herringtons in the islands of the Aegean well into the 1990s, in mechanized infantry battalions of special composition, alongside Jeeps, M-113s and Leonidas AFVs. They were finally phased out of service with the introduction of VBL AFV, six decades after their introduction. 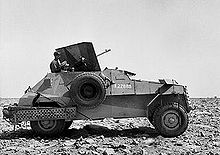 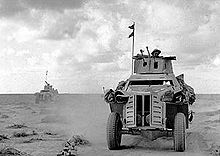 Marmon-Herrington armoured cars on patrol in the Western Desert, 28 November 1941.

The Mark IV was a completely redesigned vehicle, though still based on the same engine and Marmon-Herrington components. The rear-mounted engine and the transmission were bolted directly to the welded hull[2]. Armour protection was still thin at only 12 mm to the front and 6 mm thick elsewhere. A QF 2 pounder anti-tank gun was mounted in a two-man turret. The gun used an artillery mounting as the turret was not up to the stress of a tank mantlet mounting. Late production vehicles had a coaxial Browning MG. An anti-aircraft Vickers or Browning MG was mounted on the turret roof. Over 2,000 units built.

The Mark V was of four 8-wheeled designs[5] built as a response to reports of the German 8-wheeled armoured cars (Schwerer Panzerspähwagen). . Power was from two Albion 6-cylinder engines driving only the two middle axles. The prototype had poor performance in desert conditions and was rebuilt with both engines at the rear. Although well-armoured it was heavy at 16 tons and performance still lacked so the project was stopped. A very large vehicle armed with the QF 6 pounder gun and armoured side skirts; only the one prototype was built.[4]

The Mark VI was a return to the 8-wheeled design. Powered by two Mercury V8 engines with a eight-wheel drive steered on the front and rear wheels. Two prototypes were built, one with a 2 pounder and other with a 6 pounder gun in an open-topped three-man turret with electric powered traverse and protected by 10 to 30 mm of sloped armour. Additional armament consisted of 2 or 3 machine guns. The two-pounder equipped version was sent to the UK for assessment, the transmission proved unreliable suffering several axle failures.[6] The 2-pdr is now in the Bovington Tank Museum, the other in South Africa.

An improved version of the Mk IIIA, the project was stopped after prototypes as it was only armed with a Vickers machine gun

similar to the Mk III but with a 2 pounder gun in a bigger turret. The project was stopped in 1943 as requirements had already moved on to larger weapons such as the 6 pounder.