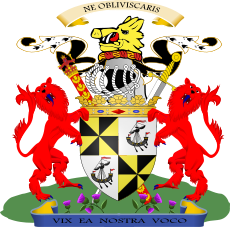 Coat of arms of his Grace the Duke of Argyll

Duke of Argyll (Scottish Gaelic: Diùc Earra-Ghàidheil) is a title, created in the Peerage of Scotland in 1701 and in the Peerage of the United Kingdom in 1892. The Earls, Marquesses, and Dukes of Argyll were for several centuries among the most powerful, if not the most powerful, noble family in Scotland. As such, they played a major role in Scottish history throughout the 16th, 17th, and 18th centuries.

The Duke of Argyll is also the chief of the Scottish clan of Campbell and in this capacity is known as "MacCailein Mòr", which is Gaelic, for "The Great MacColin" referring to Cailean Mór (Colin the Great) of Lochawe (Colin of Lochow) who was killed in fighting with Alexander, Lord of Lorne in 1296.

Sir Colin of Lochow, was knighted in 1280 and his descendant Sir Duncan was created a peer by James II of Scotland in 1445 becoming Duncan Campbell of Lochow, Lord of Argyll, Knight, 1st Lord Campbell. Colin Campbell (c. 1433–1493) succeeded his grandfather as the 2nd Lord Campbell in 1453 and was created Earl of Argyll in 1457. 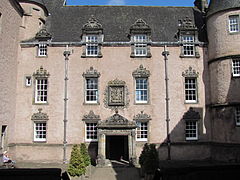 The Argylls owned a lodging (or noble townhouse) in Stirling

The 8th Earl of Argyll was created a marquess in 1641, when Charles I visited Scotland and attempted to quell the rising political crisis (and the fall-out from the event known as The Incident). With Oliver Cromwell's victory in England, the marquess became the effective ruler of Scotland. Upon the restoration, the marquess offered his services to King Charles II but was charged with treason and executed in 1661. His lands and titles were forfeited but were restored to his son in 1663, Archibald, who became the 9th Earl of Argyll. In 1685 the 9th Earl was executed for his part in the Monmouth rebellion.

On the 21 June 1701 the 9th Earl's son was created Duke of Argyll, Marquess of Kintyre and Lorne, Earl of Campbell and Cowal, Viscount of Lochow and Glenyla, Lord Inveraray, Mull, Morvern, and Tiree for his services to William of Orange. His son, the 2nd Duke, was created Baron Chatham and Earl of Greenwich in 1705 as a reward for his support for the Act of Union and further elevated to the title Duke of Greenwich in 1719. Upon his death his Scottish titles passed to his brother and the English titles became extinct.

The 5th Duke sat as a member of parliament for Glasgow until his father's accession to the Dukedom in 1761 disqualified him from representing a Scottish seat. He then became the member for Dover until 1766, when he was created as Baron Sundridge and obtained the right to sit in the House of Lords.

In 17 April 1892, the 8th Duke was created Duke of Argyll in the Peerage of the United Kingdom. Thus, the Duke is one of only five people to hold two different dukedoms, the others being the Duke of Cornwall and Rothesay, the Duke of Buccleuch and Queensberry, the Duke of Hamilton and Brandon, and the Duke of Richmond, Lennox and Gordon.

During the 19th century, a distant Prussian descendent of the family, Jenny von Westphalen, was the wife of the philosopher Karl Marx. In a famous story, when exiled to Paris and reduced to poverty, Marx was nearly arrested for attempting to pawn a part of Jenny's dowdry: a silver dinner service bearing the crest of the House of Argyll. Of the incident Marx wrote to Engels, possibly in an attempt to solicit another loan from his wealthy friend: "My wife cried all night". However, the silver was eventually sold to pay off long-standing debts incurred by the Neue Rheinische Zeitung.[1]

In the late 19th century the then current Duke of Argyll visited America, and more notably visited Babylon, Long Island, New York. While there, he stayed at the American Hotel situated in the main square of the village. The town's people took a liking to the duke, and festivals and parades took place while he visited there. Just before the turn of the century (1900) the township of Babylon renamed the Bythbourne Lake/Park to Argyle Lake/Park (Argyll evolved to the currently accepted Argyle) in memory of the duke's visit. The family seat is Inveraray Castle, Inveraray, Argyll.

The heraldic blazon for the coat of arms of the dukedom is: Quarterly: 1st and 4th gyronny of eight or and sable (for Campbell); 2nd and 3rd argent, a lymphad, sails furled, flags and pennants flying gules, and oars in action sable (for Lorne).

The heir apparent is the present holder's elder son Archie Campbell, Marquess of Lorne (b. 2004)

For further succession see above

For further succession see above