The yeast Saccharomyces cerevisiae is a simple single celled eukaryote with both a diploid and haploid mode of existence. The mating of yeast only occurs between haploids, which can be either the a or α (alpha) mating type and thus display simple sexual differentiation. Mating type is determined by a single locus, MAT, which in turn governs the sexual behaviour of both haploid and diploid cells. Through a form of genetic recombination, haploid yeast can switch mating type as often as every cell cycle.

Mating type and the life cycle of Saccharomyces cerevisiae

S. cerevisiae (yeast) can stably exist as either a diploid or a haploid. Both haploid and diploid yeast cells reproduce by mitosis, with daughter cells budding off of mother cells. Haploid cells are capable of mating with other haploid cells of the opposite mating type (an a cell can only mate with an α cell, and vice versa) to produce a stable diploid cell. Diploid cells, usually upon facing stressful conditions such as nutrient depletion, can undergo meiosis to produce four haploid spores: two a spores and two α spores.

Differences between a and α cells 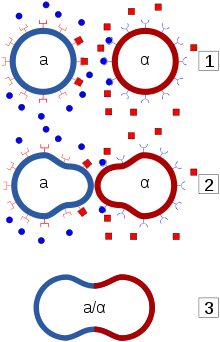 a cells produce ‘a-factor’, a mating pheromone which signals the presence of an a cell to neighbouring α cells. a cells respond to α-factor, the α cell mating pheromone, by growing a projection (known as a shmoo, due to its distinctive shape) towards the source of α-factor. Similarly, α cells produce α-factor, and respond to a-factor by growing a projection towards the source of the pheromone. The response of haploid cells only to the mating pheromones of the opposite mating type allows mating between a and α cells, but not between cells of the same mating type.

Differences between haploid and diploid cells

The different gene expression patterns of haploids and diploids are again due to the MAT locus. Haploid cells only contain one copy of each of the 16 chromosomes and thus can only possess one allele of MAT (either MATa or MATα), which determines their mating type. Diploid cells result from the mating of an a cell and an α cell, and thus possess 32 chromosomes (in 16 pairs), including one chromosome bearing the MATa allele and another chromosome bearing the MATα allele. The combination of the information encoded by the MATa allele (the a1 gene) and the MATα allele (the α1 and α2 genes) triggers the diploid transcriptional program. Similarly, the presence of only a single allele of MAT, whether it is MATa or MATα, triggers the haploid transcriptional program.

The alleles present at the MAT locus are sufficient to program the mating behaviour of the cell. For example, using genetic manipulations, a MATa allele can be added to a MATα haploid cell. Despite having a haploid complement of chromosomes, the cell now has both the MATa and MATα alleles, and will behave like a diploid cell: it will not produce or respond to mating pheromones, and when starved will attempt to undergo meiosis, with fatal results. Similarly, deletion of one copy of the MAT locus in a diploid cell, leaving only a single MATa or MATα allele, will cause a cell with a diploid complement of chromosomes to behave like a haploid cell.

Location of the silent HML and HMR loci and the active MAT locus on yeast chromosome III.

Haploid yeast switch mating type by replacing the information present at the MAT locus. For example, an a cell will switch to an α cell by replacing the MATa allele with the MATα allele. This replacement of one allele of MAT for the other is possible because yeast cells carry an additional silenced copy of both the MATa and MATα alleles: the HML (Hidden MAT Left) locus typically carries a silenced copy of the MATα allele, and the HMR (Hidden MAT Right) locus typically carries a silenced copy of the MATa allele. The silent HML and HMR loci are often referred to as the silent mating cassettes, as the information present there is 'read into' the active MAT locus.

Mechanics of the mating type switch

The process of mating type switching is a gene conversion event initiated by the HO gene. The HO gene is a tightly regulated haploid-specific gene that is only activated in haploid cells during the G1 phase of the cell cycle. The protein encoded by the HO gene is a DNA endonuclease, which physically cleaves DNA, but only at the MAT locus (due to the DNA sequence specificity of the HO endonuclease).

Once HO cuts the DNA at MAT, exonucleases are attracted to the cut DNA ends and begin to degrade the DNA on both sides of the cut site. This DNA degradation by exonucleases eliminates the DNA which encoded the MAT allele; however, the resulting gap in the DNA is repaired by copying in the genetic information present at either HML or HMR, filling in a new allele of either the MATa or MATα gene. Thus, the silenced alleles of MATa and MATα present at HML and HMR serve as a source of genetic information to repair the HO-induced DNA damage at the active MAT locus. The cells prefere to change the mating type, i.e. a MATa cell will rather use HMLα to fill the gap thus become MATα and vice versa. The mechanism for this specificity is unknown.

Directionality of the mating type switch

This is the result of the action of a recombination enhancer (RE) [1] located on the left arm of chromosome III. Deletion of this region causes a cells to incorrectly repair using HMR. In a cells, Mcm1 binds to the RE and promotes recombination of the HML region. In α cells, the α2 factor binds at the RE and establishes a repressive domain over RE such that recombination is unlikely to occur. An innate bias means that the default behaviour is repair from HMR. The exact mechanisms of these interactions are still under investigation.