The dam under construction

In the lower current of the Dnieper River there were almost 100 km long part of the river filled with rapids. Now this is the distance between the modern cities Dnepropetrovsk and Zaporozhie In the 19th century engineers worked on the projects to make the river navigable. The projects for the flooding of the rapids were proposed by N. Lelyavsky in 1893, V. Timonov(RU) in 1894, S. Maximov and G. Graftio(RU) in 1905, A. Rundo and D. Yuskevich in 1910, I. Rozov and L. Yurgevich in 1912, Mohylko.[1][2] While the main objective of these projects was to improve navigation, hydropower generation appeared concurrently, in terms of "utiliztion of the freely flowing water".[3] G. Graftio's(RU) project of 1905 included three dams with a small area of flooding.

Lenin's slogan "Communism is Soviet power plus the electrification of the whole country" became a motto for Soviet industrialization. On February 7, 1920, the All-Russian Central Executive Committee of the Soviets announced the formation of a State Electrification Commission (GOELRO) under the chairmanship of the Bolshevik electrical engineer, Gleb Krzhizhanovskii. The task of the commission was to devise a general plan for electrifying the country via the construction of a network of regional power stations. Ten months later, GOELRO presented its plan, a document of more than five hundred pages, to the Eighth Congress of Soviets in Moscow.

The Dneprostroi Dam was built on deserted land in the countryside to stimulate Soviet industrialization. The design that was accepted dates back to the GOELRO electrification plan for the USSR, which was adopted in early 1920s. The station was designed by a group of engineers headed by Prof. Ivan Alexandrov, a chief expert of GOELRO who later became a head of the RSFSR State Planning Commission. The station was planned to provide electricity for several aluminium production plants and a high quality steel production plant that were also to be constructed in the area.[4]

September 17, 1932, for "the outstanding work in the construction of DniproHES" the Soviet government awarded six American engineers (included Hugh Cooper, G. Thompson, the engineer of General Electric), the Order of the Red Banner of Labour.

Soviet Industrialization was accompanied by a wide propaganda effort. Leon Trotsky, by then out of power, campaigned for the idea within the ruling Politburo in early 1926. In a speech to the Komsomol youth movement, he said:

In the south the Dnieper runs it's course through the wealthiest industrial lands; and it is wasting the prodigious weight of its pressure, playing over age-old rapids and waiting until we harness it's stream, curb it with dams, and compel it to give lights to cities, to drive factories, and to enrich ploughland. We shall compel it! [6]

The dam and its buildings were designed by the constructivist architects Viktor Vesnin and Nikolai Kolli. Construction began in 1927 and the plant started to produce electricity in October 1932.[4] Generating some 650 MW, the station became the largest Soviet power plant at the time and one of the largest in the world.[4] American specialists under the direction of Colonel Hugh Cooper took part in the construction. The first five giant power generators were manufactured by General Electric. During the second 5-year plan four more generators of similar power produced by Elektrosila in Leningrad were installed.[4] The Dneprostroi Dam was the largest in Europe at the time of its construction.

The industrial centres of Zaporizhia, Kryvy Rih and Dnipropetrovsk grew from the power provided by the station, including such energy-consuming industries as aluminium production, which was vitally important for Soviet aviation. 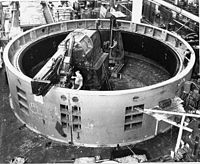 Milling of the Dneprostroi Dam generators at General Electric

During World War II, the strategically important dam and plant was dynamited by retreating Red Army troops in 1941, and then again by the retreating German troops in 1943. In the end the dam suffered extensive damage, and the powerhouse hall was nearly destroyed. Both were rebuilt between 1944 and 1949.

General Electric built the new generators for the Dam. Their weight was more than 2,250,000 pounds. The generators replaced those destroyed during the WWII. Each of the new units is rated 90,000 kilo-volt-amperes, as compared with the 77,500 kV-a of the old generators, built in 1931. A frame diameter of 42 feet, 5 inches, Units have been shipped in 1946.[7]

Power generation was restarted in 1950. In 1969-80, the second powerhouse was built with a production capacity of 836 MW.

Currently, the dam is over 800 metres long and 61 metres high. The dam elevates the river water up to 37 m, which floods the rapids above and makes the entire Dnieper navigable. Over its long history, the dam was hailed as one of the greatest achievements of Soviet industrialization programs.

Today the dam has been privatized and continues to power the adjacent industrial complexes. The pressure of the water leaving the dam is at 38,7 metres and the reservoir that is behind it is 33.3 cubic kilometres. The dam is also used by automobile traffic.