Albena Denkova (Bulgarian: Албена Денкова) (born 3 December 1974 in Sofia) is a Bulgarian ice dancer. With partner and fiance Maxim Staviski, she is the 2006 & 2007 World Champion, the 2003 & 2004 European silver medalist, and the 2006 Grand Prix Final champion. Denkova & Staviski are the first Bulgarian figure skaters to medal at the World Figure Skating Championships. 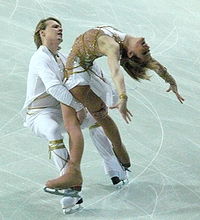 Albena Denkova with Maxim Staviski at the 2007 European Championships in Warsaw.

Denkova began her athletic career as a gymnast at the age of four, and switched to figure skating at about 8 or 9.[1] She took up ice dancing when she was 12.[1] Her first ice dance partner was Hristo Nikolov but they split up due to different ambitions.[1] In 1996, Denkova had a successful tryout with Maxim Staviski in Moscow and he moved to Sofia to compete with her for Bulgaria.[1] They soon became a couple off-ice, as well. In 2000, Denkova/Staviski began dividing their time between Sofia and Odintsovo, near Moscow, Russia where they worked with coach Alexei Gorshkov and choreographer Sergei Petukhov.[1][2] 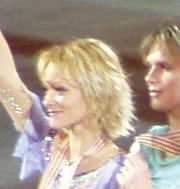 Denkova and Staviski at the 2004 Worlds medal ceremony in Dortmund.

They withdrew from the 2000 European Championships after Staviski fell ill with pneumonia.[1] At the 2000 World Championships, Denkova was seriously injured in the practice before the free dance; Peter Tchernyshev's blade slashed her leg above her boot, severing two tendons and a muscle.[1] She eventually returned to training but suffered swelling in her leg. After she asked the U.S. Figure Skating Association if Tchernyshev had insurance to help cover her medical expenses, the organizers withdrew Denkova/Staviski's invitation to 2000 Skate America.[1] Both Denkova and Staviski fell ill with the flu before the 2001 European Championships and she suffered more swelling but they competed at the event and finished 8th, their best result to that date.[1]

After the 2005 World Championships, Denkova and Staviski parted ways with Gorshkov and moved to Delaware, U.S., to train with Natalia Linichuk and Gennadi Karponossov.[3] In October 2006, it was announced that Denkova had been elected President of the Bulgarian Skating Federation.[3][4]

On 5 August 2007, Maxim Staviski caused a car accident while driving drunk in Bulgaria that left 24-year-old Petar Petrov dead and Petrov's fiancee, 18-year-old Manuela Gorsova, in a coma.[5] In October 2007, he announced his retirement from competitive skating and Denkova was thus forced to retire, as well.[6]

In 2004, Denkova noted that Bulgaria did not have many skating facilities and coaches and said she and Staviski were considering opening a school.[2] Together, they now have a skating school in Sofia called SC Ice Dance Denkova/Staviski.[7] They continued to skate in shows around the world and have also done choreography, working with Brian Joubert in 2009.[4]

Denkova and Staviski are engaged to marry.[8] Their son Daniel was born on January 30, 2011.[9] Denkova has a younger sister, Ina Demireva, who also competed in ice dancing.[10] Her brother-in-law is single skater Andrei Lutai.[11] Denkova holds a degree in economics from Sofia University.