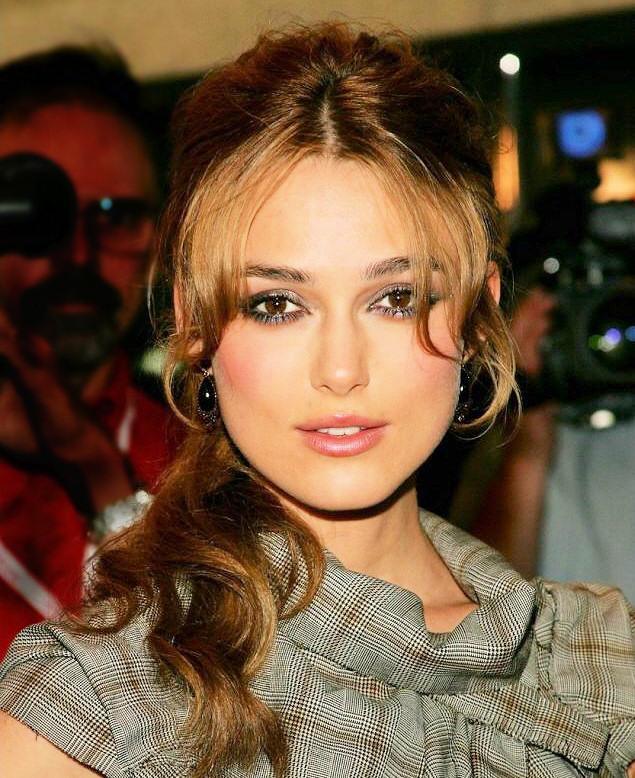 Knightley has appeared in several Hollywood films and earning an Academy Award nomination for her role as in Joe Wright's 2005 adaptation of Jane Austen's "".

As of 2008, Forbes claims Knightley to be the second highest paid actress in Hollywood (behind ), having reportedly earned $32 million in 2007, making her the only non-American person on the list of highest paid actors or actresses. [ [http://www.somersetcountygazette.co.uk/uk_national_entertainment/3543885.Diaz_top_earning_Hollywood_actress/ The Press Association: Diaz top earning Hollywood actress ] ] [ [http://www.telegraph.co.uk/news/newstopics/celebritynews/2455107/Keira-Knightley-is-highest-earning-British-Hollywood-star-on-Forbes-list.html Keira Knightley is highest earning British Hollywood star on Forbes list - Telegraph] ] [ [http://www.canada.com/montrealgazette/news/arts/story.html?id=498ffdca-2c9d-4d6a-9a0c-dcb944bc8f21. Story The Gazette (montreal) ] ] Knightley, however has denied such figure.

Knightley was born in , , , the daughter of , an award-winning , and , a theatre and television actor. Her father is English and her mother is Scottish and of half Welsh ancestry. [ [http://www.rottentomatoes.com/m/edge_of_love/news/1736206/rt_interview_keira_knightley_on_welsh_accents_and_life_after_pirates Keira Knightley On Welsh Accents and Life After Pirates] , rottentomatoes.com] She has an elder brother, Caleb, who was born in 1979. Knightley lived most of her life in Richmond, attending and . Knightley has , but nevertheless was successful in school and was thus permitted to acquire a talent agent and pursue an acting career. She requested an agent as early as the age of three but got one when she turned six, from her mother as a reward for studying hard. Knightley has noted that she was "single-minded about acting" during her childhood.

Knightley appeared in several s in the mid to late 1990s—including 's ""—before being cast as Sabé, 's decoy, in the 1999 blockbuster "". Knightley was cast in the role due to her close resemblance to , who played Padmé; the two actresses' mothers had difficulty telling their daughters apart when the girls were in full makeup.

Knightley had a role in the British romantic comedy "", which opened in November 2003. Though charismatic, her performance was overlooked in the crowded A-List cast. Her next film, "King Arthur", opened in July 2004 to negative reviews. In the same month, Knightley was voted by readers of "" magazine as the film industry's most promising teen star. Additionally, "Time" magazine noted in a 2004 feature that Knightley seemed dedicated to developing herself as a serious actress rather than a film star.

Knightley's biggest financial hit thus far, ', was released on July 7, 2006. On June 3, 2007, Knightley was up for an MTV Movie Award for Best Performance but she lost to her co-star, Johnny Depp. 2007 saw the release of several films starring Knightley: "Silk", an adaptation of the novel by , "Atonement", a feature film adaptation of 's novel of the same name (co-starring , , and ),', which was released on May 24, 2007. Knightley's performance in "Atonement" began to generate buzz before the film was released; she was nominated for a in the Best Dramatic Actress category for the role, as well as a BAFTA. Critic Richard Roeper was puzzled by both Knightley's and McAvoy's Academy Award snubs stating "I thought McAvoy and Knightly were superb." [http://bventertainment.go.com/tv/buenavista/ebertandroeper/chat/transcript-roeper-080220.html]

In the late spring of 2007, Knightley shot "" with as her husband, as her childhood sweetheart, Welsh poet , and as Thomas' wife . She has received, for the most part, very positive reviews for her role. [http://goldderby.latimes.com/awards_goldderby/2008/09/toronto-festi-1.html] This 2008 release was penned by her mother, , and directed by . She then began work on "The Duchess" based on the best-selling biography, "Georgiana, Duchess of Devonshire" by Amanda Foreman [http://www.amanda-foreman.com] in which she plays ; the film was released in cinemas on September 5, 2008 in the U.K. Knightley has been praised for her portrayal of Georgiana. [http://goldderby.latimes.com/awards_goldderby/2008/09/toronto-festi-1.html] Critic and Co-Chair of the , Cameron Bailey, stated that "The Duchess Of Devonshire, with Keira Knightley, which is a beautiful film and she gives a really mature performance. You're seeing her really turn into something beyond the kind of pretty face that we've seen her do already so well. But she's actually a very serious actress and she's turning into a great, great performer." [http://www.citynews.ca/news/news_25966.aspx] Critic Edward Douglas writes "we were blown away by Keira Knightley's performance in the costume drama "The Duchess"...Knightley is even better in it than "Atonement" and "Pride & Prejudice"." [http://www.citynews.ca/news/news_25966.aspx] "" critic Lou Lumenick writes that in terms of an Oscar nomination, that Knightley "seems a lock for "The Duchess" and goes on to say that she "shines" in this role. [http://www.nypost.com/seven/09122008/entertainment/movies/canada_points_to_oscars_128667.htm]

Keira's next film roles include "King Lear", and the modern drama "Last Night" in which she will co-star with Eva Mendes, Sam Worthington and Guillaume Canet. It is to be directed by Massy Tadjedin [http://www.thehollywoodnews.com/artman2/publish/movie_news/Keira-Knightley-to-look-back-at-Last-Night-12180908.php] and will start filming in October 2008 in New York. [http://afp.google.com/article/ALeqM5iJwNVdMw3ywlKhuI8T2r1MDY0MxQ] She is also rumoured to be starring in The Beautiful and the Damned, a biopic about the life and relationship of American novelist F. Scott Fitzgerald and his novelist wife Zelda Sayre [http://nymag.com/daily/entertainment/2008/09/brace_yourself_keira_knightley.htmllKhuI8T2r1MDY0MxQ] Knightley has recently confirmed that she will not be starring in the fourth installment of Pirates of the Caribbean. [http://www.cinemablend.com/new/Keira-Knightley-Confirms-She-s-Done-With-Pirates-10335.html]

As a result of her rapid rise to fame, Knightley has been the focus of significant media attention. She has been described by press reports as "famously open with media,"

Knightley was the celebrity face for the luxury goods brand Asprey, as well as Lux haircare products in Japanese television commercials. In April 2006, she was confirmed as the new celebrity face of 's perfume , though the first photo from the campaign was not released until May 2007. [ [http://www.fashionising.com/diary/b--Keira-Knightley-for-Chanel-first-photo-540.html Keira Knightley for Chanel - first photo] . "Fashionising". Retrieved on July 18, 2007.]

Her Valentino gown at the 2006 s won her much acclaim and even landed her the top spot on 's "Best Dressed List" on "", while the dress she wore to the 2006 Academy Awards was recently donated to the charity , where it raised £4,300.

Knightley has warned children who dream of the celebrity life that it's not all what it seems to be. "It frightens me when kids go, 'I want to be famous.'" [cite web| url=http://www.myparkmag.co.uk/articles/celebrity/keira-knightley/keira-to-kids-dont-get-famous.html| title=Keira to kids: Don't get famous]

In a recent interview with the BBC Knightley said that she feels "de-humanised" [ [http://www.huffingtonpost.com/2007/08/28/atonement-star-keira-kn_n_62115.html "Atonement" Star Keira Knightley: "Once You Become Famous You Get Completely Dehumanised" ] ] . She also said that when a person becomes a celebrity, the public doesn't care that the person's life is constantly watched.

While she has no current plans to leave the world of film, Knightley has said that she could not imagine subjecting a child to the media. She is quoted as saying; "I'm not planning to have children at the moment... everyone changes, and I'm sure there will be a time I will want to do something different. I could completely see myself moving away [from acting] ." [(7 September 2007) [http://www.bbc.co.uk/pressoffice/pressreleases/stories/2007/09_september/07/ross.shtml Keira Knightley talks to new look Jonathan Ross as BBC One series returns] , ]

Knightley, who lives in , is involved with her "Pride and Prejudice" co-star . [cite web|url=http://www.hellomagazine.com/film/2008/09/12/striped-pyjamas-prem/|title=David joined by young co-stars and Dustin at 'Pyjamas' premiere|date=12 SEPTEMBER 2008|publisher=Hello! Magazine|accessdate=2008-09-13] [cite news|url=http://www.dailymail.co.uk/tvshowbiz/article-1052231/The-horrifying-moment-I-abused-thug-The-Duchess-star-Keira-Knightley.html|title='The horrifying moment I was abused by a thug,' by The Duchess star Keira Knightley|last=Simpson|first=Richard|coauthors=Lizzie Smith|date=05 September 2008|publisher=Daily Mail Online|accessdate=2008-09-13] Knightley has stated she has no plans to be married in the near future. She previously dated Northern Irish fashion model ,

She has denied rumors she is anorexic (she also claimed recently in "Vanity Fair" magazine her slim physique was due to the ) [Vanity Fair Magazine 28/07/2008] , although after her appearance at the "" premiere led to media speculation that her extremely slender figure was due to an , she noted that her family has a history of anorexia.

Knightley is a lifelong supporter of football team , and watches games in her local pub whenever possible.