CD-i, or Compact Disc Interactive, is the name of an interactive multimedia CD player developed and marketed by Royal Philips Electronics N.V. CD-i also refers to the multimedia Compact Disc standard used by the CD-i console, also known as Green Book, which was developed by Philips and Sony (not to be confused with MMCD, the pre-DVD format also co-developed by Philips and Sony). Work on the CD-i began in 1984 and it was first publicly announced in 1986.[2] The first Philips CD-i player, released in 1991 and initially priced around USD $700,[3] is capable of playing interactive CD-i discs, Audio CDs, CD+G (CD+Graphics), Karaoke CDs, and Video CDs (VCDs), though the last requires an optional "Digital Video Card" to provide MPEG-1 decoding.

The CD-i proved to be a commercial failure in that market segment and some of its games have been known to be among the least well received ever made.[1] Philips ceased publishing video games for the platform in 1998.

Early software releases in the CD-i format focused heavily on educational, music, and self-improvement titles, with only a handful of video games, many of them adaptations of board games such as "Connect Four". Later attempts to develop a foothold in the games market were rendered irrelevant by the arrival of cheaper and more powerful consoles, such as the Nintendo 64 and PlayStation. The CD-i is noted for the release of several spinoffs of popular Nintendo video games featuring characters typically seen only on Nintendo consoles, although those games were not developed by Nintendo. Hotel Mario was a puzzle game that featured Super Mario Bros. characters.

Philips also released several versions of popular TV game shows for the CD-i, including versions of Jeopardy! (hosted by Alex Trebek), Name That Tune (hosted by Bob Goen), and two versions of The Joker's Wild (one for adults hosted by Wink Martindale and one for kids hosted by Marc Summers). All CD-i games in North America (with the exception of Name That Tune) had Charlie O'Donnell as announcer. The Netherlands also released its version of Lingo on the CD-i in 1994.

In 1993, American musician Todd Rundgren created the first music-only fully interactive CD, No World Order, for the CD-i. This application allows the user to completely arrange the whole album in their own personal way with over 15,000 points of customization.

CD-i has a series of learning games ("edutainment") targeted at children from infancy to adolescence. Those intended for a younger audience included Busytown, The Berenstain Bears, and various others which usually had vivid cartoon-like settings accompanied by music and logic puzzles.

Although extensively marketed by Philips, notably via infomercial, consumer interest in CD-i titles remained low. By 1994, sales of CD-i systems had begun to slow, and in 1998 the product line was dropped.

A large number of FMV titles such as Dragon's Lair and Mad Dog McCree appeared on the system. One of these, Burn:Cycle, is considered one of the stronger CD-i titles and was later ported to PC.

With the home market exhausted, Philips tried with some success to position the technology as a solution for kiosk applications and industrial multimedia. The console still maintains a cult following on the Internet. Additionally, a Mario game (titled Hotel Mario), and three Legend of Zelda games were released: Link: The Faces of Evil, Zelda: The Wand of Gamelon and Zelda's Adventure. Nintendo and Philips had established an agreement to co-develop a CD-ROM enhancement for the Super Nintendo Entertainment System (after Nintendo and Sony scrapped a previous deal on an earlier add-on for the SNES, which would eventually result in the creation of the PlayStation), and Philips was contractually allowed to continue using Nintendo characters after the deal fell through.

There also exist a number of hard-to-categorize models, such as the FW380i, an integrated mini-stereo and CD-i player; the 21TCDi30, a television with a built-in CD-i device; and the CD-i 180/181/182 modular system, the first CD-i system produced.

Recognizing the growing need among marketers for networked multimedia, Philips partnered in 1992 with Amsterdam based CDMATICS to develop TeleCD-i (also TeleCD). In this concept, the CD-i player is connected to a network (PSTN, Internet or other) enabling data-communication and rich media presentation. Dutch grocery chain Albert Heijn and mail-order giant Neckermann Shopping were early adopters and introduced award-winning TeleCD-i applications for their home-shopping and home-delivery services. CDMATICS also developed the special Philips TeleCD-i Assistant and a set of software tools helping the worldwide multimedia industry to develop and implement TeleCD-i. TeleCD-i was the world's first networked multimedia application at the time of its introduction. In 1996, Philips acquired source code rights from CDMATICS. 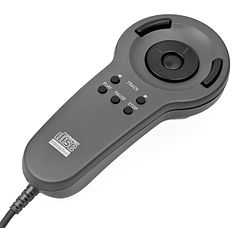 A game controller for the Philips CD-i. The CD-i's controllers were heavily criticised. 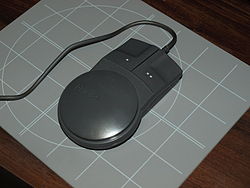 The CD-i was met with horrid reviews that criticized it's price, graphics, games, and controls. In fact, the CD-i's various controllers were ranked the fifth worst video game controller by IGN editor Craig Harris.[6] PC World (magazine) even went far enough to rank it as the fourth worst system of all time on their list of The 10 Worst Video Game Systems of All Time. [7] Gamepro.com also listed the game as number 4 on their list of The 10 Worst-Selling Consoles of All Time. [8] In 2008, CNET also listed the system on its list of The worst game console(s) ever. [9]

Games that were met with poor reception include Link: The Faces of Evil, Zelda: The Wand of Gamelon and Zelda's Adventure. These games were met with incredibly poor reception and have gone on to become regarded as some of the most notoriously bad games in the history of video games. [10]