Wards for the local elections from 2002

Oxford local elections for the Oxford City Council in Oxford, England, take place every two years when half of the 48 seats in the City Council are up for election. Elections are held in even-numbered years; the next is due to take place in 2012. Until 2002 the council was elected by thirds.

As vacancies arise between elections, by-elections are held to elect a replacement councillor.

Detailed results are available, by year, as follows: 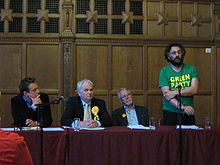