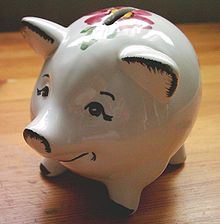 Piggy bank from around 1970

Piggy bank (sometimes penny bank or money box) is the traditional name of a coin accumulation and storage receptacle; it is most often, but not exclusively, used by children. The piggy bank is known to collectors as a "still bank" as opposed to the "mechanical banks" popular in the early 20th century. These items are also often used by corporations for promotional purposes. Their shape is most often that of a little pig. Many financial services companies use piggy banks as logos for their savings products. 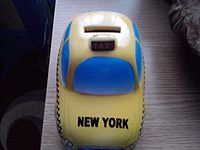 Piggy banks are typically made of ceramic or porcelain, and serve as a pedagogical device to teach the rudiments of thrift and savings to children; money can be easily inserted, but in the traditional type of bank the pig must be broken open for it to be retrieved. Most modern piggy banks, however, have a rubber plug located on the underside; others are made of vinyl and have a removable nose for easy coin access. Some piggy banks incorporate electronic systems which calculate the amount of money deposited.[1] 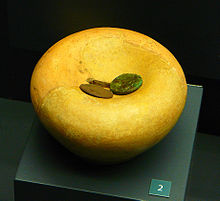 In Middle English, "pygg" referred to a type of clay used for making various household objects such as jars. People often saved money in kitchen pots and jars made of pygg, called "pygg jars". By the 18th century, the spelling of "pygg" had changed and the term "pygg jar" had evolved to "pig bank." [3] Once the meaning had transferred from the substance to the shape, piggy banks began to be made from other substances, including glass, plaster, and plastic.

An alternative theory, and the one usually given for the origin in German sources, is that in Germany and surrounding countries the pig is a symbol of good luck or good fortune (see Pigs in folklore), hence keeping money in a piggy bank will bring good fortune.

The oldest find of a money box dates from 2nd century B.C. Greek colony Priene, Asia Minor, and features the shape of a little Greek temple with a slit in the pediment. Money boxes of various forms were also excavated in Pompeii and Herculaneum, and appear quite frequently on late ancient provincial sites, particularly in Roman Britain and along the Rhine.[2] 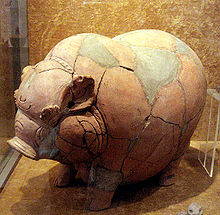 In a curious case of parallel evolution, the Indonesian term celengan (a celeng is a wild boar, with the "an" affix used to denote a likeness) was also used in the context of domestic banks. The etymology of the word is obscure, but evident in a Majapahit piggy bank from the 15 century A.D.[citation needed]

The general use of piggy banks is to store loose change in a quaint, decorative manner. Modern piggy banks are not limited to the likeness of pigs, and may come in a range of animal shapes, sizes and colours. Some collect piggy banks as a hobby.[citation needed]

Rachel, the official mascot of Pike Place Market in Seattle, Washington, is a bronze cast piggy bank that weighs nearly 600 pounds, located at the corner of Pike Place under the "Public Market Center" sign. 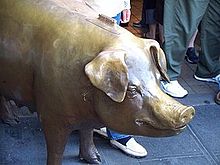 Rachel was designed by local artist Georgia Gerber and modeled after a pig (also named Rachel) that lived on Whidbey Island and was the 1977 Island County prize-winner. Rachel receives roughly $9,000 annually in just about every type of world currency, which is collected by the Market Foundation to fund the Market's social services.[4][5]