Extreme is an American rock band, headed by frontmen Gary Cherone and Nuno Bettencourt,[1] that reached the height of their popularity in the late 1980s and early 1990s.

Among some of Extreme's musical influences are Queen and Van Halen.[2] (Gary Cherone and Nuno Bettencourt joined Queen onstage at The Freddie Mercury Tribute Concert in 1992 and Gary Cherone joined Van Halen in 1996); The band have described their music as "Funky Metal".

They have released five studio albums, two EPs (in Japan) and two compilation albums since their formation. The band was one of the most successful rock acts of the early 1990s, selling over 10 million albums worldwide.[3] Extreme achieved their greatest success with their 1990 album Pornograffitti, which peaked at number 10 on the Billboard 200, and was certified gold in May 1991 and 2×platinum in October 1992.[4] That album featured the acoustic ballad single "More Than Words", which reached #1 on Billboard's Hot 100 in the United States. "More Than Words" has also been featured in the movie "The Love Guru" being sung by Mike Myers as Guru Pitka.

Extreme was formed in Malden, Massachusetts, in 1985. Vocalist Gary Cherone and drummer Paul Geary were in a band called The Dream ("Extreme" is a derivation of Cherone and Geary's former band "The Dream", meaning "Ex-Dream"). Guitarist Nuno Bettencourt was in a band called Sinful, and bassist Pat Badger was playing with a Berklee-based outfit called In The Pink. Following an altercation between the rival groups over communal dressing rooms, the four decided to form a new band together.

Cherone and Bettencourt began writing songs together and the band played numerous shows in the Boston area. They gradually developed a strong local following, and were named "Outstanding Hard Rock/Heavy Metal Act" at the Boston Music Awards in 1986 and 1987.

The band had accumulated several original songs by the time A&R director Bryan Huttenhower signed them to A&M Records in 1988. The band then recorded their self-titled debut album which was issued in 1989. The first single was "Kid Ego," a song that Cherone would later admit made him cringe. The final track on the album, "Play With Me," was used as the "mall chase" song in the film Bill & Ted's Excellent Adventure.

Sales of Extreme's first record were sufficient to support a second release. Michael Wagener, who had previously worked with Dokken and White Lion, was hired to produce the band's Extreme II: Pornograffitti album in 1990.

The record, which showcased Bettencourt's guitar-playing, was a mixture of funk, pop and Glam metal sounds. "Decadence Dance" and "Get the Funk Out" were released as singles. "Get The Funk Out" reached number 19 in the UK charts in June 1991. Neither single was successful in the United States, however, and the album had fallen off the charts when A&M sent the third single to a number of radio stations in Arizona.

The acoustic ballad "More Than Words" entered the Hot 100 on March 23, 1991, at Number 81. It later became a huge smash, hitting Number 1 on Billboard's Hot 100 in the United States. The subsequent single, "Hole Hearted", another acoustic track, was also successful, rising to Number 4 on the same popular music chart.

The band began recording their third album in 1992. Their appearance at the Freddie Mercury Tribute Concert in April 1992 interrupted the recording sessions, but it gave the band considerable exposure beyond the heavy metal fraternity. III Sides to Every Story was released on September 22, 1992. The first single from the album, "Rest in Peace", had an accompanying video clip inspired by a film short by the National Film Board of Canada called Neighbours. The band was sued for plagiarism, but they quickly settled out of court, later releasing a new version of the clip. The album contained noticeable religious themes, presumably put there by Cherone, who noted in interviews being interested in evangelical preachers.[citation needed] The album was generally favored by music critics and some fans, but it failed to sell as well as Pornograffitti.

Prior to the band's appearance at Donington's Monsters of Rock festival in the summer of 1994 (where they were booed off the stage), Mike Mangini (ex-Annihilator) replaced Paul Geary on drums, who left the band to pursue a career on the business side of the music industry, managing successful acts such as Godsmack.

The first record to feature Mangini, Waiting for the Punchline, was released on February 7, 1995. The singles "Hip Today", "Unconditionally," and "Cynical" were released, but the album sold less than III Sides to Every Story and Extreme disbanded in 1996, on amicable terms.

In 1996, Cherone joined Van Halen for the recording of their album Van Halen III, issued in 1998. Although Eddie Van Halen was initially drawn to Cherone as a lyricist, Cherone's socially aware lyrical style did not translate well to Van Halen's 'sex, drugs, and rock n' roll'-based catalog of songs and particular fan base. Fans also disliked the differences between his vocal style and that of previous frontman Sammy Hagar. Those differences led to his quick departure from the band in 1999.

Nuno Bettencourt went on to release a solo album titled Schizophonic in 1996. In 1998 he formed a group called Mourning Widows who released a self-titled album that year and a follow-up album, Furnished Souls For Rent, in 2000. Following the breakup of that band, he released another solo album under the project name of Population 1 in 2002. Acquiring new members, he decided to keep the name Population 1 and released a five-song E.P. entitled "Sessions from Room 4" in 2004. They then changed the band's name to Dramagods and created a follow-up CD entitled Love in 2005.

Extreme reformed for a short tour in 2004 playing in the Azores (August), in their hometown of Boston at the WAAF anniversary (Sept.19) as well as a few concerts in Japan (January 2005). After a hiatus during 2005, the band returned in 2006 with the "classic" Pornograffitti line-up to do a small, three-show reunion tour through New England.

On November 26, 2007, the band announced plans for a world tour in the summer of 2008 with King's X as well as a release date for their new album, Saudades de Rock, produced by Bettencourt. Kevin Figueiredo, who played with Bettencourt in DramaGods and Satellite Party, took over drum duties for the band. Original drummer Paul Geary is still involved with the band, albeit in a management position. Singles from the album have been available on MySpace including "Star". The album was released on July 28, 2008 in France, August 4, 2008 in Europe, and August 12, 2008 in the United States.

The band then embarked on the Take Us Alive World Tour, supported by King's X in the US and Hot Leg in the UK, with various other dates in Europe and Asia, through all of 2008. In 2009, the band continued to tour, co-headlining the East Meets West Tour with Ratt.

According to a December 2010 interview with singer Gary Cherone, Extreme has been writing new material for their next album, which they plan to release sometime in 2011. Asked in the same interview if the band will produce the new album by themselves or get an outside producer, Cherone replied, "There's talk of a few people. It would be great to get an A-list name. I don't know if that happens. My dream producer would probably be Rick Rubin. Here's a guy that's done Johnny Cash, the Chili Peppers and you know, Neil Diamond."[5] 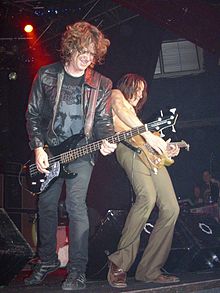