The Diamond Arm (Russian: Бриллиантовая рука, translit. Brilliantovaya ruka) is a 1968 Soviet comedy film filmed by Mosfilm and first released in 1968. The film was directed by slapstick director Leonid Gaidai and starred several famous Soviet actors, including Yuri Nikulin, Andrei Mironov, Anatoli Papanov, Nonna Mordyukova and Svetlana Svetlichnaya. The Diamond Arm has become a Russian cult film. It was also one of the all-time leaders at the Soviet box office with over 76,700,000 theatre admissions in the Soviet era.

The boss of a black market ring (known only as "The Chief") wants to smuggle a batch of jewelry into the Soviet Union by hiding it into the orthopedic cast of a courier. The contraband ends up in the cast on the arm of "ordinary Soviet citizen" Semyon Semyonovich Gorbunkov who gets mistaken for the courier while on a cruise shore excursion. He lets the militsiya know about this, and the militsiya captain uses Gorbunkov as bait to catch the criminals. Most of the plot are various attempts of two inept crooks, Lyolik and Gennadiy Kozodoyev,to lure Gorbunkov into a situation where they could have quietly, without a wet job, taken the cast off him. 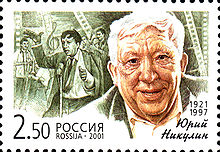 Nearly every expression from the movie became popular in Russian culture or has passed into everyday use. 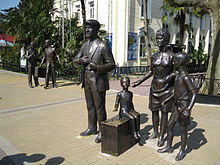 A monument to the characters of The Diamond Arm in Sochi, Russia

The Song about Rabbits

The metaphorical song "About Hares" ("Песня про зайцев") became a popular song during the late 60's. It tells a story of some poor, terrified hares stealthily cutting the grass (or weed) at nighttime, despite their fears of some frightening forest shadows. Still, the hares boldly sing their refrain that can be roughly translated as "For us it's all the same!" ("A нам всё равно!"). Nowadays the song is also a popular hint to the cannabis as the weed in the lyrics is mysteriously named by a nonsense word "tryn".

Sang in the movie by the protagonist Semyon Gorbunkov after heavy dose of vodka at the restaurant. The scene was even later depicted on a stamp dedicated to the actor. Recorded by Yuri Nikulin himself.

The Island of No Luck

Ironical "The Island of No Luck" ("Остров невезения"). Sang in the movie by the Kozlodoyev.