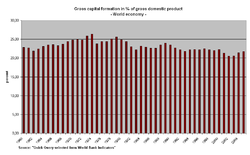 Capital formation is a concept used in macroeconomics, national accounts and financial economics. Occasionally it is also used in corporate accounts. It can be defined in three ways:

Use in national accounts statistics

In the national accounts (e.g., in the United Nations System of National Accounts and the European System of Accounts) gross capital formation is the total value of the gross fixed capital formation (GFCF), plus changes in inventories, plus acquisitions less disposals of valuables for a unit or sector.

"Total capital formation" in national accounting equals fixed capital investment, plus the increase in the value of inventories held, plus (net) lending to foreign countries, during an accounting period (a year or a quarter). Capital is said to be "formed" when savings are utilized for investment purposes, often investment in production.

In the USA, statistical measures for capital formation were pioneered by Simon Kuznets in the 1930s and 1940s, and from the 1950s onwards the standard accounting system devised under the auspices of the United Nations to measure capital flows was adopted officially by the governments of most countries. International bodies such as the International Monetary Fund (IMF) and the World Bank have been influential in revising the system.

The use of the term "capital formation" and "investment" can be somewhat confusing, partly because the concept of capital itself can be understood in different ways.

Capital formation measures were originally designed to provide a picture of investment and growth of the "real economy" in which goods and services are produced using tangible capital assets. However, the international growth of the financial sector has created many structural changes in the way that business investments occur, and in the way capital finance is really organized. This not only affects the definition of the measures, but also how economists interpret capital formation.

Capital formation is notoriously difficult to measure statistically, mainly because of the valuation problems involved in establishing what the value of capital assets is. When a fixed asset or inventory is bought, it may be reasonably clear what its market value is, namely the purchaser's price. But as soon as it is bought, its value may change, and it may change even before it is put to use. Things often become more complicated to measure when a new fixed asset is acquired within some kind of lease agreement. Finally, the rate the value of the fixed asset depreciates at affects the gross and net valuation of the asset, and different methods are typically used to value what assets are worth. Capital assets can for instance be valued at:

A business owner may in fact not even know what his business is "worth" as a going concern, in terms of its current market value. The "book value" of a capital stock may differ greatly from its "market value", and another figure may apply for taxation purposes. The value of capital assets may also be overstated or understated using various legal constructions. For any significant business, how assets are valued makes a big difference to its earnings and thus the correct statement of asset values is a perpetually controversial subject.

In national accounts, there are additional problems:

A method often used in econometrics to estimate the value of the physical capital stock of an industrial sector or the whole economy is the so-called Perpetual Inventory Method (PIM). Starting off from a benchmark stock value for capital held, and expressing all values in constant dollars using a price index, known additions to the stock are added, and known disposals as well as depreciation are subtracted year by year (or quarter by quarter). Thus, an historical data series is obtained for the growth of the capital stock over a period of time. In so doing, assumptions are made about the real rate of price inflation, realistic depreciation rates, average service lives of physical capital assets, and so on. The PIM stock values can be compared with various other related economic variables and trends, and adjusted further to obtain the most accurate and credible valuation

According to one popular kind of macro-economic definition in textbooks, capital formation refers to "the transfer of savings from households and governments to the business sector, resulting in increased output and economic expansion" (see Circular flow of income). The idea here is that individuals and governments save money, and then invest that money in the private sector, which produces more wealth with it. This definition is however inaccurate on two counts:

The concept of "household saving" must itself also be looked at critically, since a lot of this "saving" in reality consists precisely of investing in housing, which, given low interest rates and rising real estate prices, yields a better return than if you kept your money in the bank (or, in some cases, if you invested in shares). In other words, a mortgage from a bank can effectively function as a "savings scheme" although officially it is not regarded as "savings".

In the 2005 Analytical Perspectives document, an annex to the US Budget (Table 12-4: National Wealth, p. 201), an annual estimate is provided for the value of total tangible capital assets of the USA, which doubled since 1980 (stated in trillions of dollars, at September 30, 2003):