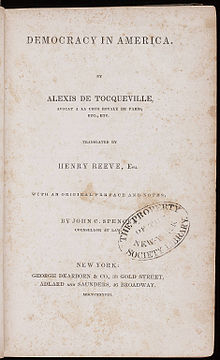 De la démocratie en Amérique (published in two volumes, the first in 1835 and the second in 1840) is a classic French text by Alexis de Tocqueville. A "literal" translation of its title is Of Democracy in America, but the usual translation of the title is simply Democracy in America. In the book, Tocqueville examines the democratic revolution that he believed had been occurring over the past seven-hundred years.

In 1831, Alexis de Tocqueville and Gustave de Beaumont were sent by the French government to study the American prison system. In his later letters, Tocqueville indicates, however, that he and Beaumont used this as a pretext to study American society instead.[1] They arrived in New York City in May of that year and spent nine months traveling the United States, studying the prisons, and collecting information on American society, including its religious, political, and economic character. The two also briefly visited Canada, spending a few days in the summer of 1831 in what was then Lower Canada (modern-day Quebec) and Upper Canada (modern-day Ontario).

After they returned to France in February 1832, Tocqueville and Beaumont submitted their report, Du système pénitentiaire aux États-Unis et de son application en France, in 1833. When the first edition was published, Beaumont, sympathetic to social injustice, was working on another book, Marie, ou, L'esclavage aux Etats-Unis (two volumes, 1835), a social critique and novel describing the separation of races in a moral society and the conditions of slaves in America. Before finishing Democracy in America, Tocqueville believed that Beaumont's study of America would prove more comprehensive and penetrating.[2]

Purpose of Democracy in America

Tocqueville begins his book by describing the change in social conditions taking place. He observed that over the previous seven-hundred years the social and economic conditions of men had become more equal. The aristocracy, Tocqueville believed, was gradually disappearing as the modern world experienced the beneficial effects of equality. Tocqueville traced the development of equality to a number of factors: allowing all men enter the clergy, trading and commerce gave economic opportunity to men everywhere, kings would sell titles of nobility to raise money, and the abolishment of primogeniture, to name a few. Tocqueville described this revolution as a "providential fact"[3] of an "irresistible revolution," leading some to criticize the determinism found in the book. However, based on his correspondences with friends and colleagues, Marvin Zetterbaum, Professor Emeritus at University of California Davis, concludes that Tocqueville never accepted democracy as determined or inevitable. He did, however, consider equality more just and therefore found himself among its partisans.[4]

Given the social state that was emerging, Tocqueville believed that a "new political science" would be needed. According to him, it would:

. . . instruct democracy, if possible to reanimate its beliefs, to purify its mores, to regulate its movements, to substitute little by little the science of affairs for its inexperience, and knowledge of its true instincts for its blind instincts; to adapt its government to time and place; to modify it according to circumstances and men: such is the first duty imposed on those who direct society in our day.[5]

The remainder the book can be interpreted as an attempt to accomplish this goal thereby giving advice to those people who would experience this change in social states.

Tocqueville begins his study of America by explaining the contribution of the Puritans. According to him, the Puritans established Americas democratic social state of equality. They arrived equals in education and were all middle class. In addition, Tocqueville observed that they contributed a synthesis of religion and political liberty in America that was uncommon in Europe, particularly in France. He calls the Puritan Founding the "seed" of his entire work.

Tocqueville believed that the Puritans established the principle of sovereignty of the people in the Fundamental Orders of Connecticut. The American Revolution then popularized this principle, followed by the Constitutional Convention of 1787, which developed institutions to manage popular will. While Tocqueville speaks highly of the America's Constitution, he believes that the mores, or "habits of mind" of the American people play a more prominent role in the protection of freedom.

Democracy in America was published in two volumes, the first in 1835 and the other in 1840. It was immediately popular in both Europe and the United States, while also having a profound impact on the French population. By the twentieth century, it had become a classic work of political science, social science, and history. It is a commonly assigned reading for undergraduates of American universities majoring in the political or social sciences, and part of the introductory political theory syllabus at Oxford and other institutions. In the introduction to his translation of the book, Harvey C. Mansfield called it "at once the best book ever written on democracy and the best book ever written on America.[6]

Tocqueville's work is often acclaimed for making a number of correct predictions. Tocqueville correctly anticipates the potential of the debate over the abolition of slavery to tear apart the United States (as it indeed did in the American Civil War) and the rise of the United States and Russia as rival superpowers, which they did become after World War II, with Russia as the central component of the Soviet Union. Noting the rise of the industrial sector in the American economy, some scholars have argued that Tocqueville also correctly predicted that an industrial aristocracy will rise from the ownership of labor, warning that '...friends of democracy must keep an anxious eye peeled in this direction at all times', saying further that the route of industry was the gate by which a new found wealthy class may potentially dominate. However, Tocqueville believed that an industrial aristocracy would differ from the formal aristocracy of the past. Tocqueville also explained the alienation and isolation that many have come to experience in modern life. On the other hand, Tocqueville notes that a democracy's equality of conditions stifles literary development, spending numerous chapters lamenting the state of the arts; written just prior to America's own literary Renaissance (due in large part to writers such as Edgar Allen Poe, Henry David Thoreau, Ralph Waldo Emerson, Herman Melville, Nathaniel Hawthorne and Walt Whitman). Also mentioning the employment of science for the sole purpose of streamlining production of material goods, he also failed to properly assess America's capabilities on the stage of scientific endeavor.

According to Tocqueville, democracy had some unfavorable consequences: the tyranny of the majority over thought, a preoccupation with material goods, and isolated individuals. Democracy in America predicted the violence of party spirit and the judgment of the wise subordinated to the prejudices of the ignorant.