The silk floss tree (Ceiba speciosa, formerly Chorisia speciosa), is a species of deciduous tree native to the tropical and subtropical forests of South America. It has a host of local common names, such as palo borracho (in Spanish literally "drunken stick"). It belongs to the same family as the baobab and the kapok. Another tree of the Ceiba genus, C. chodatii, often receives the same common names.

The natural habitat of the floss silk tree is the north-east of Argentina, Paraguay, Uruguay and southern Brazil. It is resistant to drought and moderate cold. It grows fast in spurts when water is abundant, and sometimes reaches more than 25 metres (82 ft) in height. Its trunk is bottle-shaped, generally bulging in its lower third, measuring up to 2 metres (7 ft) in girth. It is studded with thick conical prickles which serve to store water for dry times. In younger trees, the trunk is green due to its high chlorophyll content, which makes it capable of performing photosynthesis when leaves are absent; with age it turns to gray.

Detail of the thorny trunk

The branches tend to be horizontal and are also covered with prickles. The leaves are composed of five to seven long leaflets.

The flowers are creamy-whitish in the center and pink towards the tips of their five petals. They measure 10 to 15 centimetres (4 to 6 in) in diameter and their shape is superficially similar to hibiscus flowers. Their nectar is known to attract insects such as monarch butterflies, which perform pollination. C. speciosa flowers are in bloom between February and May. The flowers of the related C. chodatii are similar in form and size, but their color goes from creamy white centers to yellow tips.

The fruits are lignous ovoid pods, 20 centimetres (8 in) long, which contain bean-sized black seeds surrounded by a mass of fibrous, fluffy matter reminiscent of cotton or silk. 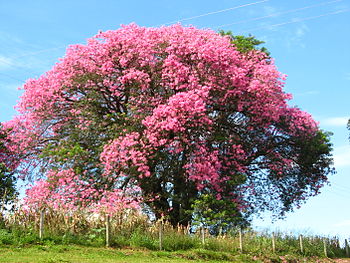 Flowered pink specimen, in a road at MOGI-MIRIM, near Sao Paulo, Brazil

An open fruit pod, displaying the silk-like fibers that give the tree its name, Silk Floss Tree.

The cotton inside the fruit pods, although not of as good quality as that of the kapok tree, has been used as stuffing f(density = 0.27 g/cm³), soft and flexible, and is employed in packaging, to make canoes, as wood pulp to make paper, and in ropes. From the seeds it is possible to obtain vegetable oil (both edible and industrially useful).

The floss silk tree is cultivated mostly for ornamental purposes. Outside of private gardens around the world, it is often planted along urban streets.

Ceiba speciosa is added to some versions of the hallucinogenic drink Ayahuasca.

The genus of Chorisia is difficult to propagate by cuttings or air layering, but is easily grafted. There are many forms worthy of propagating. Grafting is best performed in early spring just before bud break, but can be grafted any time during its growing season. Use scions made from the previous year's growth. A cleft graft, such as used with Avocado trees, is preferred.