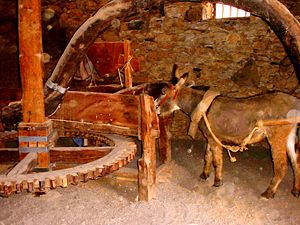 A horse mill is a mill that uses a horse as the power source. Any milling process can be powered in this way, but the most frequent use of animal power in horse mills was for grinding grain and pumping water. Other animals used for powering mills include dogs, donkeys and oxen. Engines powered by humans include treadwheels. Sometimes a horse mill was used in conjunction with a watermill or a windmill. These are all forms of animal engines.

In Antwerp, Belgium, the Brewers' House museum[1] is a good example of horse-powered pumping machinery. The building dates from the 16th century; although the original wooden machinery was replaced in cast iron in the mid-19th century, the original layout has been retained.

This horse mill has not been used since about 1830 when it was superseded by portable engines. It was rescued from Berwick Hills Low Farm in Northumberland by the museum, repaired and set up in their own gin gang at Home Farm as a non-functioning exhibit. The top of the mill's main vertical axle and the end of the main drive shaft are pivoted at the centre of their own separate tie beam which is below and parallel with the main roof tie beam, and set in the gin gang's side walls at either end. The mill's tie beam has to be stabilised with two massive oak beams which run, either side of the drive shaft, from tie beam to threshing barn wall. A large and basic engine like this can create great stresses from the torque engendered.[2]

This four-horse mill is based on a central, vertical, heavy, 10 feet (3.0 m) high, oak axle, with its base pivoting on an iron framework set in the middle of the gin gang floor. Its top end pivots under the mill's own tie beam (if it didn't, it would fall over) but the tie beam cannot rest on the pivot, or the mill would not turn. The main axle supports around its top end the main, 6 feet (1.8 m)-diameter, horizontal gear wheel, with the teeth on the top surface. The main drive shaft, a massive oak pole, is girthed at one end by a secondary gear wheel which lies on the main gear wheel, thus turning the main drive shaft on its long axis. The main drive shaft runs from the main gear wheel through a hole in the threshing barn wall and in the barn it powers the threshing machine and other machines via further cogwheels and belts. Such a machine would create great torque stresses, and if it were ever to work again it would require re-engineering to ensure smooth and safe running, and beams which are seasoned and not cracked.[2]

This is a powerful horse mill for four horses; probably English ponies, as modern heavy horses were not yet fully bred in the 1830s. Each of the four heavy oak beams connecting the central axle to the four horse shafts runs from beside the axle to the under-surface of the main gear wheel, and crosses the other three in a grid pattern between the axle and gear wheel, thus supporting the gear wheel and creating a rigid structure at the same time. They project for many feet beyond the main gear wheel, and require wooden stretchers to stabilise them. From the ends of these beams hang the horse shafts. The bottom ends of these shafts are quite low, which may indicate the use of ponies rather than early heavy horses.[2]

For locations of past and surviving horse mills, see List of Horse Mills.