Joseph Jacques Césaire Joffre OM (French pronunciation: [ʒɔsɛf ʒɔfʁ]; 12 January 1852 – 3 January 1931) was a French general during World War I. He is most known for regrouping the retreating allied armies to defeat the Germans at the strategically decisive First Battle of the Marne in 1914. His popularity led to his nickname Papa Joffre.

Joffre was born in Rivesaltes, Roussillon, the son of a family of vineyard owners. He entered the École Polytechnique in 1870 and became a career officer. He first saw active service during the Siege of Paris in the Franco-Prussian War, but spent much of his career in the colonies as a military engineer, serving with distinction in the Keelung Campaign during the Sino-French War (August 1884–April 1885). He returned to France and was made commander-in-chief of the French Army (1911), after Joseph Gallieni declined the post. With the revival of the army and a purge of "defensive-minded" officers[2] he adopted the strategy devised by Ferdinand Foch, the offensive known as Plan XVII. Joffre was selected to command despite never having commanded an Army, even on paper, and "having no knowledge whatever of General Staff work." [3]

At the outbreak of war, the French plan clashed with the German Schlieffen Plan, much to the detriment of the French. Joffre helped to retrieve the situation through retreat and counterattack at the First Battle of the Marne. He combined the French 9th and 10th armies into the French 6th army in under two weeks before turning it over to Joseph Gallieni in the First Battle of the Marne. His major positive contributions that won the Battle of the Marne were 1) his sustained calm under pressure and the calculated reasoning of an alumnus from Ecole Polytechnique 2) his ruthless dismissal of unsuccessful generals during the summer of 1914 (three army commanders, ten corps commanders and thirty-eight divisional commanders[4], replacing them with combative men like Foch, Franchet d'Esperey and - more junior at that stage - Petain and Nivelle) and 3) his outstanding logistical handling of French infantry divisional movements and artillery ammunition supplies during and after the French retreat of July 1914.

Following the enormous losses of the French offensives in Artois and Champagne in 1915, and after further losses at Verdun in 1916, where the Germans initially made good progress against fortifications which had had their guns removed for use elsewhere, Joffre's political position weakened. Early in 1916 he asked the British commander-in-chief Douglas Haig to put in a good word with the British Ambassador in Paris (Lord Bertie) so that it would get back to the French government[5]. Haig wanted to delay the Anglo-French offensive at the Somme until 15 August to allow for more training and more artillery to be available. When told of this Joffre shouted at Haig that “the French Army would cease to exist” and had to be calmed down with “liberal doses of 1840 brandy”. The British refused to agree to French demands for a joint Anglo-French offensive from the Salonika bridgehead. Eventually – perhaps influenced by reports of French troop disturbances at Verdun – Haig agreed to attack at the start of July. This was just in time, as it later turned out that Petain (commander at Verdun) was warning the French government that the “game was up” unless the British attacked[6]. After that battle Joffre was replaced by General Robert Nivelle on 13 December 1916.[2]

Still popular, Joffre was made Marshal of France, the first man to receive that rank under the Third Republic, but his role was little more than ceremonial.[2]

Following the catastrophic defeats of France's ally Romania at the hands of Central Powers in late 1916, that forced the capital Bucharest to be evacuated, Joffre was appointed as head of the French Military Mission aimed at reforming the Romanian army. He spent the first part of 1917 there. In June 1917, he was appointed head of the French military mission to the USA, then leader of the Supreme War Council in 1918.

In 1918, Mount Joffre in Western Canada was named after him. He retired in 1919 and was made a member of the Académie française.

In 1920 Joffre presided over the Jocs Florals in Barcelona, a Catalan literary certamen. He died on 3 January 1931 in Paris and was buried on his estate in Louveciennes. His memoirs, in two volumes, were published posthumously in 1932.

The statue in Place Joffre, Paris, before the École Militaire 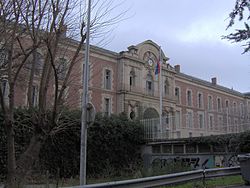 The Joffre class of steam locomotives was a French Decauville design built by Kerr Stuart under contract during 1915 and 1916.

A French aircraft carrier bearing Joffre's name was under construction at the start of World War II but was never completed due to France's rapid fall in 1940.

The Joffre cake is named after him.

The following landmarks were named in Joffre's honor: