La Malinche mountain, also known as Matlalcuéyetl, Matlalcueitl or Malintzin, is an inactive volcano (dormant for the last 3,100 years) located in Tlaxcala and Puebla states, in Mexico. Officially, its summit reaches 4,461 metres (14,636 ft) above sea level, though in some articles it is considered to be 4,503 m (as measured by GPS). Its height makes it the highest peak in Tlaxcala, the fifth highest in Puebla, the sixth highest in Mexico, and the 252nd highest in the world. Its height above nearby cities varies from 1,908 metres above Huamantla, 2461 metres above Villa Vicente Guerrero, 2,221 metres above Tlaxcala to 2,299 metres above Puebla. The summit is 22.4 km from Tlaxcala, 28.3 km from Puebla, and 118 km from Mexico City. The climate is cold on the summit and mild on its lower slopes.

The Tlaxcaltecs named it Matlalcuéyetl, which in English means "Lady of the Green Skirts," a goddess of rain and song. The Spanish changed its name to "Malintzin" and/or "Malinche", in honor of a woman from the current Tabasco state, called Malinalli, who helped the Spanish as a translator.

La Malinche mountain, also called Malintzi by the locals, is an inactive stratovolcano which began to form in the middle of the Paleogene period, 30-35 million years ago. Since that time it has grown through eruptions, some violent and some gentle. The last eruption is believed to have occurred 3100 years ago.[1] This volcano is a cone with extensive slopes. At the foot of this mountain are some other summits, like Xaltonele peak, Xalapaxco crater and the 450 metre Cuatlapanga; the latter is a famous summit. At present, La Malinche is apparently quiet, although some "strange noises" have been reported by local residents. On lower slopes are farmlands which grow mostly field "dent" corn and forests which transition from oak to oyamel with increasing elevation. The upper slopes are grasslands. The summit is covered by snow part of the year and is considered to be the coldest location in Tlaxcala. On the lower slopes the climate is mild year round, but rainy during the summer months. The soils consist of crushed volcanic rock and sand with an underlying layer of clay and sand called tepetate at an average depth of about a meter. The dark and porous forest soils were formed from volcanic ash. From La Malinche streams flow in all directions forming small gorges in places which fill and run rapidly when torrential rains occur. At the base of the mountain emerge many springs, some of drinkable water, and others of thermal water heated in the volcano's interior. 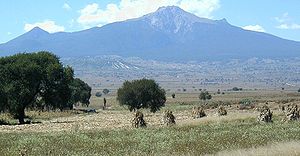 La Malinche or Matlalcueitl viewed from the northeast

La Malinche shares, like Popocatépetl and Iztaccihuatl, legends about their formation. According to the most famous legend, Matlalcueyetls was a virgin girl engaged to Cuatlapanga, a warrior who had to go to a battle in a remote place. Time went of, and the lover took so long in coming back; so the sad girl died by sorrow. When the warrior came back, he was looking for her, but then he received the bad news. He went to cry at the feet of her grave, but he also died, becoming in a short mountain. La Malinche also became in stone, but in the huge volcano, with Cuatlapanga at its hillside.

The park offers a 'resort' area at 3000 m (9800 ft) - "Centro Vacacional Malintzín" - with very comfortable cabins and camping. It is an ideal location to acclimatize and start an ascent of the volcano. There is a basketball and volleyball court, two restaurants, a gift shop and several small shops with basic snacks and drinks. The access road passes the resort area and continues partway up the mountain, switchbacking most of the way. A hiking trail to the summit begins at the resort area, cutting across the road switchbacks for the first section.

The peak is quite high at 4460 m (14635 ft), so anyone from low altitude will notice the affects of altitude including heavier breathing. It is often cold at the top, so proper clothing is recommended. The ascent is challenging but not technical - the trail can be hiked easily to the summit. Fit hikers can reach the summit from the Centro in 3–4 hours, but it's best to plan for 5–6 hours with breaks. It is best to start in the early morning and return well before sunset. As you would expect, the view from the top is breathtaking, and there are several picturesque places to rest on the way up.