The Phantom Tollbooth is a children's adventure novel and modern fairy tale published in 1961, written by Norton Juster and illustrated by Jules Feiffer. It tells the story of a bored young boy named Milo who unexpectedly receives a magic tollbooth one afternoon and, having nothing better to do, decides to drive through it in his toy car. The tollbooth transports him to a land called the Kingdom of Wisdom. There he acquires two faithful companions, has many adventures, and goes on a quest to rescue the princesses of the kingdom, Princess Rhyme and Princess Reason. The text is full of puns, and many events, such as Milo's jump to the Island of Conclusions, exemplify literal meanings of English language idioms.

Juster claims his father's fondness for puns and The Marx Brothers' movies were a major influence.[1] The Phantom Tollbooth achieved "instant classic" status upon publication. Critics have compared its appeal to that of Lewis Carroll's Alice's Adventures in Wonderland.

The book has been translated into several languages.[2] 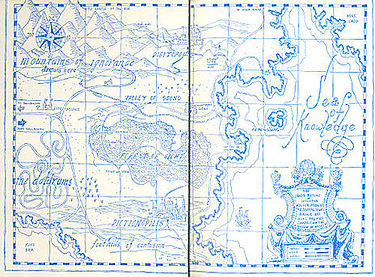 Map drawn by Jules Feiffer to illustrate the book.

Milo is a boy bored by the world around him; every activity seems a waste of time. He arrives home from school one day to find in his bedroom a mysterious package that contains a miniature tollbooth and a map of "the Lands Beyond". Attached is a note, "FOR MILO, WHO HAS PLENTY OF TIME". He assembles the tollbooth, takes the map, drives through the tollbooth in his toy car, and instantly finds himself on a road to Expectations. Enjoying the ride, and stopping shortly to speak with the Whether Man, he pays no attention to his route and soon becomes lost in the Doldrums, a colorless place where thinking and laughing are not allowed. However, he is found there and rescued by Tock, a "watchdog" with an alarm clock attached to him, who joins him on his journey.

Their first stop is Dictionopolis, one of two capital cities of the Kingdom of Wisdom. They visit the word marketplace, where all the world's words and letters are bought and sold. After an altercation between the Spelling Bee and the blustering Humbug, Milo and Tock are arrested by the very short Officer Shrift. In prison, Milo learns the history of Wisdom. Its two rulers, King Azaz the Unabridged and the Mathemagician, had two adopted younger sisters, Rhyme and Reason, who had settled all disputes in the kingdom. Everyone lived in harmony until the rulers disagreed with the princesses' decision that letters and numbers were equally important. They banished the princesses to the Castle in the Air, and since then, the kingdom has been plagued with discord and disharmony.

Because Officer Shrift cares only to put people in prison, not to keep them there, Milo and Tock leave the dungeon and attend a banquet given by King Azaz, where the guests literally eat their words. King Azaz allows Milo and the Humbug to talk themselves into a quest to rescue the princesses. Azaz appoints the Humbug as a guide, and he, Milo and Tock set off for the Mathemagician's capital of Digitopolis to obtain his approval for their quest.

Along the way they meet such characters as Alec Bings, a little boy who sees through things and grows until he reaches the ground, and have adventures like watching Chroma the Great conduct his orchestra in playing the colors of the sunset.

In Digitopolis, their first stop is the mine where numbers are dug out and precious stones are thrown away. They eat subtraction stew, which makes the diner hungrier. The Mathemagician erases the mine with his magic pencil eraser, he and Milo discuss Infinity, and Milo proves to the Mathemagician that he must allow them to rescue the princesses.

In the Mountains of Ignorance, the three intrepid journeyers contend with lurking, obstructionist demons like the Terrible Trivium and the Senses Taker. Milo thwarts them from stopping his quest by using gifts he received in Wisdom. After overcoming various obstacles and their own fears, the questers reach the Castle in the Air. The two princesses welcome Milo and agree to return to Wisdom. When the group leaves, Tock carries them through the sky because, after all, time flies. The demons chase them, but the armies of Wisdom, (made up of troopers, horseback cavalry,swordsmen, archers, snipers, marines, soldiers with 1960 guns and many more) repulse them. The armies of Wisdom welcome the princesses home, King Azaz and the Mathemagician are reconciled, and all enjoy a three-day carnival celebration of the return of Rhyme and Reason.

Milo says goodbye and drives off, feeling he has been away several weeks. Ahead in the road he spots the tollbooth and drives through. Suddenly he is back in his own room, and discovers he has been gone only an hour.

He awakens the next day full of plans to return to Wisdom, but when he returns from school the tollbooth has vanished. A new note has arrived, addressed, "FOR MILO, WHO NOW KNOWS THE WAY." Milo is disappointed and hopes the tollbooth will return to him some day. However, he looks around him and finds that the world is now beautiful and interesting.

Critics have acknowledged that the book is advanced for most children, who would not understand all the wordplay or the framing metaphor of the achievement of wisdom.[3][4] Writers like the reviewer in The New York Times have focused on the children and adults able to appreciate it; for them, it has "something wonderful for anybody old enough to relish the allegorical wisdom of Alice in Wonderland and the pointed whimsy of The Wizard of Oz".[5] It is now acknowledged as a classic of children’s literature.[6]