"One Time" is the debut song of Canadian recording artist Justin Bieber. The song was produced and written by RedZone Entertainment's Christopher "Tricky" Stewart, Terius "The-Dream" Nash, and Kuk Harrell and production duo The Movement. It is the first single released from his debut EP, My World. It was first solicited to mainstream and rhythmic radio on May 18, 2009. It was released via digital download in the United States and Canada on July 7, 2009, and was released in several other countries during autumn 2009. An acoustic version of the song, called the "My Heart Edition" was released to iTunes on December 22, 2009. The song, moderately paced with R&B, pop, and hip-hop influences, is an ode to young love.

The song received positive reviews from critics, commending its production, vocals and quality of lyrics. The song was a commercial success, reaching the top twenty in Canada, US, Germany, United Kingdom, France and New Zealand and also charted in several other countries. The single has been certified Platinum in Canada and the United States. The accompanying music video portrays Bieber at a house party, and features his mentor, Usher and hometown friend, Ryan Butler. As of January 2010, the video had been viewed over 100 million times on the internet. The video is now the fifth most viewed video in YouTube history. Bieber performed the song in a number of live appearances including The Dome, The Next Star, and Dick Clark's New Year's Rockin' Eve with Ryan Seacrest.

The song was written for Bieber by veteran American hip-hop/R&B producers Christopher "Tricky" Stewart. Terius "The-Dream" Nash, and Kuk Harrell for their RedZone Entertainment, as his debut single.[1][2] Before they produced and wrote Bieber's debut they had recently did hits such as Beyoncé's "Single Ladies (Put A Ring On It)", Mariah Carey's "Obsessed", Fabolous's "Throw It In the Bag" and more. "One Time" was produced by Stewart and production duo The Movement, while Harrell provided vocal mixing.[3] The Movement also received writing credits for the song as did Thabiso Nkhereanye. Bieber recorded the song at RedZone's Triangle Sound Studios in Savannah, Georgia a few hours away from Bieber's current home of Atlanta, Georgia. Bieber also recorded some of the track at The Boom Boom Room in Burbank, California. Mixing was done in Atlanta at Silent Sound Studios by Dave Pensado and Jaycen-Joshua Fowler.[4]

"One Time" is described to be in a "moderately slow groove".[5] Washington Post called the track, along with 'Love Me' "modest club tracks."[6] About.com described it as a "solid midtempo beat."[1] The song is composed in the key of C♯ minor.[5] The song is moderately paced, and the introduction and outro are sung in a sing-and-tell format with Bieber repetitively voicing the line "Me plus you/Imma tell you one time." The verses are sung with backing R&B infused bass beats with a light string background in the same moderate pace before the bridge prepares for the refrain through the lines "Your world is my world/My fight is your fight/My breath is your breath/And your heart."[3] Bieber goes into the middle eight the backing is not as much indistinguishable from the rest of the song, but is delivered a little slower leading up to the chorus and outro.

Bill Lamb of About.com called the song a "perfect kickoff to the career of Justin Bieber", noting the song had an effect of a younger Chris Brown, commended the production of The-Dream and Tricky Stewart for making the single contemporary and commercial. However Lamb criticized the song for being too "generic", and that Bieber had little room to show his voice.[1] Billboard's Michael Menachem called the song "a hallmark pop song that also taps into a prevalent teen hip-hop aesthetic". He also compared Bieber to Brown on the track, and said that "[Bieber's] tenor brings to mind [Brown's] vocal debut on "Run It!" in 2005, when he, too, was 15 and on the cusp of stardom". Unlike Lamb, Menachem said the song gave Bieber's vocals plenty of room to shine as he confidently breaks into the chorus.[3] Leah Greenblat of Entertainment Weekly named the song one of the hottest songs of fall of 2009, saying that Bieber's "pop-soul bonafides with this refreshingly age-appropriate chronicle of young love."[7]

The song entered at number ninety-five on the Billboard Hot 100 for the week of July 25, 2009. The song stayed on the chart for nearly six months before eventually peaking at number seventeen on the chart.[8] Although the song didn't gain momentum until the near end of 2009, it managed to chart at number eighty-nine on the 2009 Billboard Year-End Hot 100, and eighty-one on the Year-End Canadian Hot 100.[9] It was also number seventy-five on the Year End Hot Digital Singles.[9] After lying dormant outside the top twenty for a few weeks, on the week labeled January 9, 2010, due to the release of "One Time: My Heart Edition" on iTunes, and increased sales of My World, the song made a thirty spot jump from forty-seven to number seventeen, reaching a new peak on the chart.[10] The song debuted on the Billboard Pop chart at number eighty-four as the highest debut of the week. It has since peaked at number fourteen.[11][12] It reached number twelve in Canada, where it remained on the chart for twenty consecutive weeks.[13] The single was certified Platinum in Canada by CRIA in September 2009.[14] It was certified Platinum by the RIAA in the United States in January 2010, selling over a million copies.[15] As of February 2011, the single was sold 2,132,000 times.[16]

The song has also achieved international success. It debuted in Belgium (Flanders) at twenty-six and peaked at twelve on the bubbling under chart, equivalent to peaking at sixty-two on the main chart.[17] It debuted on the Belgium (Wallonia) tip chart at twenty-six in its first week, the week ending January 16, 2010, and has since peaked at six, equivalent to peaking at forty-four on the main chart.[17] The song debuted in Austria at seventy-one on the week of September 4, 2009, and peaked at thirty, remaining on the chart for eleven weeks.[18] "One Time" debuted at fourteen in Germany, which became its peak position on the chart.[19] The song debuted in Australia at number eighty-two[20] and later reached a peak of twenty-three.[21] In Ireland the song debuted at forty-five on the Irish Singles Chart.[22] It has since peaked at thirty-one on the chart.[22] The song debuted on the UK Singles Chart at 135, and jumped to fourteen on January 10, 2010.[23][24] A week later on January 17, 2010, the song jumped again to number eleven, just missing out on the top ten.[24] The song peaked at number six in New Zealand, and at thirteen in France.[25][26] 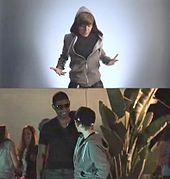 Bieber featured in front of the gray-azure backdrop and in the pool scene with Usher in the video.

The music video, directed by Vashtie Kola, was posted by Bieber on his YouTube channel on June 13, 2009, almost a month before the single was released to iTunes.[27] Bieber's mentor, Usher and one of his closest friends, Ryan Butler make appearances in the video.[28] It features Bieber clad in a grey hooded sweatshirt grinning mischievously into the camera.[29] As of January 2010, the video had been viewed over 100 millon times on the internet.[30] Bieber made a comment stating "It was really cool going from my webcam to professional videos".[29] In a review of the video Entertainment Weekly's Leah Greenblat said: "Bieber does seem to share many of the qualities that made his idols the pop/R&B superstars they've become, including a clear, supple voice, pinup-boy looks, and bona fide instrument skills".[28]

In the music video, Usher, Bieber and Butler all portray themselves as the latter two are at Usher's house playing video games. Bieber receives a phone call from Usher, in which he asks him if could he watch the house until he gets back. After agreeing, Bieber holds a house party and tries to get close to one girl in particular, played by Kristen Rodeheaver, but is disappointed because he thought they were bonding but at the end of the video when they are sitting together at the pool, she kisses him on the cheek, then leaves. He then stands up and gets caught by Usher.

Bieber performing an acoustic rendition of "One Time" at the Nintendo World Store.

Bieber is performing the song currently on his promotional tour throughout the United States. Internationally, he appeared on the European program The Dome and performed "One Time". As far as televised performances go, he performed "One Time" on MTV's VMA Tour to precede the 2009 MTV Video Music Awards, September 26, 2009, on YTV's The Next Star, and on the Today Show.[14][31][32] He also performed the song on The Ellen DeGeneres Show on November 3, 2009; Good Morning America on November 15, 2009; Lopez Tonight on November 17, 2009, and The Wendy Williams Show on November 27, 2009. The song was Bieber's ending number while on his two-show stint as an opening act for Taylor Swift's Fearless Tour. On November 23, 2009, while performing in London on the tour, Bieber fractured his foot at the beginning of performing this song during a London concert, but continued to perform/limp the rest of the song.[33] He was able to perform on stage the next night in Manchester, with a cast and limited dancing.[33] After the televised appearances, the Urban Behavior Tour, and Fearless Tour, Bieber traveled in Europe to promote the album before returning to the US to resume his promotional tour. Bieber performed the song in Las Vegas for Dick Clark's New Year's Rockin' Eve with Ryan Seacrest on December 31, 2009.[34] While promoting the album in the United Kingdom, Bieber performed an acoustic rendition of "One Time" and a drum solo on BBC's Blue Peter on January 12, 2010. He performed it on CBS' The Early Show as a part of their 2010 Super Bowl programming.[35] Bieber performed the song at a concert at the Hollywood Palladium, and August Brown of the Los Angeles Times commented, "'One Time', helmed by white-hot producer Christopher 'Tricky' Stewart, is an endearing, swaggering little thing in which Bieber convincingly jumps from Usher’s rapid-fire runs to pristine pop harmonies."[36]

Originally, an acoustic version of "One Time" was set to be released on iTunes on October 27, 2009. However plans were changed, and a week before the release, Bieber announced that a new song, "Love Me" would be released.[37] Bieber later on announced on December 19, 2009, that an "exclusive unplugged Christmas [sic] version" of "One Time" would be released to iTunes the following Tuesday.[38] The song was released a day early on December 21, 2009. The cover art for the single features a still from the music video from "One Less Lonely Girl". Kyle Anderson of MTV stated that the song "strips away the original track's synths and technology and leaves only Bieber's able voice".[39] Bieber performed the acoustic version of the song when he guest starred on True Jackson, VP, during a live session with MTV, and on Blue Peter. It is featured on the Radio Disney Jams, Vol. 12 album.[39]