A parliamentary election to both the Senate and the Sejm (lower house) was held in Poland on 9 October 2011. The previous election, in 2007, resulted in a Civic Platform–Polish People's Party government. All seats of both Houses were up for re-election.

Prime Minister Donald Tusk's Civic Platform (PO) won a plurality of seats and Tusk could become the first Polish prime minister to be appointed for a second term since the fall of communism. The Polish People's Party (PSL), who had previously been the junior partner in the governing coalition, said that it wished to continue with the coalition agreement after the election.[1]

The election was for all 460 seats of the Sejm and all 100 seats of the Senate. Candidates for Deputies are nominated either by the electoral committees of the various political parties and or by individual voter committees.[2] The process of election for the Sejm is through party-list proportional representation via the D'hondt method in multi-seat constituencies (41 in total),[3] with a 5% threshold for single parties and 8% threshold for coalitions (requirements waived for national minorities).[citation needed]

The election was the first one to take place under a new Election Code which altered the electoral system in the Senate election from a plurality block voting to the first-past-the-post voting, with one member to be returned in each of the 100 single member constituencies.[4][non-primary source needed] 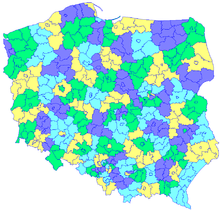 The date of the election, October 9, was set by the President of Poland, Bronisław Komorowski,[6] and announced on 4 July. The latest possible date for the election to be held was 30 October 2011,[6] four years after the previous election. Prior to the announcement of the election date, the most likely dates were thought to be 16 October or 23 October.[7]

Although the governing coalition has a strong majority, it was suggested that the elections be brought forward to the spring,[8] to avoid the campaign interrupting Poland's Presidency of the Council of the European Union in the second half of the year. The idea was supported by the Democratic Left Alliance and Poland Comes First, but firmly opposed by Law and Justice.[9] The Marshal of the Sejm, PO's Grzegorz Schetyna, said that he didn't believe that early elections would take place.[10]

The Civic Platform favoured an election date of 23 October.[11] Since the State Electoral Commission decided that 30 October falls too close to the national holiday of All Saints,[12] and elections are always held on Sundays, 23 October was the latest possible date to hold the election. In the end, Komorowski decided on 9 October.[citation needed]

Civic Platform (PO), the largest governing party under prime minister Donald Tusk, was seeking reelection. Opinion polls over the past four years had fairly consistently shown the PO to have the largest level of popular support among Poland's political parties. A strong result for PO could deliver it majority government in its own right. Alternatively, had PO failed to win a majority, they may have sought a coalition with the Polish People's Party (PSL), or possibly even with the Democratic Left Alliance (SLD).

Law and Justice Law and Justice (PiS), is Poland's second largest party as of 2007, and was the leading party of government from 2005–2007. PiS's greatest difficulty this election, was not only that it trailed PO in popular support, but that even if it were to outpoll the PO, it might have had difficulty in finding other parties willing to enter into a coalition with it. Jarosław Kaczyński had publicly denied the possibility of allying his party with the post-communist SLD and relations with the PSL (traditionally viewed by the media as an opportunist coalition partner, ready to form a coalition with everyone) have remained tense, especially since Adam Hofman's recent statement in which he attacked PSL members in an abusive manner following the airing of the People's Party newest electoral TV spot. A grand coalition of PiS with PO was a very unlikely possibility, given the mutual animosity of these two large entities.

Democratic Left Alliance Poland's strongest left-wing party, the Democratic Left Alliance (SLD) had struggled since 2005 to regain its position as one of the countries two largest parties. A strong vote for SLD at this election or a poor showing for PSL (PO's most likely coalition partner) could have forced the PO to seek SLD out as a coalition partner, had that need arisen.

Polish People's Party The Polish People's Party (PSL) is an agrarian-rooted part. It was the minority partner in a coalition government with PO.[13] Although some opinion polls showed popular support for PSL to be dangerously close to the 5% electoral threshold, PSL generally performed a little better than opinion polls indicate. It is widely seen as a coalition partner for every party that happens to need such.

Poland Comes First A new party on the Polish political scene, Poland Comes First (PJN), emerged as a splinter group from PiS, following the Polish presidential election, 2010. PJN's future parliamentary representation was uncertain, given that most opinion polls show support levels for PJN to be below the 5% electoral threshold. The party had suffered an almost constant internal crisis since its very foundation that led many of its MPs to leave it for the other parties in Parliament, including the most famous one, chairwoman Joanna Kluzik-Rostkowska, who joined the PO. Commentators argue that the PJN failed to establish itself as a real alternative on the political scene, being widely perceived as nothing but a milder variant of the party it had once left.

Palikot's Movement Palikot's Movement (Ruch Palikota), officially the Movement of Support (Ruch Poparcia, RP), is a breakaway faction of the PO that followed MP Janusz Palikot after he had been expelled from the party for his "scandalous" remarks on late President Lech Kaczyński. Like the PJN, the Movement is seen as one of the six parties that, based on the recent polls' results, have a factual chance of entering Parliament. The RP is distinctive on Poland's political scene in that it is the first party in the country's history that puts strong emphasis on its program's anticlerical features (the usual practice being that parties either try to win the Church's unofficial support or at least do not try to appear anti-Church) along with appeals for putting an end to the anti-abortion policy and introducing civil unions for same-sex couples. In terms of economy, the RP blends leftist[dubious – discuss] and rightist ideas.

Other parties The only other party contesting all 41 electoral districts for the Sejm in 2011, was the Polish Labour Party (PPP). The remaining parties include Congress of the New Right (KNP) (21 districts), Right of the Republic (PR) (20 districts), Our Homeland Poland (NDP) (9 districts) and German Minority group (MN) (1 district). With the exception of the German Minority group (which as an ethnic minority party is exempt from the 5% election threshold requirement), these parties were not expected to poll the required 5% to enter the Sejm. Some other minor parties, had decided not to contest the elections independently, opting instead to negotiate a place for their candidates on the electoral lists of the larger parties. These parties may still manage to have some of their candidates elected in this way.

Tusk campaigned on a platform that drew on the record of its economic success during the previous government. He also said that he would pursue a "steady rapprochement" with Russia, in spite of prior rows over missile defence, gas pipelines and the inquiry into the plane crash that killed Poland's former president in 2010. Conversely the Law and Justice Party had been distrustful of Russia and Germany.[13]

Various delegations from the electoral boards and of political party representatives from Tunisia, Egypt and Libya, due to hold their own free elections in the coming months, monitored the election in Warsaw, Radom and Płock at the invitations of the Foreign Ministry, as Deputy Foreign Minister Krzysztof Stanowski said that "I hope the climax of our help comes when [the countries’ policymakers] begin discussing the constitution, reforms in economy and local government." Rania Mbarki, from a local election commission in Tunis, said that "it’s obligatory to stand in the voting booth before putting pen to paper. Here, the ballot papers are marked on tables with families around. There is a discussion. In our country it’s confidential, we can’t say what we have chosen, you can’t show what you have chosen, so this is different for us;" while Mounira Belghouthi, from a local election board in Kairouan, added that the advanced voting machines were more technologically advanced than in Tunisia and they sought to get an idea its usage.[14]

Opinion polls in the Polish parliamentary election, 2011 were first recorded on 16 May, 2010 and culminated before election day on 9 October. The two largest parties, Civic Platform and the Law and Justice Party, reported significant declines in favourability; however, the former's breakaway Palikot Movement recorded a stellar rise, with little changes for the others. 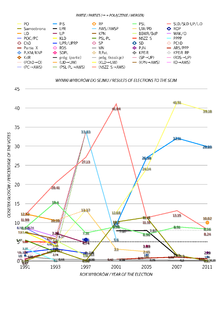 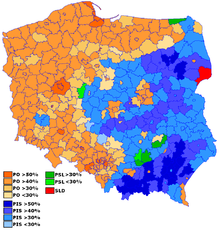 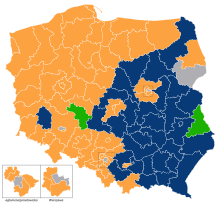 The Civic Platform party won a plurality with 207 seats in the Sejm, followed by the Law and Justice Party with 157 seats. The breakaway Palikot Movement won 40 seats and the second biggest incumbent coalition party, the Polish People's Party, won 28 seats. The Democratic Left Alliance got 27 seats.[13] In the Senate, Civic Platform won an absolute majority with 63 seats, while Law & Justice came away with 31. The only other party to achieve Senate representation was the Polish People's Party, which won 2 seats. Four independents were also elected.[17]

Civic Platform's Donald Tusk said of the victory that: "It is the highest honour for me and for Civic Platform that we will be working for the next four years for all of you, regardless of who you voted for today. In the next four years we will work twice as hard."[13] The Law and Justice Party's Jaroslaw Kaczynski conceded defeat.[18] Polish financial markets reacted positively to the outcome, while the zloty rose.[19]

Bloomberg said of the victory for Civic Platform that, as Poland was the only EU country to avoid a recession in 2009, it could continue with its economic initiatives such as consolidating the budget with an expected shortfall and also to avoid austerity measures that many other EU countries have been forced to endure. It also added that the success of the breakaway Palikot movement, coupled with the People Party's reluctance to support some policies, could provide a counterweight to keeping Civic Platform from getting complacent.[20]

Following Civic Platform's victory, Tusk said that his party's coalition alliance with the smaller Polish People's Party would continue.[18] Tusk also declared that his ministry would remain unchanged for the remainder of the year, citing the fact that this was the preferable course of action given Poland's presidency of the EU, which continues to the end of the year. [21]