Occupation of Estonia by the German Empire 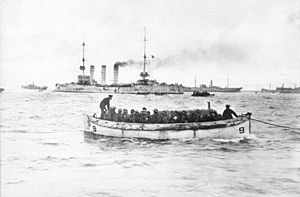 The occupation of Estonia by the German Empire occurred during the later stages of the First World War. On October 11–21, 1917, when the Imperial German Army occupied the West Estonian archipelago (Moonsund archipelago), consisting of the islands of Saaremaa (Ösel), Hiiumaa (Dagö), and Muhu (Mühn). To put on the pressure against the new Bolshevik regime of Soviet Russia to sign the Treaty of Brest-Litowsk the Germans landed on the mainland of Estonia on February 18, 1918 and marched in Haapsalu (Hapsal) on February 21, 1918. The Germans occupied Valga (Walk) on February 22, Pärnu (Pernau), Viljandi (Fellin), Tartu (Dorpat) on February 24. Tallinn (Revel), was occupied on February 25, 1918 and the rest of Estonia, last town taken being Narva, on March 4, 1918, putting an end to both the republican regime which had declared Estonia's independence on February 24, 1918 at Tallinn, and the rule of local Russian-Estonian Red Guards. The last Red Guards escaped over River Narva on March 5, 1918. Lieutenant General Adolf von Seckendorff arrived in Tallinn (Revel) on February 28, 1918. He had acted as Military Commander of Third Kommandatur at the head of the German military administration of the West Estonian archipelago. In 1918 Estonia became part of the German Ober Ost military administration for Curonia, Estonia, Livonia, Ösel, and Riga.

Between retreating Russian and advancing German troops, the Occupation of Estonia by the German Empire approaching, the Salvation Committee of the Estonian National Council, Maapäev, declared the independence of Estonia on 24 February 1918. However, the German forces did not recognise the independence.

On March 23, 1918 the Commander of German 68th Corps declared the just formed Estonian Army illegal. The arrests of the leaders of the national independence movement started in June 1918. The elected head of state Konstantin Päts was sent to Germany to be kept in prison. During this whole period the Estonian Salvation Committee continued its underground activities, entering into relation with the Western Allied powers. Great Britain recognised Estonian independence (de facto) on May 3, 1918, followed by France on May 18, and Italy on May 29, 1918, giving the committee a legal status of the representative of the Estonian nation.

After the German Revolution, between 11 and 14 November 1918 the representatives of Germany formally handed over political power in Estonia to the national government. The Russian Bolshevik invasion and The Estonian War of Independence followed. On 2 February 1920, the Peace Treaty of Tartu was signed by the Republic of Estonia and Bolshevist Russia. The Republic of Estonia obtained international recognition and became a member of the League of Nations in 1921.

The Baltic German minority tried to found the United Baltic Duchy. When signing the Treaty of Brest-Litowsk on March 3, 1918 Soviet Russia formally transferred Estonia to German military administration, its future status having to be determined later.

On April 12, 1918 the German Balts assembled Landesversammlung at Riga asking the forming of United Duchy of Estland, Livland and Kurland to be incorporated to Imperial Germany in personal union with Hohenzollern family, a request presented by the Landesrat in Riga to the Emperor of Germany.

Tallinn, Tartu, and Narva were placed direct under the German military administration (Ober Ost), but the rest of the country were divided and administrated as Amtsbezirgs and smaller Ortsbezirgs. Usually representatives of the Baltic nobility (Baltic German feudal landowners) were appointed as local heads of administration. All Estonian language newspapers, except the German minded Rewaler Tagesblatt / Tallinna Päevaleht were forbidden. This situation lasted until November 10, 1918. Germany denounced the Treaty of Brest-Litovsk with all its (then secret) additional protocols on 5 November 1918. August Winnig, the last German representative in Estonia signed the treaty with the Estonian Provisional Government on November 19, 1918 giving all the administration power to the Estonian Provisional Government. Soviet Russia invaded Estonia on November 28, 1918, starting the Estonian War of Independence.

Head of the Administration Verwaltungschefs

(for the West Estonian archipelago (Moonsund archipelago), Ösel being the German name for Saaremaa, the major island)

Head of the Military Administration Verwaltungschefs