Plan of the Defence lines of the Swiss National Redoubt

The Swiss National Redoubt (Schweizer Alpenfestung or Réduit suisse) was a defensive plan developed by the Swiss government beginning in the 1880s to respond to foreign invasion. In the opening years of World War II the plan was expanded and refined to deal with a potential German invasion. The German plan, Operation Tannenbaum, was real, but was never carried out. The National Redoubt primarily refers to the fortifications begun in the 1880s that secured the mountainous central part of Switzerland, providing a defended refuge for a retreating Swiss army. The National Redoubt encompassed a widely distributed set of fortifications on a general east-west line through the Alps, centering on three major fortress complexes, Fortresses St. Maurice, St. Gotthard and Sargans. These fortresses primarily defended the alpine crossings between Germany and Italy and excluded the industrialized and populated heart of Switzerland. The Swiss heartlands were defended by the Border Line, an advanced line of defenses near the borders, and the Army Position somewhat farther back. While not intended as an impassable barrier, these lines contained some significant fortifications. The National Redoubt, however, was planned as a nearly impregnable complex of fortifications that would deny an aggressor passage over or through the Alps by controlling the major passes and the railroad tunnels running north-to-south through the region. This strategy was intended to deter an invasion altogether by denying Switzerland's crucial transportation infrastructure to an aggressor.

Réduit in the Swiss Alps 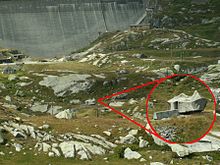 Camouflaged cannon at the Lucendro dam in the Gotthard region. It has a 105 mm calibre and fires up to range of 17 km.

Fortification of the Swiss alpine region began in the 1880s, shortly after the opening of the Gotthard railway. Forts similar to those of Belgian military engineer Henri Alexis Brialmont were built at Airolo, the Oberalp Pass, Furka Pass and Grimsel Pass, all in the central Alps. Additional positions were constructed in the area of Saint-Maurice, using mining and tunneling techniques in the steep mountainsides of the glacial valley.[1]

Following World War I, there was little Swiss interest in further fortifications. However, during the 1930s as France built the Maginot Line from the Mediterranean to Belgium and Czechoslovakia built the Czechoslovak border fortifications, Switzerland re-examined its need for fixed defenses. At the same time, job creation programs became desirable as a result of the worldwide Great Depression.[2] By 1935 design work began, and in 1937 construction began on the expanded Alpine fortifications, the Border Line and the Army line fortifications.[3]

General Henri Guisan developed a strategy for the defense of Switzerland that recognized Switzerland's limited resources in equipment and manpower compared to its potential adversaries. Guisan proposed a delaying strategy in the broken terrain of the borders to keep an invading force out of the open country in the central plateau for as long as possible, allowing an orderly retreat to the secured Alpine perimeter. Once the retreat to the Alps was complete, the Swiss government could remain in being for an extended time. Accordingly, the border fortifications were improved with major programs along the Rhine and at Vallorbe in the Jura. The strategic Alpine nodes of Saint-Maurice, Saint Gotthard and Sargans were identified as the primary points of access to the Alpine redoubt for a potential aggressor. While Saint Gotthard and Saint-Maurice had been previously fortified, the area of Sargans was newly vulnerable, owing to a drainage program of former wetlands along the Rhine that would now provide easy access to the eastern Alpine gateway at Sargans.[2]

Debate continued over the extent of the Redoubt under the Guisan plan. A proposal was developed by officers from German-speaking cantons, advocating a more compact redoubt. This was overcome by a proposal, authored by Guisan's chief of staff, Colonel Samuel Gonard, whose plan ratified the Saint-Maurice - Saint Gotthard - Sargans strategy, prefaced by a defense in depth. Additional impetus was provided by the fall of France in June, 1940. Two days after the French surrender, on 23 June, the border zones were reduced in priority in favor of the "advanced position" or Army Line. The army was shifted to the center of the country, leaving industries and population centers relatively unprotected. The final Guisan plan, adopted on 12 July 1940, defined an organized retreat to the Alps, where supplies would be stocked for an indefinite resistance with no thought of further retreat. On 25 July 1940, the Swiss defensive plan was disseminated, dictating a fallback to the Alps in the event of an Axis attack, focusing in particular on the Gotthard massif and destroying all access points as necessary once inside.[4]

The National Redoubt strategy was emphasized on 24 May 1941. Until this time only about two thirds of the Swiss Army had been mobilized. Following the swift overrunning of the Balkan countries by German forces in April 1941, in which relatively low mountains had proven to be little barrier to the aggressive German forces, the entire Swiss army was mobilized. The Swiss, lacking a significant armored force, drew the conclusion that withdrawal to the Redoubt was the only sound course. Any actions in the Central Plateau would be delaying actions only. This was publicly reported after Switzerland was surrounded by German and Italian forces, Guisan revealed on 25 July 1940 at the so-called Rütlirapport, a meeting of the Swiss army staff at the founding site of the Swiss confederation, that in case of attack the Swiss would only defend the high Alps including the important transalpine roads and rail links. As a last resort, the army would make these routes useless to the Axis by destroying key bridges and tunnels. This plan meant that the populated lowlands - including the economic centres of the country - would be effectively ceded to the Germans. The gold reserves of the Swiss National Bank in Zürich were moved farther away from the German border, to the Gotthard Pass and to Bern.[5]

The National Redoubt assumed great importance to the Swiss in 1940, when they were entirely surrounded by Axis powers, effectively at the mercy of Hitler and Mussolini. The National Redoubt was a way to preserve at least part of Swiss territory in the event of an invasion. The Redoubt was to be manned by eight infantry divisions and three mountain brigades.[6]

Switzerland's Réduit strategy during World War II was essentially one of deterrence. The idea was to make clear to the Third Reich that an invasion would have a high cost. Simultaneously, economic concessions were made to Germany in the hope that the overall cost of a German invasion would be perceived as higher than the potential benefits. Despite this, it is clear that Hitler intended to invade eventually and that the Allied landing at Normandy as well as the difficulties faced in invading Russia were pivotal in merely delaying an invasion.[7]

Swiss policy during the Cold War adopted a more aggressive defense of the borders, relying less on a retreat to the mountains. While Switzerland was again surrounded by an alliance, NATO was not considered a threat to Swiss national existence. The Swiss strategy sought to exact a high price from any direct ground attack on Swiss territory. Control of the Alpine crossings remained a cornerstone of the Swiss strategy of neutrality. The dense network of passive and active barriers and large and small fortifications allowed considerable flexibility in the disposition of Swiss forces, and represented an almost optimal scenario of defense in depth.[6]

The strategic importance of the Alpine crossings had only increased since the Second World War, and any incursion by Warsaw Pact forces would require that they either be taken, or that terms for their use would need to be agreed upon to the satisfaction of Switzerland.[6]

In 1953 Swiss policy was formalized to place greater emphasis on the defense of the borders and population centers, and to extend the concept of defense in depth, pioneered in the Redoubt, to the entire Swiss territory. This corresponded to an unspoken reliance on cooperation with NATO to secure the flanks of Swiss territory and to resupply Swiss forces, which already purchased equipment from members of NATO. The Redoubt, with its determinedly neutralist connotations, lost priority.[8]

Many billions of Swiss Francs have been invested in building the fortifications in the mountains, which are partly still used by the army. The most important buildings of the Réduit were the fortifications of Sargans, St. Maurice and the Gotthard region. The caverns of those time were equipped with the needed infrastructure, beside cannons and howitzers they consisted of dormitories, kitchens, field hospitals, rooms for the sick and bakeries; and they provided space enough to accommodate 100 to 600 soldiers for a timespan of up to several months. Because the tensions between the western countries and the USSR cooled down and bunkers became more or less obsolete because of newer weapon systems, a great number of the Réduit buildings were closed. Some of them have been reopened as museums and can be visited.

The National Redoubt fortifications, when compared to contemporary French, Belgian, German or Czech fortifications, were much more extensive and heavily armed than the Maginot Line, the Belgian border fortifications, the Siegfried Line or the Czechoslovak border fortifications. While the Maginot fortifications were typically armed with short-barreled 75mm fortress howitzers or 120mm mortar/howitzers, the Swiss fortifications were armed with 75mm and 120mm guns, upgraded in the 1950s to 105mm and 150mm guns. The Swiss guns were typically casemate-mounted or turret-mounted long guns, not howitzers, and were more akin to naval guns than fortress guns. Because they were typically mounted on inaccessible cliffs or plateaus with an advantage of enfilade over any possible opposing force, they were not exposed to infantry attack or direct artillery fire and could afford to have exposed gun barrels. The French positions, which could be targeted by anti-tank weapons or infantry, avoided any exposed gun tubes.[9] 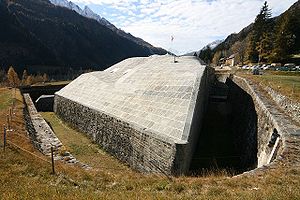 Battery Foppa Grande mounted one 105mm gun in a camouflaged turret above Motto Bartola, with three 20mm anti-aircraft guns. The position featured a mortar battery, installed in 1953. The position was deactivated in 1997 and classified as potentially historical. The position may be visited by prior arrangement.[19]

Saint Gotthard Tunnel South Portal monitored the original south entrance to the Gotthard Rail Tunnel. Portions of the original installation remain, but the tunnel entrance has been extended to the south and the historic portal no longer exists. These positions were built in 1886-87 and represent the first modern fortifications in Switzerland. A gallery links the tunnel positions back to Fort Airolo.[23]

The Redoubt positions and others in Switzerland were augmented by the Bison project, which involved the installation of anti-tank guns in new bunkers at key locations to provide a modernized pre-positioned force capable of defeating modern armor. A project to install automatic 120mm mortars was completed in 2003.[35]

Debate continues over the usefulness of the Redoubt and other Swiss fortifications. Defense Minister Ueli Maurer proposed in October 2010 to close many of the positions after mitigating environmental issues and assuring permanent safety. A decommissioning program was expected to cost as much as a billion Swiss francs.[35]

Because the Réduit strategy was essentially one of deterrence, part of it was overt and public, and played a part in the so-called "intellectual defence of the homeland", or Geistige Landesverteidigung attempting to improve the morale and cohesiveness of the nation. The Réduit strategy's use as a deterrence/propaganda tool continued through the cold war. In 1964, the army's pavilion at the Swiss Fair (Landesausstellung) in Lausanne had the shape of a giant hedgehog made of concrete.[citation needed]

Individual portions are on line at armasuisse.ch, for example the cantons of Glarus, AI/AR and St. Gallen n