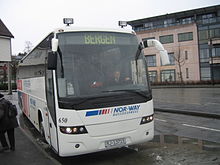 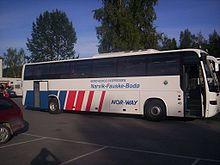 A Nor-Way bus between Fauske and Narvik

NOR-WAY Bussekspress is a Norwegian coach company, with lines in the north and south of Norway. Still, the two networks are separate. The southern network runs (within Norway) as south as Mandal, and as north as Namsos, while the northern network operates between Bodø and the North Cape or Honningsvåg. The services provide a public transport alternative where there are no train services, and also compete with trains on some routes. Some of the stretches in the Norwegian countryside are really scenic and beautiful (e.g. the Sognefjord and the western counties of Rogaland, Hordaland, Sogn og Fjordane and Møre og Romsdal), along and across fjords on ferry or bridge and on mountains. There are also international bus lines from Stavanger to Hamburg, Germany, and from Oslo to Gothenburg and Malmö in Sweden, and further on to Warsaw and Cracow in Poland.