The Walter Aircraft Engines was a company that manufactures aircraft engines, particularly the M601 turboprop. Based in Prague, Czech Republic, the company has been a subsidiary of GE Aviation since July 2008.

The company was founded by Joseph Walter, Bohemia in 1911 to produce motorcycles and motor tricycles. They started to manufacture cars in 1913, both their own models, and later the Fiat 508 and Fiat 514 under license. Car production ceased in 1954.

Walter aircraft engines were used by the Air Forces of thirteen countries before World War II.

During World War II Walter produced Argus engines under license for Germany. Production of the BMW 003 turbojet was put into preparation, but none were produced.

The Walter plant survived the war intact and in 1946 the company was nationalized as Motorlet n.e. They produced Soviet-licensed piston engines, and in 1952 production of the Walter M-05 jet engine began - this was the Soviet Klimov VK-1 engine, based on the Rolls-Royce Nene, which powered the MiG-15, and was exported to many countries. The company produced a series of Soviet-designed engines during the 1950s and 1960s, though piston engine production was closed and handed over to Avia in 1964.

In 1995, the company was privatised as Walter a.s., and in 2005 the aviation engine division became Walter Aircraft Engines. In July 2006, it was acquired by the Czech investment firm, FF Invest. In March 2007, it was announced that Walter Aircraft Engines would merge with Avia's aero-engine division.[1][dead link] The company was also merged with the precision casting company PCS.[citation needed]

In September 2007, it was announced that the Company's assets (which do not include its current facility in Prague) would be purchased by GE Aviation. The transaction was completed in July, 2008. GE's interest in Walter has to do with the former's desire to compete more aggressively with Pratt and Whitney in the small turboprop market; Pratt Whitney holds a commanding market share there. Walters builds the M601 engine, which GE hopes to refine and position against Pratt and Whitney's PT6. Walter currently builds 120 M601 engines per year; GE intends to increase production, by 2012, to 1,000 engines per year.[2] 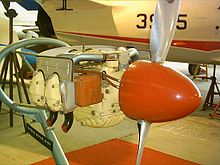