The Green-cheeked Conure (Pyrrhura molinae), is a small parrot of the genus Pyrrhura.They belong to several genera within a long-tailed group of the New World Parrot subfamily Arinae. The term "conure" is used primarily in bird keeping, though it has appeared in scientific journals.[2] It is native to forests of South America.

The Green cheeked Conure is 26 cm (10 in) long and weighs 60 to 80 g. It is mainly green, with a brown/black/grey crown, white bare eye-rings, green cheeks, blue primary wing feathers, a grey beak, and its long pointed tail is mostly maroon. It has short transverse striations on its breast and a red abdominal area. Males and females have an identical external appearance.[3]

The Green-cheeked Conure has six subspecies:[3][4]

P. m. sordida naturally occurs as a green morph or as a yellow morph,[3] The yellow morph is also called the Yellow-sided Conure,[5] and was once erroneously considered to be a separate species, P. hypoxantha.[6]

The Green-cheeked Conure is similar to the Maroon-bellied Conure (P. frontalis),[5] and formerly there have been speculations that they were conspecific.[6] It is also similar in appearance to the Blaze-winged Conure and the Black-capped Conure.[5]

The Green-cheeked Conure occurs in west-central and southern Mato Grosso, Brazil, through northern and eastern Bolivia to northwestern Argentina and northern Paraguay. Its habitat is forests and woodland, where it usually forms flocks of 10 to 20 individuals at treetop level, or larger flocks where there is plenty of food. Also a popular parrot pet for families and individuals.[5]

Scratching his neck with a corn cob (an example of tool use).

The Green-cheeked Conure eats various seeds and fruits and probably other kinds of vegetable matter. The average clutch is 4–6 eggs. Average incubation is 24 days, varying from 22 to 25 days. They have a less piercing squawk than Sun, Nanday or Jenday Conures and can easily learn tricks and (limited) speech.[citation needed]. Green cheeks have also been known to use tools (especially their own feathers for scratching hard to reach places).[citation needed] 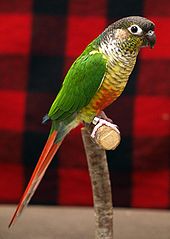 Green-cheeked Conure are common in aviculture and are popular companion parrots. They are playful, affectionate and intelligent, known as having a "big personality in a small body". They can learn to talk, albeit with a limited vocabulary and a gravelly voice. They like to be held (although some like it more than others) and can learn tricks such as lying on their backs and "kissing." Along with other Pyrrhura Conures, they can be quite loud, therefore not making acceptable pets for apartment dwellers. They can be prone to biting, particularly when young, but an owner can cure this behavior with patience and time. They love fruits, (especially bananas and raisins), and seeds such as sunflower, safflower and hemp seeds; all things found in their natural environments. Green-cheeked Conure also love table food; they are flock animals and love to eat with their family. They can eat potatoes, carrots, corn, well cooked meat, bread, pasta, plain popcorn, and even eggs. A clipped and/or caged bird can become obese from eating too many fatty seeds such as sunflower seeds and peanuts. A bird-pellet diet with a calcium supplement will give them the proper nutrition, but should not be used exclusively due to the presence of trace chemical additives and bonding agents not found in the Conure's natural habitat.[citation needed] A good rule of thumb is 30% pellet diet, 10% seeds, and the rest being fresh foods- fruits, vegetables, or cooked food. Some Conures with health problems related to the kidneys[citation needed] should not be fed pellets. Green-cheeked Conures can live to 30 years with proper care, though the average lifespan is typically 10 years due to owner neglect.[7]

In addition to the natural color forms, color mutants have been selectively bred in aviculture:

There is also a green/red/blue apple mutation which is not very common but has been seen.