The Mobile Cop Jiban (機動刑事ジバン, Kidō Keiji Jiban?) is a Japanese tokusatsu television series; part of the Metal Hero Series produced by Toei, aired by TV Asahi in Japan from January 30, 1989 to January 29, 1990 with 52 episodes and a feature movie aired on July 17, 1989.

According to Toei's International Sales & Promotion Department, the series' English title can be referred to as Jiban.[1]

According to creator Keita Amemiya, the premise for the series was partly based on American character Robocop, as Jiban is often considered as RoboCop's Japanese counterpart. In addition, several action scenes resemble or are almost completely identical to the ones from RoboCop's first film.

The opening catchphrase of the series is: "This is the drama of a girl's and a young man's hearts which love people and protect justice." (これは人を愛し、正義を守る若者と少女の心のドラマである。, Kore wa Hito o Aishi, Seigi o Mamoru Wakamono to Shōjo no Kokoro no Dorama de aru.?)

Naoto Tamura, a new detective in Central City was killed by a Biolon agent in the line of duty. Doctor Kenzou Igarashi, a man whose experiments had been responsible for the Biolon syndicate's existence, brought the man back to life as a robot detective, Jiban. Eventually Madogarbo and Rhinonoid killed Jiban, who returned to life again as Perfect Jiban (basically the same design as the original, but with a blue-colored metal body and three new weapons). In the finale, Biolon destroyed Jiban's base and transformed Madogarbo into false Jiban. Jiban defeated his duplicate and ultimately Gibanoid, the true form of Biolon's leader Doctor Giba. The victorious Jiban then learned that Mayumi Igarashi, the one civilian that knew his secret, had been his missing younger sister all along. 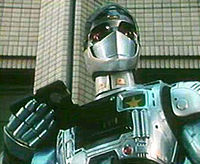 Naoto Tamura/Mobile Cop Jiban
A human revived as a cyborg by Doctor Igarashi to fight Biolon. He is capable of reverting to his human identity at will. He holds the rank of police commissioner (as a robot) and detective (as human). Jiban's programming enables him to follow these directives:

In human form, Naoto often plays the fool and is looked on down by Youko and Kiyoshiro for this, but Youko begins to warm up to him after realizing he could be Jiban.

Mayumi Igarashi
The only civilian who knew Jiban's secret identity. She lost her memory in battle, after falling from a waterfall, because, Biolon put in her finger a Bomb Ring. If Jiban approaches her, the bomb will burst. She called Naoto her 'big brother,' only to find that she was really his lost sister in the finale.
Shun'ichi and Shizue Igarashi
Mayumi's (adoptive) parents. Shunichi is the son of Doctor Kenzou Igarashi but is not a scientist. Relocated as witnesses to Biolon, they resumed their life as Mayumi's foster parents in the finale.
Doctor Kenzou Igarashi
Started the Jiban's project to counter Biolon, the results of his biological experimentation. He died when Jiban was built.
Youko Katagiri
A female detective of Central City. Naoto's senior. Manly sharpshooter who could not figure out that Naoto was Jiban.
Kiyoshirou Muramatsu
Elite detective of Central City with a liking for Youko.
Seiichi Yanagida
The head of the Police Department. He cooperated with Doctor Igarashi in the Jiban Project two years earlier. He collaborated with Jiban after Igarashi's death. He died when Jiban's base was destroyed.
Section Chief Takeko Bandou
The Central City Section Chief of Detectives. Got headaches trying to keep the peace in jurisdictions where strange events occurred, no thanks to Biolon.
Michiyo Matsumoto
A tea server of the Detectives' Section of Central City Police Department. She is always cheerful and encouraging.
Boy/Harry Boy
Jiban's robotic assistant. He stays at his secret base. Originally he was simply Boy, an immobile camera-like robot who had to give instructions to Mayumi to operate the control center, but then his computer was transferred to panda-like "Harry" (a robot devised by another student of Doctor Igarashi's) and began substituting for the amnesiac Mayumi. He died when Jiban's base was destroyed.
Ryou Hayakawa
A drifter who takes in Mayumi after she loses her memory, mistaking her for his dead sister, Midori. He initially refers to her by that name but later refers to her by her own name Mayumi after reading a missing person's notice, although Mayumi does not tell him her true origins (since her memory is faulty). In the scuffle, Mayumi goes away, unable to remember what just happened. He died in Episode 46, when Jiban removed the Bomb Ring from Mayumi's finger with a very precise shot, without hurting her. Ryou took the ring and ran, to throw it out, but was killed in the resulting explosion. He is played by Ryouhei Kobayashi Who would later play Fumiya Hoshikawa / Five Black in the 1990 sentai series Chikyuu Sentai Fiveman.

Jiban's Badge
It can be used as a communicator to contact Harry Boy, Seiichi and Mayumi in Jiban's Base or used to summon any of his vehicles, as well as to control their armaments electronically.

Every episode, when Jiban faces his Bionoid enemy, he ejects his badge from his waist and shows it to the monster, reading a code of articles and laws that served as his directives (much like the CPU Directives in RoboCop, but giving him a greater freedom instead of restraining it): 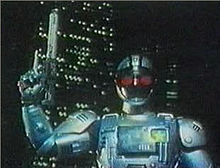 The Maximillian Type 3 can also perform the following moves and techniques:

Daedalus
Jiban's personal cannon. Required to perform the Daedalus Bombard Technique, which is used to finish off foes. It can be made into a Jetpack jet to enable Jiban to fly short distances. 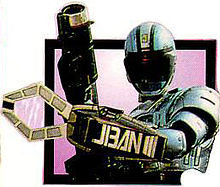 An armed force organized by the mysterious scientist Doctor Giba intending to take over Japan by means of narrow attacks rather than large-scale destruction. Their theme/weapon is biochemistry.

Doctor Giba
A brown-haired, bearded human-looking leader and founder of Bioron. His real identity is Gibanoid, a bio-monster born by accident from the chemical waste of Doctor Igarashi's National Science Academy Bio Laboratory. As a result, Giba is filled with malice for humans. He assumed his true form in the series finale, using Mayumi as a shield to escape in his ship. He died while fighting Jiban on his ship as it crashed into the mountainside.
Marsha and Karsha
The first bio-lifeforms created by Kiba, his secretaries and intermediaries between him and his Bionoid agents. They can transform into small spiders (for spying on people), and assume their inhuman "Battle" forms (Battle Marsha and Battle Karsha), armed with energy whips. They were killed in the series finale by Doctor Giba for failing to kill Jiban.
Bubi and Muku (Pugui and Muguie in the Brazilian dub)
The cute and not so-cute creatures living in Bioron's base. Muku was one of Jiban's foes in early chapters, in giant size, but only as a distraction. The 4 critters had a tendency to annoy Marsha and Karsha with their Commentary of what the 2 recently did during that episode. Sometimes just showing up once to be used as target practice by the Bionoids demonstrating their powers. The 4 became friends with Mayumi when she told them about a Mothers love and she tried to defend them from Marsha and Karsha who attacked the critters for saving Mayumi's life by Defusing the bomb in Fake Momnoid. They hung out with Mayumi in the finale.
Madogarbo (17-51)
A Jiban Cyborg Killer created by Doctor Giba as a counter to Jiban. Using power from Queen Cosmos, she and Rhinonoid are able to kill Jiban in Episode 34, but he is resurrected as Perfect Jiban. She later assumes his total appearance to attack him by having his Reson, Spylas and Vaican attack Jiban making them believe Jiban was Madogarbo. She even got as far as damaging Jiban so badly that he went Blind but Mayumi's Despair at seeing her brother about to be killed caused what energy of Queen Cosmos was left to gather and blast Fake Jiban turning her back into regular Madogarbo she was then killed by jiban.
Queen Cosmos (28-46)
A lunar life form resembling a human woman (but actually a floating rock like starfish with a long tail) intent on conquering Earth to establish an all-woman empire. She appeared in episode 28 but did not reveal her name till episode 34. In her own words, she is made of space garbage and came from a place that was cold and ugly lacking anything beautiful. Thus her obsession with having everything beautiful and being called beautiful herself. She is more powerful than the other Biorons (except Doctor Giba himself), she allies with them to destroy Jiban. Her Jewelry turns into Parasite creatures: Earring into a Skull patterned Ladybug that would infuse into Jiban distorting his Circuitry and her Brooch would turn into a spider creature blasting Jiban with Tiny powerful balls of light. Her bracelet was able to transform into a Snake creature wrapping around ones neck to control their mind. In Episode 46, she was defeated by Jiban.
Golem Cosmos (37)
A off-shoot of Queen Cosmos herself, this entity was created to be her champion from a piece of herself. The creature was extremely powerful, armed with a crescent sword and shield, she very nearly defeated jiban. Until he grabbed her sword wrist with Powerbreaker, twisting her wrist and impaling her with Needricker. She then turned back into her clay statue state and dissolved.Weapons: A Long silvery sword, shield, energy blasts from sword and laser blasts from eyes.
Masques
The mass-produced grunt human-like life forms armed with knives, guns, machine guns and bazooka. They can disguise themselves as humans and regenerate lost limbs. A determined human (usually Yoko and sometimes Kiyoshiro) can take them out by shooting them in the head or chest or by physically choking them out.

Monsters of the week, the product of Doctor Kiba's research. They can disguise themselves as humans.

A movie for the series, entitled The Mobile Cop Jiban: Great Explosion at the Monster Factory of Fear, was released on July 15, 1989 Special as part of the 1989 "Manga Matsuri" Special Festival.

Jiban has also been broadcast in other countries, dubbed in their national language.

Jiban's episodes and movie has been released in Japan in several VHS tapes. Though it had been obscure for a long time with the rest of the other metal hero TV shows, there has been sightings of a DVD release. It is most likely subtitled in other languages such as Portuguese in bootlegged form as there has been no word from Toei officials if Jiban would receive an official release in Japanese or licensed release in foreign subtitled languages such as English.