Minsk Passazhirsky (Minsk Passenger Station, Belarusian: Мінск-Пасажырскі - Russian: Минск-Пассажирский) is the main passenger rail terminal in Belarus. It is located in the centre of Minsk. It is sometimes called Minsk Ploshchad Lenina due to the metro station serving the terminal, or simply Minsk.

The station was built in 1873 as Vilenski vakzal, Vilnius station (Belarusian: Віленскі вакзал Russian: Виленский вокзал). The initial wooden building was demolished in 1890 and rebuilt in stone. During World War II Minsk railway station was completely destroyed. It was rebuilt in 1945-1946 and served until 1991. The new building of Minsk-Passazhyrski railway station was built in 1991-2002. Its construction was delayed due to financial difficulties. However now Minsk boasts one of the most modern and up-to-date railway stations in the CIS. There are plans to move all suburban rail traffic from Minsk-Passazhyrski to smaller stations Minsk-Uskhodni (East), Minsk-Paudnyovy (South) and Minsk-Paunochny (North) by 2020.

Minsk Passazhirsky is the hub of national passenger transport. It is also served by several international trains to various countries of Europe, mainly to Russian and Ukrainian destination. Some of the international relations are the Vienna-Moscow express[3], the Amsterdam-Moscow EuroCity, the Sofia-Minsk express[4], the Minsk-Irkutsk express, the Pribaltika express Riga-Odessa and the Sibirjak express from Berlin to Novosibirsk, Ufa, Astana (in Kazakhstan), Adler and other Russian destination.

It is the center, with the neighbour Minsk Institut Kultury station, of a suburban rail[5] linking the capital to several cities and town of its suburb in the district and through the region.

The station is served by Minsk Metro at Ploshchad Lenina station (Lenin Square), part of the Moskovskaya Line. The station is also served by the tramway and by trolleybus. 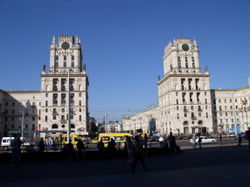 The Stalinist architecture of two buildings at the Station Square, located in front of the terminal