Mihai Gavrilă (Romanian pronunciation: [miˈhaj ɡaˈvrilə]; b. October 16, 1929, Cluj) is a Romanian quantum physicist, member of the Romanian Academy since 1974. He made fundamental contributions to quantum theories of electromagnetic interactions with atoms. His parents were Ion and Florica Gavrilă (née Vișoiu). His father taught medicine and his mother taught English at the University of Cluj.

He began his higher education at the Gheorghe Lazăr High School in Sibiu, and completed his studies at the Seminarul Pedagogic Universitar of the University of Cluj. Then, in 1948, he enrolled in the School of Mathematics and Physics of the University of Bucharest from which he graduated with a major in physics, and a minor in radiotechnology, in 1953. While still a student, between 1951 and 1953, he became a teaching assistant to Professor Eugen Bădărău in the Optics Laboratory of the School of Physics.

In 1953, he was accepted for doctoral studies in theoretical physics by Acad. Professor Dr. Șerban Țițeica in the School of Physics at the University of Bucharest, and completed successfully his doctoral studies with the Ph.D. thesis entitled ``The Relativistic Theory of the Photoelectric Effect", apparently following in Albert Einstein's and Alexandru Proca's footsteps.[1][2] He published in 1959 the main results of his Ph.D. thesis in a peer-reviewed paper in Physical Review.[3]

In 1956, Gavrilă was appointed Assistant Professor in the Department of Thermodynamics, Statistical Physics and Quantum Mechanics of the School of Physics of the University of Bucharest, where he was subsequently promoted to a lecturesip, an Associate Professorship in 1962, and to full Professorship in 1968. He studied also a visiting scholar at several major physics centers around the world: Joint Institute for Nuclear Research, JINR (at Dubna in Russia), Joint Institute for Laboratory Astrophysics, JILA (Boulder, Colorado, USA), International Centre for Theoretical Physics, ICTP (Trieste in Italy), and the University of Pittsburgh, (Pittsburgh, Pennsylvania, USA). He taught courses on Quantum Mechanics, Group theory representations and Lorentz group transformations.

He was elected a corresponding Member of the Romanian Academy in 1974. However, in spite of his election to the Academy, he refused to become entangled in any political affairs under the increasingly dictatorial communist regime, and finally he had to leave his country for Norway in the autumn of 1974. At first, he worked at the Norwegian University of Science and Technology, NTNU (in Trondheim) and at the Royal Institute of Technology, KTH, in Stockholm. In 1975 he settled in Amsterdam at the FOM Institute for Atomic and Molecular Physics, AMOLF, where he became the theoretical physics group leader. Since 1992 he works as a Senior Scientist at the Institute of Theoretical, Atomic, Molecular and Optical Physics (ITAMP) of the Harvard–Smithsonian Center for Astrophysics, in Cambridge, Massachusetts.

After 1990 he was able to visit Romania several times and continued to contribute also to the development of theoretical physics research in Romania. 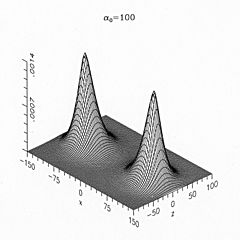 Atomic Dichotomy. The wave function of atomic hydrogen in a high frequency, ultra-high intensity laser field, represented in a plane passing through the symmetry axis of the laser field. α0 = I1/2ω-2, where I is the laser field intensity, and ω is its frequency in atomic units.

Mihai Gavrilă completed in 1977 his previous work on the relativistic theory of the photoelectric effect in the inner atomic orbitals that he had begun in his PhD thesis in 1958; thus, he applied radiative corrections to his previous calculations[4] He also investigated two-photon excitations and the elastic photon scattering amplitude in the hydrogen ground state,.[5][6] He completed also the non-relativistic Compton scattering calculation for an electron in the K-shell[7] These calculations were then extended in the dipolar approximation to the study of Compton scattering in the L- shell.[8] The results of his investigations confirmed the presence of the infrared divergence—as predicted in quantum electrodynamics, and also predicted the presence of a resonance in the spectrum of the scattered photons.[9][10]

Interactions of laser beams with atoms

He began these studies in 1976 in connection with experimental studies carried out at AMOLF by group of Marnix van der Wiel. Initially, his interest was focused on multi-photon transitions treated by non-perturbation quantum theory. However, he switched to perturbation methods in quantum theory when it became possible experimentally to attain ultra-high laser intensities at very high frequencies based on the High-Intensity High-Frequency Floquet Theory (HI-HFFT).[11][12] His investigations lead to very surprising results—the phenomenon of ``atomic dichotomy"[12][13][14] in which the hydrogen atom when it is placed in a linearly polarized field exhibits a splitting of its spherical charge distribution into two lobes that oscillate in the laser field. On the other hand, in a circularly polarized laser field, the hydrogen atom's charge distribution takes on a toroidal shape with its symmetry axis oriented along the propagation vector of the field and passing through the center of the atom. His theory also predicts for two-electron atoms the appearance of a new bound state which is induced by the ultra-intense laser field;[15][16] these are 'light-induced excited states'. Apparently paradoxical events do occur in the presence of the extremely intense laser field: a proton can bind more than two electrons thus leading to the formation of hydrogen negative ions with multiple negative charges that are relatively stable.[17] Other novel and unexpected properties of molecules were also predicted in the presence of such ultra-intense laser fields.[18]

Publications at the Library of Congress

He also managed several projects financed by EU and Stichting FOM. He coordinated successfully the project Atoms in Super-intense, Femtosecond Pulses involving four experimental laboratories and theoretical groups from France, Belgium and the Netherlands, to build an ultra high-power laser at the Laboratoire d'Optique Appliquée (Palaiseau in France).