A matha (also written math or mutt) Sanskrit: मठ maṭha) is a term for monastic and similar religious establishments of Hinduism[1] and Jainism. A matha is usually more formal, hierarchical, and rule-based than an ashram. 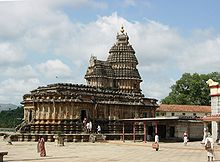 The oldest matha follow the Advaita Vedanta tradition and they are headed by Shankaracharyas, a title derived from the name of Ādi Śankara, a prominent religious teacher of the eighth century.[2] Ādi Śankara established the following mathas, with each of his four main disciples in charge: Sureshwaracharya, Hastamalakacharya, Padmapadacharya, and Totakacharya respectively. The four Āmnāya mathas founded by Ādi Śankara, all of which are Smartist, are:

In addition, these Advaita mathas also claim they were founded by Ādi Śankara:

In the Sri Sampradaya tradition of Ramanuja: 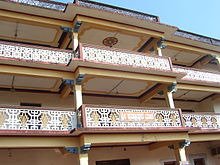 Dvaita philosophy was founded by Madhvacharya. He established 8 mathas directly and several others were also established by him and also by his disciples.

There are many other mathas. These mathas were all formed by the disciples of Śrī Madhvācārya. Śrī Padmanābha Tīrtha was the first disciple of Madhvacharya who formed most of the mathas except the matha which have the right to perform Puja to Krishna in Udupi. 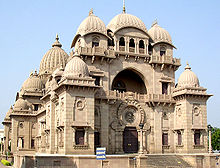 Examples of other Dvaita mathas are: 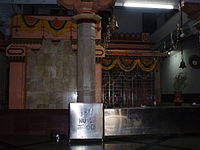 In Kongu Nadu, there are mathas run by the kulagurus or caste-clan gurus. There are around sixty such mathas, both Smartist and Shaiva, who guide people from the various native castes of this region.[3] Their acharya is Sringeri Sharada Peetham.

The term matha is also used for Jain monasteries: