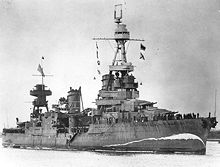 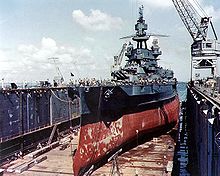 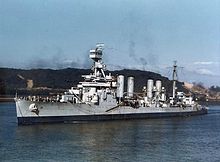 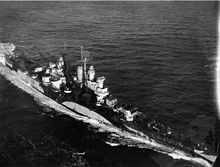 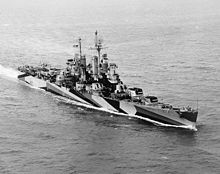 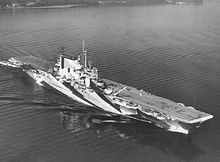 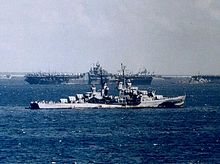 Ship camouflage is a form of military deception in which a ship is painted in one or more colors in order to obscure or confuse an enemy's visual observation. There are three types of marine camouflage that have been used: blending or crypsis, in which a paint scheme attempts to hide a ship from view; deception, in which a ship is made to look smaller, or that it has a different speed or heading; and disruption, a chaotic paint scheme which tries to confuse any estimate of distance or direction.

Prior to World War One

The first recorded instance of ship camouflage was in the years 56–54 BC during the Gallic Wars, carried out by Julius Caesar who sent his speculatoria navigia (scout ships) to gather intelligence along the coast of Britain, the ships painted entirely in green, their crews dressed in green.[1]

In the Age of Sail, deception was often used by ships, and paint was applied ad hoc by ships' captains for temporary tactical advantage. A ship might be painted to look like another, it might have its cannon ports hidden by painted canvas to look harmless, or it might have additional cannon ports painted on to appear more powerful. As one example among many, for one of his battles during 1778–1782, American privateer Jonathan Haraden hid the guns of his ship the General Pickering, to appear as if it were a slow merchant ship. Haraden allowed his ship to be approached at close range by a much faster British privateer, then he quickly pulled the painted canvas away and delivered a full broadside, capturing the enemy.[2]

In the American Civil War, camouflage paint was applied by both sides during the Union blockade of 1861–1865. Blockade runners aiding the Confederates sometimes painted their ships all in mist-gray, to hide themselves in coastal fog.[3][4] One Union blockade crew may have painted their rowboat white, and its oars, and wore white clothing for a night reconnaissance patrol up an enemy-held river.[1]

In the 1890s, German and French fighting ships were being painted gray.[5] American interest in ship camouflage was given official funding in 1898 during the Spanish–American War when white, light gray, and medium gray paint schemes were evaluated for their ability to hide a ship as seen against the distant sky on the horizon.[6] Artist Abbott Handerson Thayer investigated countershading color schemes to disrupt natural shadows.[7] British ships began being painted gray in 1903.[5] In 1913, American camouflage experiments included a submarine painted in a three-color pattern of broad vertical stripes designed by William Mackay, using white stripes to separate green and blue stripes.[1]

At the beginning of World War I, the increasing range of naval guns, and the great fear of high-speed, long-range torpedoes used against warships and merchant ships caused a significant increase in the use of ship camouflage.[5]

These schemes were used on merchant ships and smaller warships. Battlefleets continued to be painted in various shades of gray.

In 1935, the United States Navy Naval Research Laboratory began studies and tests on low visibility camouflage for ships. Research continued through World War II to (1) reduce visibility by painting vertical surfaces to harmonize with the horizon and horizontal surfaces to blend with the sea, or (2) confuse identity and course by painting obtrusive patterns on vertical surfaces. Some camouflage methods served both purposes:[8]

Except in measures 11 and 21, decks were a blue gray shade.

Between the wars, British naval ships were generally dark gray in northern waters, and light gray in the Mediterranean or tropical waters. In the first year of the war British captains largely painted their ships as they saw fit. As the war continued, the Admiralty introduced various standardized camouflage schemes.

An experimental coating able to change colour was tested on Royal Navy submarines. On suggestion by Professor Leslie Cromby, lead oxide was applied to the hull, enabling it to become black on application of a solution of sulphite and sea water for night operation. For day sailing, a solution of hydrogen peroxide and sea water would be applied, producing sulfate and returning the hull to a white colour desirable for diurnal conditions.[10]

Other navies in World War 2

The Royal Canadian Navy experimented with variable diffused illumination of one side of ships to match horizon light levels and minimize silhouettes during prolonged arctic twilight or aurora borealis.[8]

German Kriegsmarine ships before the Second World War were either light gray overall or had dark gray hulls. Many retained this scheme during the war. Others had dazzle camouflage, usually in combinations of pale gray, dark gray and sea blue. Smaller ships were painted a very pale gray to blend in with the mists of northern European waters. Larger ships often had their bows and sterns painted a different shade from the rest of the hull. German decks were a very dark gray.

Italian ships of Mussolini's navy retained its pre-war scheme of light gray overall for its smaller ships, but the larger units mostly had dazzle camouflage of dark gray, light sea blue, light sea green and light gray. Italian foredecks had a high-visibility pattern of red and white diagonal stripes so that their own aircraft would not attack them.

Japanese ships largely retained their pre-war dark gray paint scheme, although some major units like aircraft carriers changed to a dark sea green. Some aircraft carriers had their flight decks painted in a dazzle camouflage, but this seems to have been ineffective.

The French Navy used light gray before the war and under the Vichy regime. Free French ships that operated with the British adopted one of the British schemes. Those that were refitted in American shipyards were usually repainted in the American measure 22.