The Large and Small Magellanic Clouds.

The two Magellanic Clouds (or Nubeculae Magellani[1]) are irregular dwarf galaxies visible in the southern hemisphere, which are members of our Local Group and are orbiting our Milky Way galaxy.[2] The two galaxies are:

The Magellanic Clouds have been known since the earliest times to the ancient Middle Eastern peoples. The first preserved mention of the Large Magellanic Cloud is by the Persian astronomer Al Sufi.[3][4] In 964, in his Book of Fixed Stars, he called it al-Bakr ("the Sheep") "of the southern Arabs"; he noted that the Cloud is not visible from northern Arabia and Baghdad, but can be seen at the strait of Bab el Mandeb (12°15' N), which is the southernmost point of Arabia.[1]

In Europe, the Clouds were first observed by Italian explorers Peter Martyr d'Anghiera and Andrea Corsali at the end of the 15th century. Subsequently, they were reported by Antonio Pigafetta, who accompanied the expedition of Ferdinand Magellan on its circumnavigation of the world in 1519-1522.[1] However, naming the clouds after Magellan did not become widespread until much later. In Bayer's Uranometria they are designated as nubecula major and nubecula minor.[5] In the 1756 star map of the French astronomer Lacaille, they are designated as le Grand Nuage and le Petit Nuage ("the Large Cloud" and "the Small Cloud").[6] 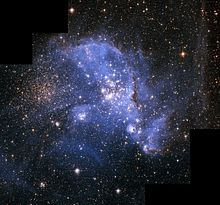 The Large Magellanic Cloud and its neighbor and relative, the Small Magellanic Cloud, are conspicuous objects in the southern hemisphere, looking like separated pieces of the Milky Way to the naked eye. Roughly 21° apart in the night sky, the true distance between them is roughly 75,000 light-years. Until the discovery of the Sagittarius Dwarf Elliptical Galaxy in 1994, they were the closest known galaxies to our own. The LMC lies about 160,000 light years away,[7][8][9][10] while the SMC is around 200,000.[11] The LMC is about twice the diameter of the SMC (14,000 ly and 7,000 ly respectively). For comparison, the Milky Way is about 100,000 ly across.

Aside from their different structure and lower mass, they differ from our Galaxy in two major ways. First, they are gas-rich; a higher fraction of their mass is hydrogen and helium compared to the Milky Way.[14] They are also more metal-poor than the Milky Way; the youngest stars in the LMC and SMC have a metallicity of 0.5 and 0.25 times solar, respectively.[15] Both are noted for their nebulae and young stellar populations, but as in our own Galaxy their stars range from the very young to the very old, indicating a long stellar formation history.(Chaisson and McMillan)

The Large Magellanic Cloud was host galaxy to a supernova (SN 1987A), the brightest observed in over four centuries.

A recent French paper[16][17] referenced in a Discovery Magazine blog suggests that the clouds may be ejected from a collision that formed the Andromeda Galaxy 6 billion years ago. However, this is an unlikely scenario, and many astronomers believe the Magellanic Clouds are natural remnants of the hierarchical process of galaxy formation that formed our Milky Way Galaxy.

It has been proposed by astrophysicists D. S. Mathewson, V. L. Ford and N. Visvanathan that the SMC may in fact be split in two, with a smaller section of this galaxy behind the main part of the SMC (as seen from our perspective), and separated by about 30,000 ly. They suggest the reason for this is due to a past interaction with the LMC splitting the SMC, and that the two sections are still moving apart. They have dubbed this smaller remnant the Mini Magellanic Cloud.[18][19]